Well it’s that time of year again and I’d like to wish all….no, hold on, you can go to virtually any other website and get the blog-standard, generic ‘peace to all’ message.

Frankly speaking, when it comes to people, it’s true to say that some people weren’t in my life as much as I wanted them to be this year and some weren’t in it at all. Some were in it too much for comfort; others retained a healthy balance and some fell over. For some, it will have to be an accident if we ever meet again (and we're not talking serendipity). Next year, hopefully, I will readjust the balance again.
Meanwhile, the time for shopping is just about over (until the sales start) and this brings many things on which to reflect. How many half-price chocolate oranges has one been offered? How many pushchairs can be reasonably fitted down the aisles of Boots before it becomes impossible for anyone to move in any direction? Is it really useful to offer ‘3 for 2’ on Dalek Sec masks? Can it be right that cards now cost more than presents? Why do drunks catch the bus when it would be safer (for us) if they drove home, and why do so many of them pretend to be Scottish and hurl unlikely accusations, such as ‘You strangled my parrot, didn’t ye?’ which nobody else in the bus queue can (apparently) hear?
Of course, choosing the right presents isn’t any easier now than it was when the whole thing started. Rewind a couple of thousand years and this could well have happened…
Scenario: ‘JC’ and a ‘Friend’. 18 years after being left three gifts, JC is now old enough to understand what they are. His friend, official custodian of the Magi’s offerings, opens the trunk and reveals all.
JC: (Excited) Right! Time to find out what my first ever presents were.
F: This is the first one. Apparently it’s Myrrh.
JC: Eh? What’s that for?
F: I think it’s some sap-based substance, often used in the lubrication of incense.
JC: Crikey! You’d better put that back in the trunk straight away. What’s next?
F: Frankincense!
JC: Sounds monstrous. Any idea what it’s for?
F: Dunno - it’s a sort of aftershave I think. I’ll just pull out the stopper and have a - Christ, it stinks!
JC: Oh, does it? Not much point in using that then. To make sure of it I’ll give up shaving. (And he did) So what was the third gift? I don’t suppose they left anything useful, like gold?
F: (Looking at the ground.) Err, no chief, we didn’t see any gold. The third gift was…err...a pair of socks.
JC: Socks!? Socks…with sandals?? I don’t think that will work. You keep them.
…or maybe it didn’t happen like that at all. Who knows? One thing is certain: no man is ever so confident in his ability to buy presents that he ever destroys the receipts. He would never know where to find them, but that’s not the point.
Because it’s the festive season, just as in your favourite TV cop show, when they always have a special Christmas crime to solve, so Marsh Towers offers you a bit of fun with some unusual chess problems to tackle. For this one, Black doesn’t move at all. Your task is to find out how many different ways you can give a check to the Black King in three moves. 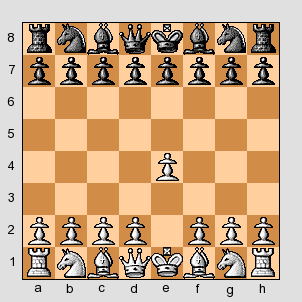 White’s first move is 1 e4. Can you construct a game is which the final move is a Knight taking a Rook and delivering checkmate?
Just to balance things up for 1 d4 players… 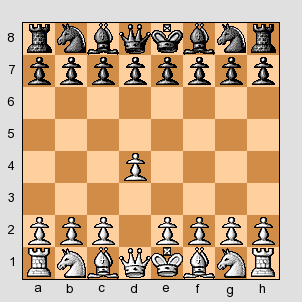 Black is obliged to copy your moves. Under those circumstances, how soon can you force a checkmate?

Meanwhile, to all those reading this at home…what are you doing in my house!?

Nice way to work off the xmas pies :D

Puzzle 3 I only managed move 8.

I'm sure there is a better way.

Well done Dan and Bill, 23 is quite correct for the first puzzle.

You need to try harder on the other two though!

I have the feeling that the fact that my solution works with either ...h5/Rh6 or ...a5/Ra6 means that something's wrong, since I assume the solution is unique (except perhaps for move ordering). Hmm.

might be way off becasuse i have been drinking :D

At six moves, the intended solution to No.3 is still a couple of moves too long! Have a nice cup of tea and try again :-)

This came to me whilst driving the car :)

I'm guessing the answer is 4 moves, so I'm away to find my thinking cap.

3 different methods, all end on move 6 :( I'm pretty sure the solution is 5 moves.

For the moment I'm working on the assumption that black delivers mate, as it seems like the kind of tricky twist I would expect..

It's always a good feling to solve these blighters, isn't it? :-)