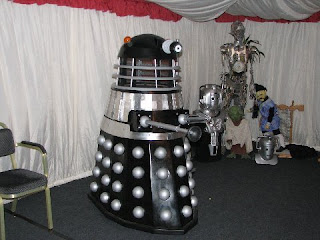 Dimensions 2007
10th & 11th November
Holiday Inn, Washington
(Photos by Gary Marsh)
What do you mean…you’ve never been to a Doctor Who Convention? You don't know what you are missing...
Dimensions 2007, the latest in the highly successful series of North East Doctor Who conventions, saw a change of venue for the first time since 2002. This time it was held in Washington (Durham) and approximately 350 people came along to join the fun.

The two basic activities at conventions are:
1) The guest talks/interviews
2) The guest signings
This was the sixth such Dimensions convention I’ve attended; every single one has maintained a very high standard and there’s been an incredible number of different guests over the years including Doctors 5-8 (and more than once each!).
This year’s Doctor was none other than Colin Baker, the sixth incarnation of our favourite Timelord. Although his era on TV isn’t always seen as one of the greatest successes - in fact, it was a very troubled time - Colin has always maintained a very positive stance with the show and is a thoroughly nice chap. 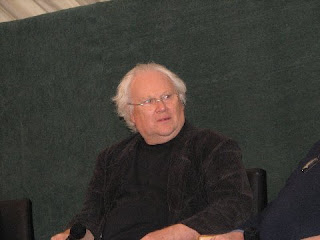 His performances for the Big Finish series of audios are extremely highly regarded and to many, at least in the world of CD adventures, he is the Doctor.

Elisabeth Sladen was a popular guest too; she is famous all over again - especially with young people - thanks to her spin-off show, The Sarah Jane Adventures. 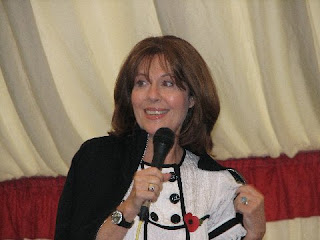 Links with the classic years of Dr Who went back all the way to the 1960s. Anneke Wills (Polly) was a welcome addition to this year's guests. 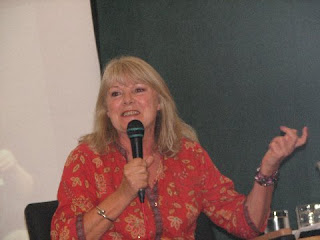 It often happens that a guest has to cancel their attendance fairly late on due to work commitments. The organisers pulled off a major coup when they announced that one of their late replacements was none other Honor Blackman! 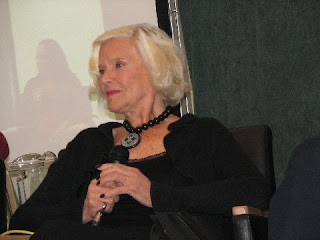 Although better known as Cathy Gale in the early days of The Avengers and then as Pussy Galore in Goldfinger, she did indeed appear in four episodes of Dr. Who in the 1980s. Her presence was clearly one of the highlights of the weekend. 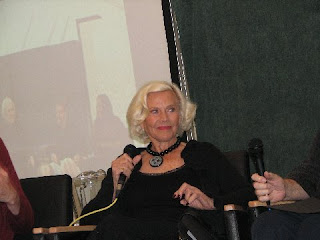 It’s the first time I’ve seen John Levene (UNIT’s Sergeant Benton). He comes across as a complex character. He was there the whole weekend and seemed in good humour on the Saturday, when he shared a panel with Katy Manning (Jo Grant). 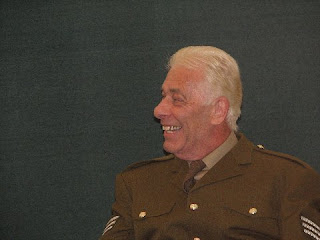 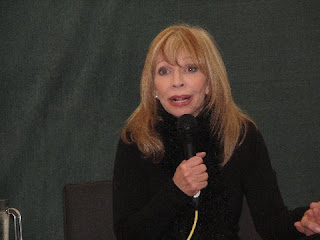 However, he was rather melancholy the following day. His solo panel contained many quite morose moments and was not really in keeping with the general trend of the weekend which was, after all, a celebratory affair. 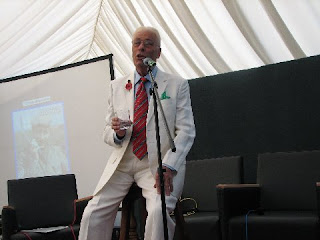 It’s always good to hear from guests with a different perspective on the show. Graham Cole - best known as PC Stamp in The Bill - was the man inside monsters such as the Cybermen, Melkur and the Marshmen. 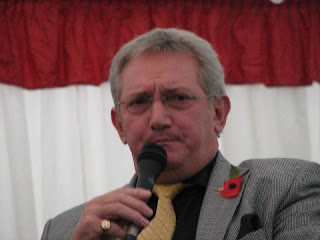 He had lots to say about trials and tribulations regarding such difficult work. An extraordinary amount of patience is required to spend seemingly endless hours encased in rubber and plastic.

Timelash, as story form 1985 and recently released on DVD, was written by Glen McCoy and he was on hand to talk about his experiences from script to screen. He gave an interesting insight into the somewhat haphazard procedures of the time. (The picture shows Glen with Nicola Brynat, who played Peri.) 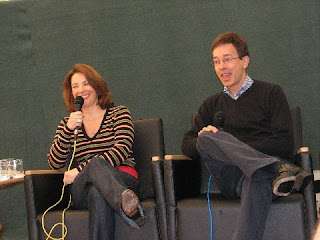 The guest talks can take several different forms. Sometimes it’s a straight forward one-to-one with an interviewer, sometimes it’s a panel of several people. Occasionally one guest will take an hour all on their own. There is always the opportunity for the audience to ask questions towards the end of each session; these range from the bog-standard ‘What was your favourite story’ to the much more obscure, occasionally attempting to plumb extraordinary depth from something quite banal.

Queuing for autographs can take up time and sometimes it means missing a panel. However, it is usually worth the effort to spend a minute or two chatting with the stars. The general rule at Dimensions is: two free autographs per person, although this sometimes drops down to one per person if schedules are tight. The queues seemed to go down faster than at the Swallow Hotel. Part of the problem with the latter venue was that long lines of people tended to stretch across the busy bar area and things could get a little disjointed.

There’s always a sinister collection of monsters walking around, including the Ood, a scarecrow and Clockwork men, not to mention a number of the audience dressed up as various Doctors and companions. 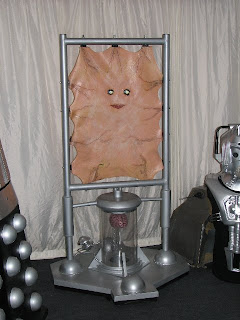 Organisers 1oth Planet (http://www.tenthplanet.co.uk/) have already announced that Dimensions 2008 will be back in North East England on 15th & 16th of next November. Put that date in your diary now! 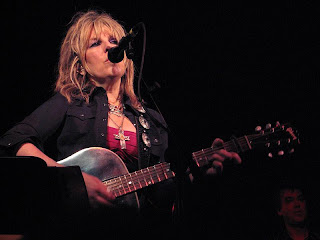 Lucinda Williams is one of the music world’s best-kept secrets. With her songs crossing the boundaries of rock, country and folk and dealing with subjects such as love, loss and longing, there’s little wonder that the throw away, ‘famous for five minutes’ (if that) scene has failed to detect her magnificence.
The current ‘West’ tour offered only three dates in England; two were in London but I went for the more Northern option of Sheffield.
It was ‘standing only’ at The Plug. The doors opened at seven but there was no support act and Lucinda and her band didn’t come on until 9.00 p.m. so it was quite a long standing wait. However, once they did take to the stage, the wait was quickly forgotten. I had a great view, with only about eight rows of people in front of me. Thus the show had a very intimate feel to it. 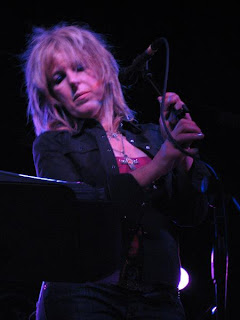 The intimacy was enhanced further by the opening selection of songs; hearfelt ballads including Lake Charles and Mama You Sweet although the tempo was raised soon enough. My favourites were Righteously, Those Three Days and Joy. The guitar work on the latter track just had to be seen - and heard - to be believed.
Lucinda kept changing her original set list when she sensed the mood of the audience and often started a song shouted out by a fan, following a quick, whispered word with each band member. I lost count of the number of different guitars Doug Pettibone used throughout the show but one thing is clear - he is a superb musician and deserves to be much better known. 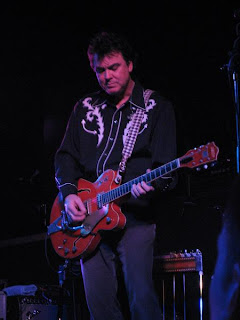 New songs (to me, at least) were Honey Bee and Jailhouse Tears (a duet with Doug). Both should appear on the next album. 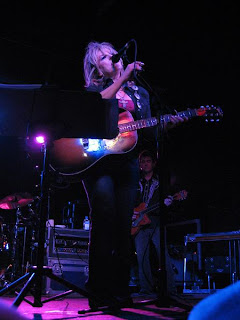 After a break of a couple of minutes they were back on stage for a fabulous encore of no less than five songs: Side Of The Road (a beautiful surprise) Essence, Come On, Unsuffer Me and, of course, West. Then the concert finally drew to a close at 11.30 p.m. It had been a fabulous, memorable night and it had more than lived up to expectations.
The only unfortunate thing about the evening was that it clashed with the critical England v Croatia football match I got back to the hotel (just five minutes’ walk from the venue - well planned!) and the first thing I did was check the CEEFAX for the England score. My brain struggled to take it all in…clearly there had been lots of goals but quite a few seemed to be against us! The horrible truth suddenly struck home. What a catastrophe - England beaten and out! And three long years till the next World Cup.
Looks like I definitely chose the right entertainment on that night!
Posted by Sean Marsh at 12:29