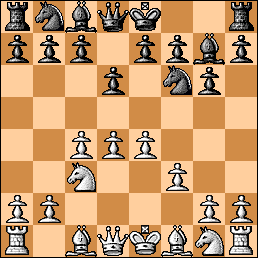 There are now two main ways for White to proceed. He can use the f3 pawn as a springboard for a Kingside attack (g4, h4 etc) or he can attempt a sort of blockade against Black’s standard attempts to break free from the shackles before deciding to push forward on the Queenside (a4, b4) or centre (f4, e5).

This new book starts with a short introduction followed by eight chapters, starting with 6 Be3 e5 (‘The Classical Samisch’) and moving through coverage of the Panno (6...Nc6), The Samisch Gambit (6...c5) and various other systems of play against 6 Be3 before concluding with lines leading from White’s trendy 6 Nge2 and 6 Bg5. 50 main illustrative games are used to demonstrate the various lines. However, only three are from the last two years and the bibliography is remarkably slight; only five books are listed and there is no mention of Chris Ward’s ‘The Controversial Saemisch’ (although a number of GM Ward’s games are quoted in this book).

The introduction takes a bit of a liberty by naming eight World Champions - Alekhine, Botvinnik, Tal, Petrosian, Spassky, Karpov, Kasparov and Kramnik - for whom the Saemisch ‘…has been a favourite’.

It’s certainly extremely optimistic to include Alekhine (who definitely favoured 3 g3) as one of the eight and Kasparov usually preferred other lines against The King’s Indian too. The back cover blurb does make an effort to amend the claim by putting into a more accurate context, omitting Alekhine’s name altogether and saying that the other seven ‘…have all utilized the Samisch at one time or another…’

Perhaps this could be seen as an over-critical comment but it is compounded by naming the Alekhine - Euwe game, the first illustrative snippet in the book, as match game number two from their 1926 match, when it fact it was game number three.
There are several highly controversial positions in the Samisch. One of the most famous features an extraordinary Queen sacrifice (?) 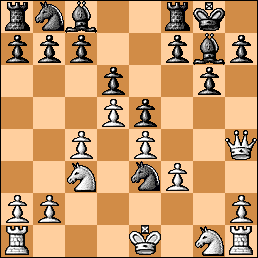 The featured game in the book focuses on 12 Ke2 but a note acknowledges that 12 Qf2 - freeing h4 for the advance of the White h-pawn - is probably stronger. Perhaps it would have been better to use a game with 12 Qf2 as the feature game and games with the technically weaker 12 Ke2 should have formed the basis of the branched notes.

It seems to me that this book falls somewhere in the gap between the ‘Starting Out’ series and something more detailed. As such, it will probably fall between two different target audiences too. It’s not that the material given is bad by any means; it just feels a little bland and uninspiring.

Train your brain with 1200 puzzles!

In the introduction, IM Palliser explains his desire to produce a book of chess puzzles for the ‘less experienced or even average club players’.

In some ways, it’s a difficult book to review; every time I started I got caught up trying to solve the puzzles! That’s exactly the effect such a book should have on the reader.

‘Spending as little as 10-15 minutes a day on one’s tactical ability really can reap dividends’ is an excellent point and this book should keep you going for quite a few days, if not weeks.

The 1200 puzzles are split across a number of chapters, namely:

1. Warming Up
2. Attack!
3. Opening Tricks and Traps
4. Skill in the Endgame
5. Loose Pieces and Overloading
6. Fiendish Calculation
7. Test Yourself
8. Solutions

Chapter seven is split into ten tests (indeed, the title of the chapter changes to ‘Ten Tests’ from that listed on the ‘contents’ page) with points awarded for successful calculation by the reader.
Readers from North East England will be happy to spot the names and games of several local yokels. For example… 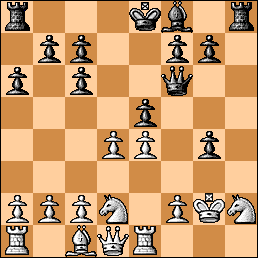 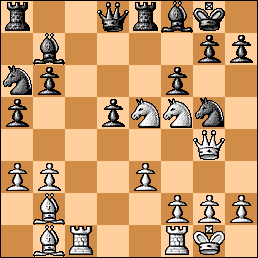 I always like to see examples of play from ‘real life people’ (if you know what I mean) and there’s a great freshness about this book’s selection of material.
Naturally, there are still plenty of positions from top-level Grandmasters and World Champions but not all end the way form would suggest… 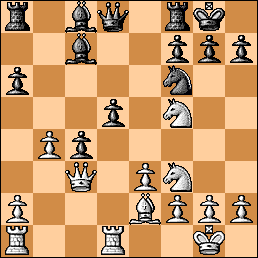 You don’t need the solutions to these samples - go ahead and try them yourself. Then go and buy the book for the other 1,197 puzzles.

* Got to knock a point off here though; ‘Guisborough’ is the correct for the town and chess club (although Lord and Lady G. retain the older spelling)