Unfortunately, illness meant a disappointed Matt Jackman had to withdraw before play began, but four players were still enough to produce an excellent set of tough battles and totally uncompromising chess - just the way Mike always liked it to be.

In fact we were able to play a double-round robin with 20 minutes on each clock rather then the 10 we originally intended. The extra thinking time certainly came in useful as the games were all very complicated.

We reduced the number of set openings too, but they were still variations of the Sicilian Defence, which was one of Mike's great favourites throughout his chess years.

The players chose a Poldark-themed photograph to determine the order of play. I was hoping they would leave Demelza for me, but I was left with George Warleggan instead.

With food at the ready, it was time for battle to commence. 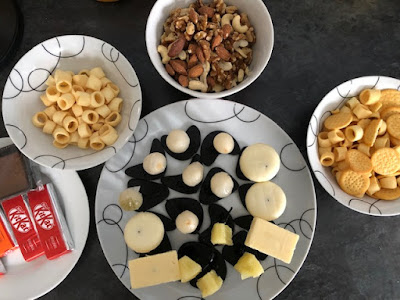 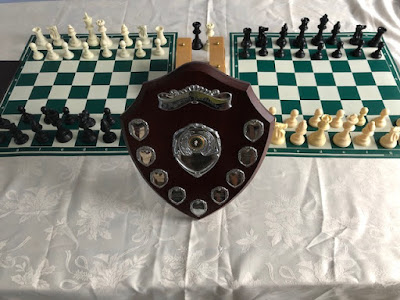 The opening round featured the Najdorf Variation of the Sicilian Defence.

Something strange happened at the start of the first games. The back door unexpectedly blew open, as if Mike himself had arrived to observe the games

David and I both played the Sozin Attack with White; a real blast from the past - Fischer's favourite weapon against his own favourite defence.

My second game against Richard saw me end up worse towards the end but he eventually lost on time.

Royce sacrificed a piece in the second game against David and for a while it didn't look like there was enough compensation, but things swung back in Royce's favour when both players were very short of time on the clock.

This time it was the Scheveningen Variation.

Royce came out fighting with the Keres Attack (6 g4) and even though he lost two pawns there was definitely compensation due to his very strong knight, which was very difficult to challenge. Black's extra material did eventually tell, but it was not an easy game. I played the Sozin Attack again in the second game and the complications favoured White from early on.

Meanwhile, David and Richard had two great battles, the second of which seemed to go on forever before Richard unfortunately ran out of time again.

The final round brought the Accelerated Fianchetto Variation into play.

Richard won his first game against Royce with a very nice checkmate, after both sides had spent some time attacking with queens and rooks. The second game looked good for Richard too, but Royce played very resourcefully in the endgame to create enough counterplay to make the first and only draw of the tournament - in the very last game to finish.

My first game with David saw my excellent opponent create a typical space advantage, which was only broken when a key pawn dropped off, after which the tactics were in Black's favour. David made an uncharacteristic early error in the second game which brought about a defeat.

I was very pleased to be able to spend a day in the company of such genuine gentlemen. I am sure we all learned a great deal playing the openings with which we were all unfamiliar.

There was still time for the traditional post-tournament meal, which was enjoyed by all concerned. 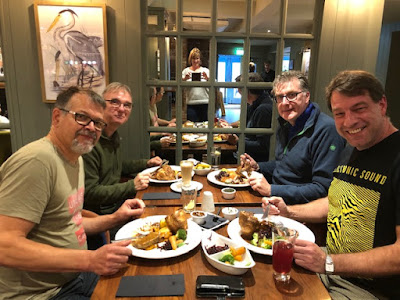 The 11th Mike Closs Memorial Tournament will happen some time during 2020.