Rob Heron and the Tea Pad Orchestra: Money Isn't Everything 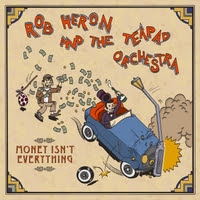 Money Isn't Everything
Rob Heron and the Tea Pad Orchestra

According to their website notes, ''Rob Heron and The Tea Pad Orchestra play an eclectic and original musical brew of 1930’s swing, gypsy jazz, hokum blues, cajun, and country, all with similar themes of debauchery, dandyism, disasters and drink.''

Indeed, it seems the swing era of 1930s is coming back with a vengeance.

In recent times I have reviewed CDs and shows by Meschiya Lake and The Little Bighorns, The Wiyos and the Two Man Gentleman Band and all three are, to some extent, proponents of the genre. Rob Heron and the Tea Pad Orchestra inhabit a similar world.

Musical influences aren't the only roots showing;  the group's Newcastle heritage is apparent in the track list, with the Great Fire of Byker (about a fire in a scrapyard in June 2011) enjoying a name-check.

The songs were all written by Rob and the Orchestra apart from Danse de la Lemonade (Leroy Broussard, translated by Rob Heron), Bairro Alto (Rob Heron/Sofia De Castro) and Bank Failures (Bob Miller). The latter, with its obvious subject matter, is particularly interesting, as it is a very old hillbilly-style song which is just as apt today as the day it was written.


The songs are generally up-tempo toe-tappers. Musically, the whole album is a treat to the ears. Alongside the expected guitars, drums, double bass and harmonica, we find a mandolin, accordion, cornet piano, washboard and even a Sousaphone.

The stand out tracks are Money Isn't Everything, Hot Bath and She Don't Like Fish, all of which display the quirky side of the artistes compositions merging very well with their accomplished musicianship.

Rob Heron and the Tea Pad Orchestra have only been together since 2010. It will be interesting to follow their progress, because on this sort of form they are surely going to become much better known before too long.

For further details pop along to their official website and keep up to date with their tour dates over at the Brookfield Knights site.
Posted by Sean Marsh at 15:07