Time to catch up with some recent chess releases. This time, I will provide a brief overview but longer reviews of some products will follow in a well known chess magazine. 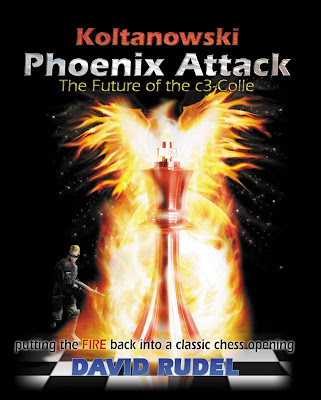 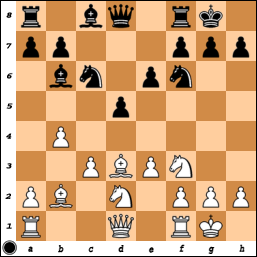 He promised to return to the subject, and he was as good as his word. This new book is an in-depth study of the Koltanowski-Phoenix Attack. The author has identified a problem for White in the traditional method of play. In this key position… 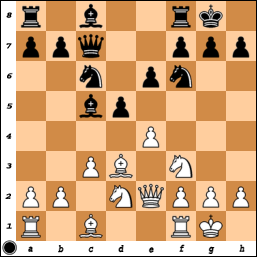 …Black has a high-class waiting move in 10 …h6. It doesn’t look like much, but it throws a spanner in the works.
White is hoping for one of two things in this variation of the Colle: pushing e4-e5 or isolating the d-pawn with a timely exd5. Yet neither can occur without Black’s cooperation and with 10 …h6 the second player steadfastly refuses to be compliant with moves such as 10 …Bd6 or 10 …Ng4.
The upshot is that White may struggle to find a meaningful move. For example, 11 Re1, trying to push e4-e5, is met by the annoying 11 …Ng4 and the waiting move 11 h3 is frustrated by 11 …Nh5, when the weakness on g3 is apparent. This is the argument which gave rise to the creation of the Phoenix Attack.
The material is presented in five main parts:
First Things First
A Simple Mini-Repertoire (SmR) for the Phoenix
Additional Weapons
Reference Analysis
Practice
After taking the reader through the analysis, goals and nuances of this intriguing new plan, the author finishes off with a substantial number of test positions to enable students to see how much of the material has been absorbed.
As a former Colle player, I'd be happy to try these new avenues over the board.
It's a well-written book with an impressive amount of space devoted to prose explanations.
For further details, head for new Koltanowski Phoenix Attack website. 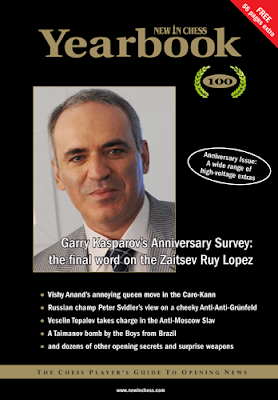 Yearbook 100
New in Chess
Congratulation to New in Chess on reaching such an impressive milestone. 100 Yearbooks! There is a celebratory tone to the volume, yet they keep an optimistic eye on the future
‘Already the 100th Yearbook? We prefer to say that this is ‘only’ issue 100, as we don’t intend to stop here.’
One of the many highlights of this bumper volume (it has an extra 56 pages) is a special survey by Garry Kasparov on the Zaitsev Variation of the Ruy Lopez, which is 13 pages long. It brings many memories of the ear in which Kasparov and Karpov used to head for this position: 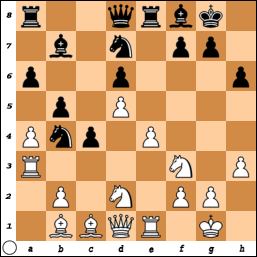 Needless to say, the opening surveys are of a very high standard, as always. This time the authors include Anand, Ivanchuk, Adorjan, Vaisser, Kuzmin, Van der Wiel, Palliser...
There is also a (tough!) prize Anniversary Quiz (deadline: 1/1/2012) and various anniversary columns, including Glenn Flear's personal list of the best opening books he's reviewed over the last 10 years.
There's nothing quite like a New in Chess Yearbook. Every volume contains something of interest, regardless of one's repertoire.
Here's to the next 100 volumes. Probably, Kasparov will still somehow find time to write something special and I'll still be reviewing... 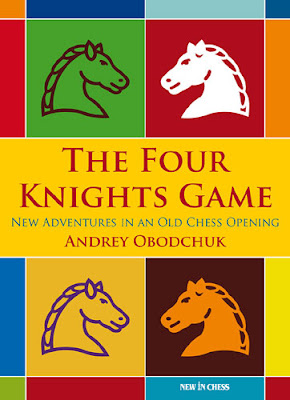 The Four Knights Game
By IM Andrey Obodchuk
238 pages
New in Chess
The Four Knights has suffered from a dull reputation for many years. This can be due to the eternal popularity of the Ruy Lopez and a natural desire for junior players to move away from their early years of simply brining out their pieces and ending up with a symmetrical game every time.
This book aims to bring some of the freshness back to the old way of playing, offering ‘A New Repertoire in an Old Chess Opening’.
Contents:
The Three Knights’ Opening
The Four Knights
Black avoids the main line on move 4
The Symmetrical Variation 1 e4 e5 2 Nf3 Nc6 3 Nc3 Nf6 4 Bb5 Bb4
The Metger System
The Rubinstein System
5 Bc4 in the Rubinstein
The Belgrade Gambit
One advantage of trying this old opening is that your opponent may not be familiar with the most accurate responses. That was certainly the case in the game Short – L’Ami (Wijk aan Zee 2009) when after 1 e4 e5 2 Nf3 Nf6 3 Nc3 Nc6 3 Bb5 Nd4 5 Nxe5, Black immediately committed an inaccuracy with 5 …Nxb5?! (5 …Qe7! Leads to equality, according to this book). Short won in just 19 moves.
Frankly, Black remains in good shape, theoretically speaking. It’s not easy for White to make any impression the ‘creative’ Belgrade Gambit and in the main lines he is fine too, if he knows what he is doing. The Metger System has not changed much at all over the last 80 years or so and remains fully viable for Black.
The author has most fun in chapter 6, ‘5 Bc4 in the Rubinstein’.
. 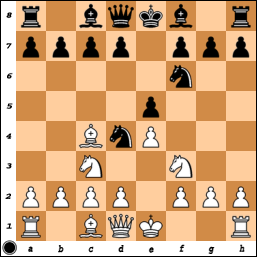 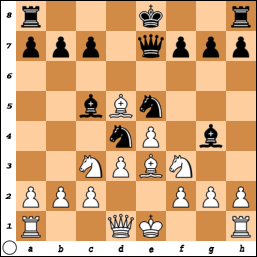 White played the surprising 11 Nxd4!? Here, allowing 11 …Bxd1 and then followed up with the very complicated 12 Nf5. This leads to 14 pages of complicated analysis.
The author is honest about the merits of his subject:
‘Does the Four Knights give White real chances to fight for the advantage? No, of course not! But it does guarantee a lot of adventures, and adrenaline rushes, especially if both sides are disposed to a sharp fight!’

The Ruy Lopez
Move by Move
By GM Neil McDonald
317 pages
Everyman
GM McDonald provides lucid explanations and pertinent examples to present a high quality guide to one of the most popular of all chess openings. There’s always plenty of prose in the books of GM McDonald. He never leads readers into a forest of analysis and just leaves them there. I like the way he takes the time and space to explain things properly, even in very familiar positions. 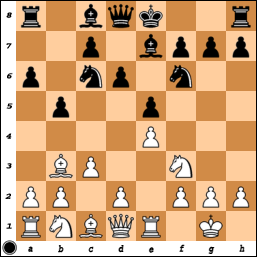 ‘No other mainline opening exposes the black pawns to such long-term attack. Black is buying a safe and full development, and restraining the power of the white pieces, at the cost of a couple of static blemishes in his structure.’
Contents:
White Plays d2-d3
White Plays d2-d4
Black Plays …Bc5
White’s e5 Pawn Centre
Gambit Lines
The first 60 pages are sensibly spent giving the reader ‘A plan to get you started with the Ruy Lopez’. This involves playing d2-d3 at a very early stage, rather than following the main lines (c2-c3 followed by d2-d4).
This ensures that readers can start playing the Ruy Lopez with the minimum amount of preparation. The positions may not be as potent or testing as the main lines but White will have a clear plan to follow.
After that, it’s straight into a voyage through the main lines, encompassing journeys through the well-travelled lands of the likes of the Chigorin, Breyer and Zaitsev systems.
The book does not pretend to supply an encyclopaedic coverage of the Ruy Lopez (for example, the Exchange Variation is mentioned only in passing) and there are no refutations of Black’s established stalwarts (the author prefers Ant-Marshall lines to accepting the gambit) but it is very strong on no-nonsense explanations, presented in terms club players can easily understand.
I wasn’t totally convinced by the previous book in this series (on The Slav), but GM McDonald has provided a template others would be well advised to follow.

Beating Unusual Chess Defences: 1 e4
By IM Andrew Greet
304 pages
Everyman
Playing the Ruy Lopez is one thing, but to use 1 e4 in serious games requires knowledge of numerous other openings. This new book should help readers deal with some of Black’s other responses.
IM Greet covers…
Scandinavian Defence
Modern Defence
Pirc Defence
Philidor and Czech Pirc
Alekhine’s Defence
Other Defences
‘My approach has been to meet each of these openings in a principled manner, choosing well-established main lines for White. Generally we will be looking to seize space in the centre and pursue the initiative in whichever way best meets the demands of the position.’
To this end, he analyses: 3 Nf3 against the Scandinavian (whether Black plays 2 …Qxd5 or 2 …Nxd5) with the basic plan of castling quickly and gaining space with c2-c4 An early f2-f4 against the Czech Pirc, Modern and Pirc (heading for an Austrian Attack) and some of the Philidor lines.
Against 1 e4 d6 2 d4 Nf6 3 Nc3 e5 (which some of us prefer to call The Lion) he likes 4 dxe5 dxe5 5 Qxd8+ Kxd8 6 6 Bg5 and on 6 …Be6 he continues with 7 g3!? (‘This venomous and slightly unusual move offers White good prospects.’)
Alekhine’s Defence is met classically by 1 e4 Nf6 2 e5 Nd5 3 d4 d6 4 Nf3. ‘Other Defences’ refers to 1 …Nc6, 1 …b6, 1 …a6, 1 …g5 and 1 e4 g6 2 d4 Nf6. Most of the illustrative games are taken from 2000 up to 2011, with just one or two examples from the 1990s.

Chess Secrets: Giants of Innovation
By IM Craig Pritchett
288 pages
Everyman Chess
The giants in question are Steinitz, Lasker, Botvinnik, Korchnoi and Ivanchuk. Each of them is given a chapter all to himself. Essentially, the format is a series of well annotated games for each hero, interspersed with biographical snippets and a few pertinent quotes.
The criteria for a player to be classed as a 'giant of innovation' is explained thus:
'...innovation is about much more than just coming up with new opening moves. It certainly includes the discovery of new stratagems and tactical motifs as well as the development of whole new game plans.'
It's interesting to see the development of the opening phase through the journey from Steinitz to Ivanchuk. In 1866 we Steinitz and Anderssen giving it their all and trading blows in a wild King’s Gambit, where theory was being created virtually as they went along. By the end of the book, Ivanchuk is playing a new move on his 12th turn against Beliavsky's Caro-Kann and giving the latter no chance of recovery.
Of course, some of the games will be very familiar to readers, such as Lasker’s famous win against Capablanca in an Exchange Spanish at St. Petersburg in 1914, but others are less well known.
It's good to see one of the big Reshevsky v Botvinnik clashes getting an airing. It shows Botvinnik using a system rather than just an opening; something which became a very valuable part of his chess armoury. 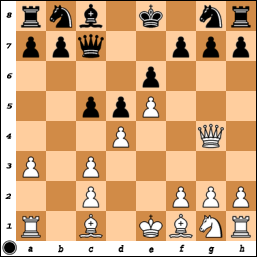 Reshevsky - Botvinnik
World Championship Tournament, 1948
Botvinnik decided against giving up his Kingside pawns with 7 ...Ne7 and played instead the unusual (for the time) 7 ...f5, leading to a different sort of game. Black went on to win.
'The American, Samuel Reshevsky, felt the full force of Botvinnik’s mature powers at the 1948 Championship, losing 1.5-3.5 to him in their individual games.’ The score may be the all-important factor, but the mini-match between the two players was extremely close and Reshevsky certainly had his share of opportunities.
With a bibliography spanning the years from 1847 up to 2010, the depth of research is evident. This is one of the better volumes in Everyman's 'Giants...' series.
Posted by Sean Marsh at 14:39