Bill Wyman and The Rhythm Kings 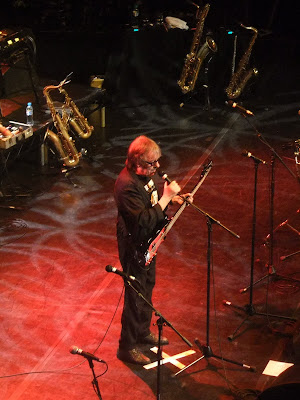 Bill Wyman and The Rhythm Kings
The Sage, Gateshead
29.10.2011
Nearly four years after I last saw them, The Rhythm Kings were back in the North East. Two hours of high-class musical entertainment followed...
The show started promptly at 7.30 p.m. There was no support act. Bill Wyman was the first person to arrive on the stage and was greeted by a call of 'Happy Birthday!' from a member of the audience (he had turned 75 five days before the concert).
Bill explained the ethos of The Rhythm Kings: ‘We do a mixture of music, we play some Jazz, Blues, Soul, Rock and Roll Music..and we just have fun, that’s why it’s all about, that’s why we’re here...so have fun with us and it’ll be a great night.’
Then he introduced the band, one by one, until the stage was packed with personnel. 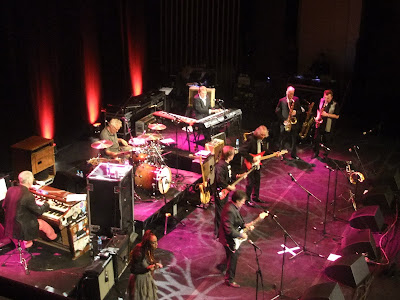 Seven of the nine were to take a turn as lead vocalist before the even was through. The first few songs all featured different singers. 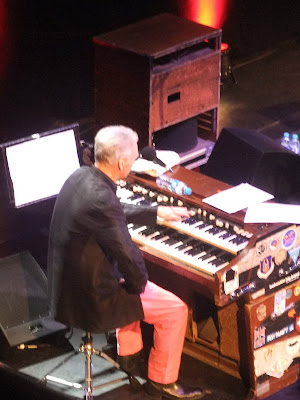 Georgie Fame sang on ‘Good To Me’ and this was swiftly followed by:
Albert Lee - ‘Jitterbug Boogie’... 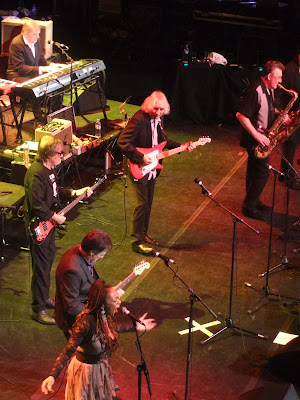 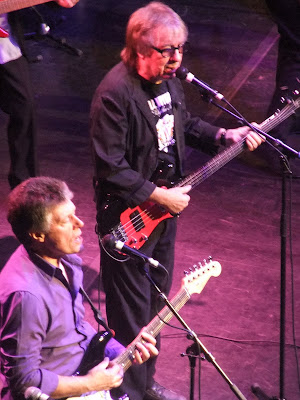 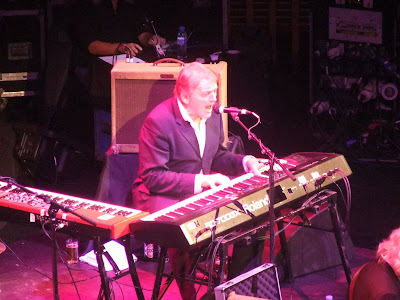 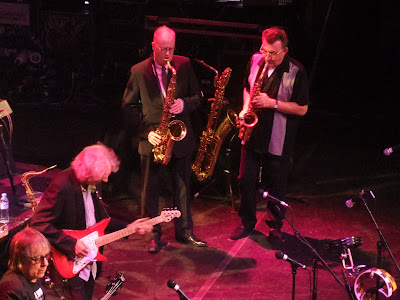 Then it was back to Georgie for ‘Three Cool Cats’, featuring some fine saxophone interplay from Nick Payne and Frank Mead. 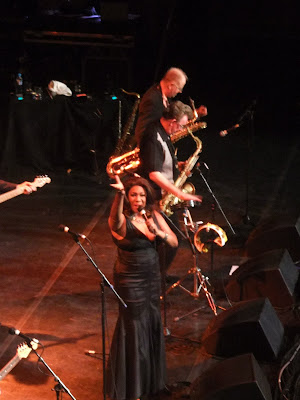 Then a special guest was announced - Mary Wilson, original member of The Supremes, who sang the classics ‘Baby Love’ and ‘Stop In The Name Of Love’, followed by a duet with Georgie on 'Stormy Weather'.
Mary left the stage with a promise to return in the second half. Four more songs followed before the interval, namely 'Mule Skinner Blues' (Albert on vocals), 'I'll Be Satisfied' (Beverley), ‘It’s Raining’ (Geraint) and then Bill at last took a turn, on one of Chuck Berry's ‘Never Can Tell’. 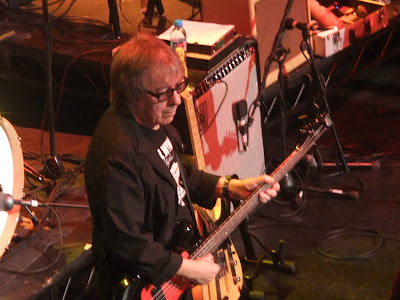 After the first hour, there was a 20-minute interval. 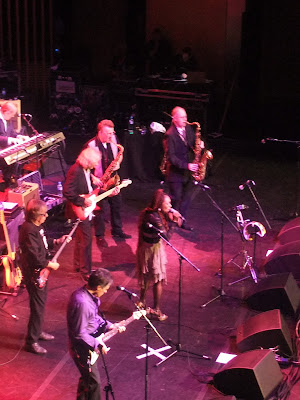 The second half started with Beverley on a slow-burning 'This Is A Man’s World'.
Geraint was next up with '300 Pounds Of Heavenly Joy' . He prefaced it with an in-joke at Bill's expense: ‘Some of you, or course, might be still working in stones...’ 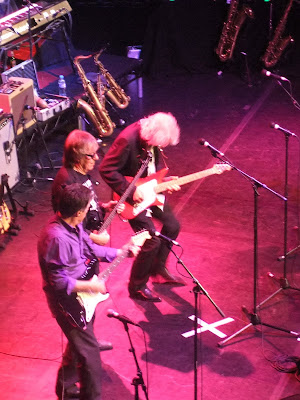 Albert Lee was then unleashed again to pick up the pace on 'Race With The Devil', followed by Georgie Fame announcing ‘...the oldest song in the programme tonight - suggested by Bill Wyman...’ which turned out to be ‘Just For A Thrill’.
Back to Beverley for ‘I Just Want To Make Love To You’ and then Frank Mead stepped forward to blast our a stirring 'Sugar Bell'. 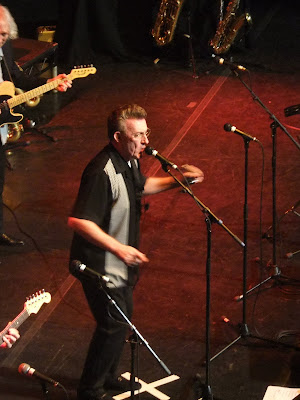 Frank was on great form on the harmonica between verses too. 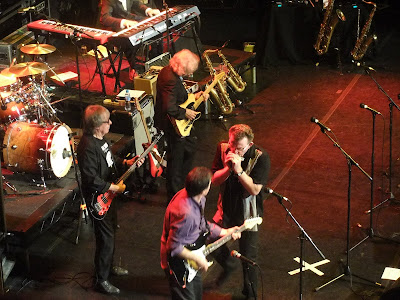 Just two of the band didn't get an opportunity to take the lead vocals. One was Nick Payne... 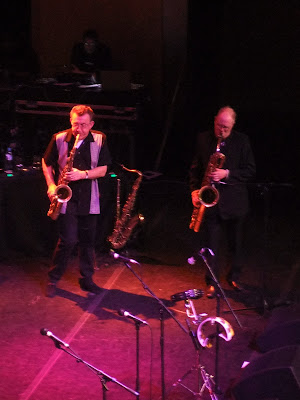 ...and the other was drummer Graham Broad (although both helped out on the backing vocals from time to time). 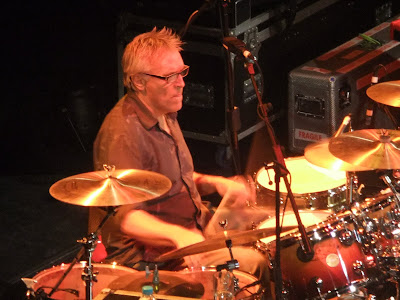 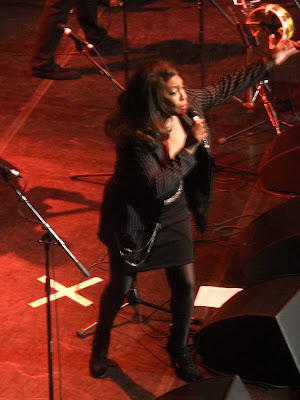 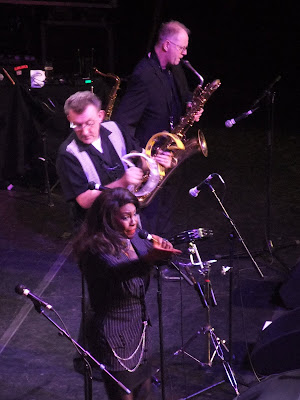 Then, after 'That Is Rock And Roll', Frank's tapping on the cowbell heralded 'Honky Tonk Women', sung by Bill, after which the second half of the show drew to a close (although there was still the encore to come, of course). 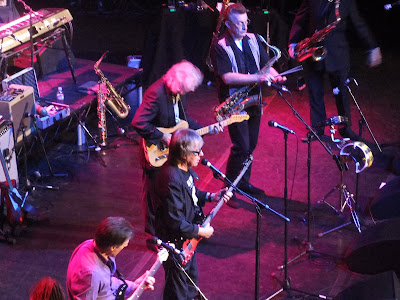 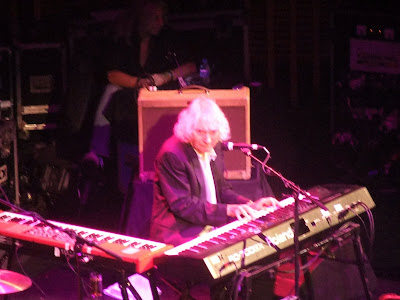 Albert took to the keyboards and shared duet vocals with Beverley on 'So Sad' accompanied only by Terry Taylor on guitar, before the rest of the band re-emerged. 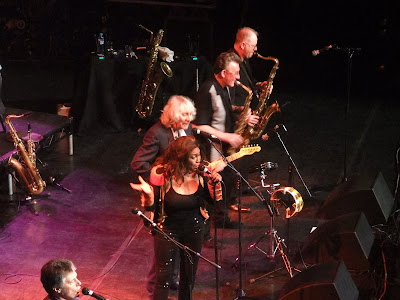 This included Mary Wilson, who finished the show with a terrific 'Dancing In The Street'. 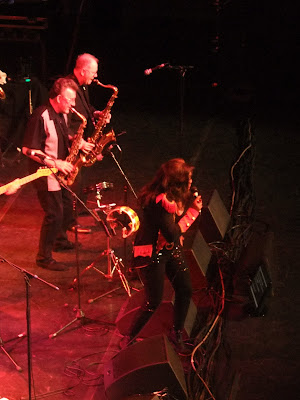 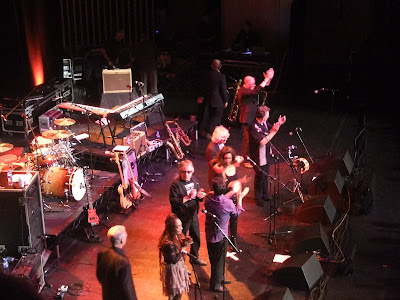 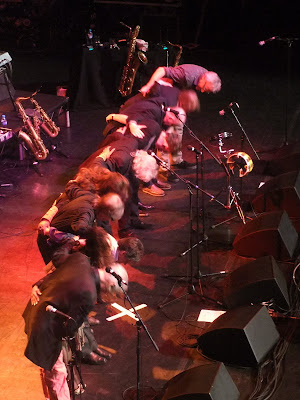 The final bow...but hopefully The Rhythm Kings will return soon.
Posted by Sean Marsh at 04:30