There will be new chess reviews here all of this week, with at least three more articles planned to arrive over the course of the next few days, so stay tuned... 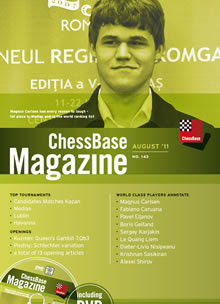 The latest issue of ChessBase Magazine easily maintains the usual high standards set by this series.

As always, Rainer Knaak's editorial in the printed section of the magazine is well worth a read. This time he dwells on the Candidates matches and makes several interesting points. Firstly, he brings to the reader's attention that when the World Championship match is played next year, it will finally bring an end to the cycle which started three years ago. 2008-2012 is indeed a long time; so long, in fact, that I'm sure most readers will have completely forgotten when and how this cycle actually started.

The challenger for Anand's title will, of course, be Gelfand. At 43, it is a surprise to many that he triumphed over much younger players but as Knaak observes, '...when you get down to it, the older ones are hard to beat.'

Carslen, the most notable absentee from Kazan, regained his number 1 spot in the World Rankings with his victory in the King's Tournament. Yet the highlight of the DVD must surely be the splendid coverage of the Candidates matches. Mihail Marin contributes an in-depth survey of the openings used by the Candidates and Karsten Mueller is on hand to analyse several endgames with his customary scrutiny.

Naturally, all of the games are given and most have have serious annotations. It's interesting to see that despite the extremely high level of preparation and the depth of their experiences, the best players in the world can still make seemingly trivial mistakes which prove very costly. The notes to the games point out several such cases and here are two examples. 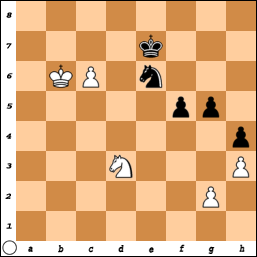 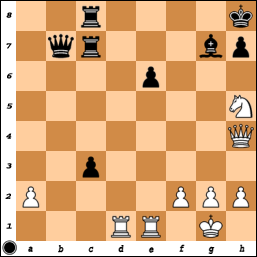 This is just one critical position from a particularly nervy game. Grischuk played the incorrect 30 ...Rg8? It looks like a move from someone who enjoys playing a little bit too much blitz chess. Perhaps Black has hopes of a checkmate on g2...? However, Kramnik could have gained a very large advantage with the fairly obvious 31 Nf4! but instead he tried 31 Rd8 and the game was drawn after further errors.

Showing these examples is not an exercise is being overly critical of top players, but rather to highlight that a combination of tiredness, time trouble and tension can take its toll on players of all strengths, from World Champions to club players.

There was plenty of impressive chess on display in Kazan too, including the classic pawn roller by Gelfand. 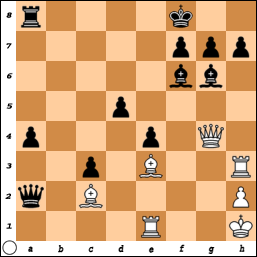 Gelfand, who provides the notes to this encounter, has just captured another pawn with 36 ...Qxa2. That's a lot of pawns in the bag for one Rook and White couldn't cope; he lost on time after four more moves.

There is also an excellent two-part interview with Kramnik (audio only) in which the former World Champion talks frankly about his missed chances against Grischuk (amongst other things).

The opening surveys presented on the DVD in standard format are:

There are four opening presentations in the Fritz Trainer format:

The usual regular features are all present and correct, including the popular 'Tactics' feature by Oliver Reeh. Here's one for you to try. 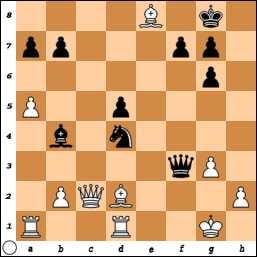 Black's last move, 25 ...Nxd4, threatens both the White Queen and the King. Yet it is White who can force a win from here. Can you spot the only move to ensure that this is the case?

As always, ChessBase Magazine is highly recommended to all.
Posted by Sean Marsh at 04:00