The book starts with an interesting Foreword by IM Georgios Makropoulos (Fide Deputy President and President of the Greek Chess Federation), which tells how the work came into being.

This is followed by an Introduction by Sotiris Logothetis, in which of J.R. Capablanca’s advice - study endgames - is reiterated.

The book you are holding aims to arm you as well as possible for this stage of the game.

Chapter one contains two pages highlighting ‘The Golden Rules of the Endgame’ (originally recorded by endgame specialists Rueben Fine and Pal Benko) arm and prepare the reader for the study material to come.

The King is a strong piece. Use it!

Passed pawns should be advanced as quickly as possible

Then it’s on to the meat of the book and the main contents of the 320 pages.

The material is presented in five section, namely:

There is, typically, one endgame position per page. Each example starts with a small prose assessment of the state of play followed by the remaining moves, fully annotated.
I found the assessments to be particularly noteworthy.

For example, chapter 29 looks at Rook v Minor Pieces endings and these are often neglected in books. It can be difficult to summarise the basic themes as the material imbalance can make things quite murky.

According to the basic material evaluation scale, two minor pieces are equal to a rook and a pawn. However, in this type of ending the respective pawn structures, the initiative ands the collaboration between the pieces are of primary importance. When the pawns on the side with the rook are weak or fixed, then the minor pieces can easily attack them and thus hold the upper hand. Otherwise, the rook is able to hold the balance and if the side with the rook possesses a passed pawn, the advantage usually passes to this side. Finally, we should note that a bare ending without pawns is, of course, drawn.

I did notice a couple of surprising omissions. Drawing possibilities with King and Knight v King, Rook and pawn are discussed but the most famous practical example is absent, as far as I can see. 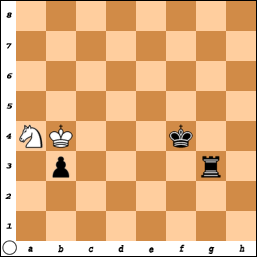 White drew by holding position, with the Knight oscillating between b2 and a4.

With pawns for both sides, the general advice given here is:

The closer the pawn is to the edge of the board, the easier the win is for the side with the rook! This exception, in comparison with other types of endings, is characteristic of the downside of the Knight.

The best demonstration I have seen of the theme is undoubtedly this cute finish: 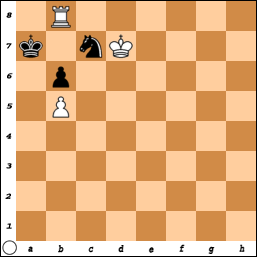 
A good way to get the most out of the material would be to set up the positions and play them against Fritz or even a human sparring partner.

This is an impressive book and an ideal companion volume to Practical Endgame Play - Beyond the Basics (see my archive for the review). More experienced players shouldn’t be put off by the word ‘basics’ in the title either; there is plenty of challenging material here for the club and tournament player.

The first edition of this book, published by Batsford way back in 1995, created a very favourable impression. The second edition, running to just under 290 pages, contains a substantial amount of new material. GM Levitt explains in the new preface why it seemed best to update the original volume rather than create a sequel.

Part One: Background and Context (listed in the book as Black Part One but that us surely an editorial mishap)
Introduction

Part Two: The Elements of Chess Beauty
Paradox
Depth
Geometry
Flow
Part Three: Sampling the Spectacular
The Poetry of War: The Aesthetics of Practical Play
Tactical Fantasies: The Charm of Studies
Art for Art’s Sake: The Delight of Chess Problems
The Weird and the Wonderful: Unorthodox Problems
Further Considerations on Chess Aesthetics
Solutions to Exercises

The elements of chess beauty are identified as Paradox, Depth, Geometry and Flow and the relevant chapters provide lots of evidence to fit the theory.

The authors present an outstanding amount of examples representing the beautiful side of chess. Of course, beauty remains in the eye of the beholder but this book strikes gold with it’s extraordinary collection of real-life games, problems and studies. The crossover of the two genres is very difficult to master; it’s one of the curious boundaries in chess that very few seem willing to cross.

I’m sure that most chess players are more likely to be attracted to studies that are quite ‘lifelike’, such as this one: 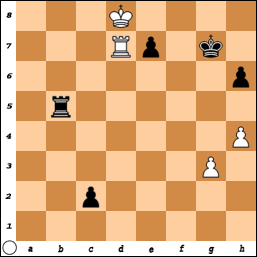 The book will give you a full explanation of all the twists and turns; I shall just give the moves so you can judge for yourselves if this sort of study appeals to you. If it does, then you’ll enjoy the plethora presented throughout the book. 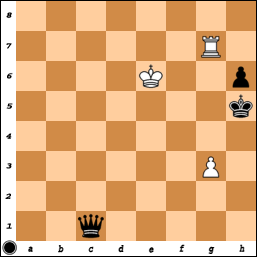 …with a drawing fortress that cannot be breached.

There are two ways to approach this book. One could read it slowly, from cover to cover, and assimilate the full amount of material on offer or one could use it as one of the best-ever ‘dipping in’ books. Virtually every page features extraordinary examples of spectacular chess, guaranteed to amuse, amaze and entertain.

Here’s three randomly selected examples of what to expect… 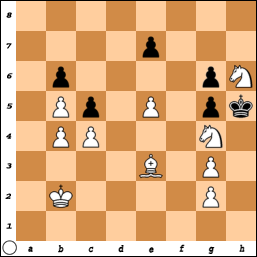 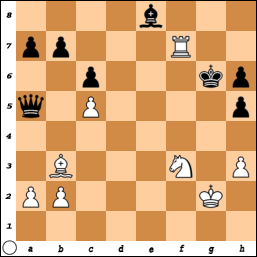 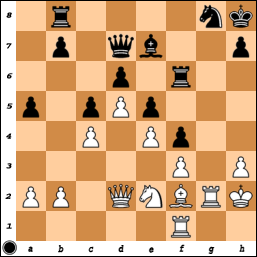 This a famous position. Kotov lit the blue touch paper and went on to win brilliantly after 30...Qxh3+!!

There are examples such as these throughout the book. It’s a real treasure trove of some of the finest gems, jewels and trinkets from all corners of the chess universe.

The new material for the second edition includes:

A new foreword by GM Levitt
An extended Introduction
Numerous additions to various chapters (including a full analysis of the classic Kasparov - Topalov clash from Wijk aan Zee 1999)
Chapter 10 is completely new and considers feedback from the first edition plus a look at ‘helpmates’ and other weird and wonderful items.

No self-respecting book on spectacular chess would be complete without this oft-quoted snippet (thus far my greatest claim to chess infamy): 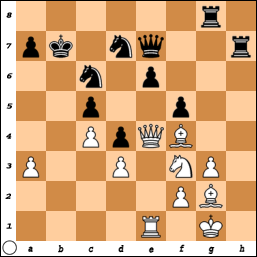 Norwood - Marsh
Walsall 1992
White to play and finish off in style!

Even if you own the original, this new edition is well worth a place in your collection.

I enjoyed the previous works by IM Greet (see archive for my review) so I was looking forward to his coverage of the Accelerated Dragon.

The first thing to notice is the page count; at 320 pages it’s surely the biggest (so far) of the ‘Starting Out’ range.

A short history of the opening is followed a summary of the author’s experiences with Accelerated Dragon and a basic overview. Important differences between this and the ‘normal’ Dragon are briefly discussed also.

The first chapter covers the Hyper-Accelerated Dragon (1 e4 c5 2 Nf3 Nc6 3 d4 Bg7!?) and then the rest of the book analyses Classical lines (one chapter), Yugoslav Variations (two chapters) early Nxc6 by White (one chapter) and then five chapters on the very important and popular Maroczy Bind.

The Accelerated Dragon played a part in my own repertoire back in the 1980s. Mike Closs and I did some work on it together using David Levy’s book as a guide, having moved on a bit from the standard Dragons. Mike kept it in his repertoire whereas I moved back to the French following a couple of losses (and frustration at rarely getting main line Sicilians over the board - the 1980s were rife with anti-Sicilians systems until people started following John Nunn’s lines from ‘Beating the Sicilian‘.) So it was with the company of a few burning embers of former knowledge and experience that I approached this new book.

The differences between this and the Dragon are best demonstrated by a line in the Yugoslav chapters. 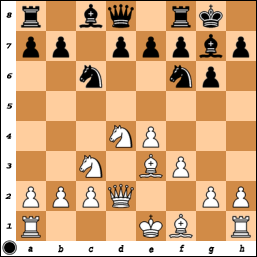 In this position, Black has played a good developing move instead of the standard Dragon …d7-d6. This gives the significant option of playing …d5 in one go.

To gain an extra tempo after only eight moves is quite an achievement under any circumstances. When we are dealing with a sharp, tactical variation involving opposite-sided castling, the importance of every move increases enormously.

In fact there are several such move-order tricks adopted by Black and it’s very easy to imagine club players being unaware of the nuances as they blithely head for what they think is a transposition to normal Dragon lines.

One of the suggested lines against the Maroczy Bind features the remarkable plan dreamed up by the great free thinker Bent Larsen. 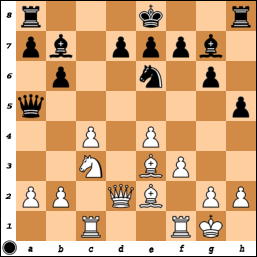 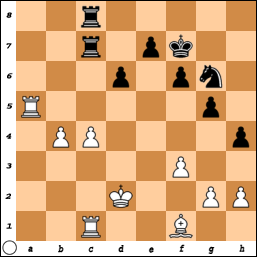 It’s an intriguing and attractive way of playing, but it does come with a health warning and this book reveals a strong-looking White counter.

It is quite possible to get into Accelerated Dragon lines via other openings, such as the English Opening. A list of common transpositions wouldn’t have been out of place in a Starting Out book but with 320 packed pages a lack pf space could be the reason that one wasn’t included.

There are a couple of things that could have been tighter, editorially speaking. On more than one occasion the reader is referred to a diagram on a different page (and not just the facing page either). The sheer amount of material probably led to some diagrams being doubled up to preserve space. There’s a bit of repetition on page 80 when the author relates the tale of how he ‘…suffered a swift, painful and humiliating defeat’; the very next sentence tells how he ‘…went on to suffer a quick and humiliating defeat’.

All in all, IM Greet has done a very thorough job and this book can be readily recommended to all readers interested in getting to grips with this interesting opening. I’m sure that those who already have the Accelerated Dragon in their repertoire will find plenty of interesting material too.

The strategies, themes and traps are all very well explained and just as in other volumes in the ‘Starting Out’ series, the book is replete with ‘Tips’ ‘Warnings’ and other valuable general advice.

For further details of these and other Everyman products, please visit: http://www.everymanchess.com/