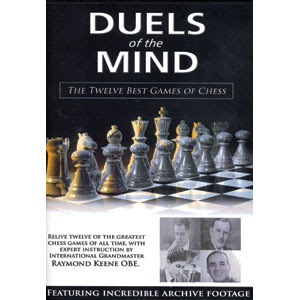 It’s hard to believe now, but there was a time when we had regular chess shows on British TV. ‘The Master Game’ brought chess into the living rooms of the country just as ‘Pot Black’ did for snooker. We were also treated to a weekly round-up of World Championship action. Things reached an absolute peak in 1993 when Short played Kasparov for The Times World Championship. Chess was on two channels, with Channel 4 showing various stages of each game live throughout the day.

The explosion of satellite channels should have held lots of promise for (at the very least) a niche home for chess programmes old and new. And yet….somehow the trail went cold and chess vanished from our screens altogether.

A particular highlight of the Golden Era was the ‘Duels of the Mind’ series, as shown on Thames TV towards the end of the 1980s (but other ITV regions had to do without). Presented by influential Grandmaster Ray Keene (OBE), the 12 half-hour shows featured one classic game per week, all the way from 1851 to 1985.

Fortunately for us all, the whole set has just been released on DVD and is now available as a four-disc set.

The history of our favourite game has always fascinated me but I know that in our ultra-fast, quick-fix world the wonderful heritage is in danger of being neglected. Many players simply won’t pay any attention to games that have no interest as far as their own repertoires are concerned. Amazing as it seems, I believe a lot of the games featured in this set will be new to a high percentage of viewers.

GM Keene is the ideal guide for this 12-part journey through history. His chess credentials are second to none and his measured, controlled delivery has been away from our screens for too long. The late Donald Woods (former newspaper editor and chess enthusiast) asks typical club-player questions throughout each game; Ray’s answers are always informative and to the point.
A couple of positions from these terrific games should whet the appetite. 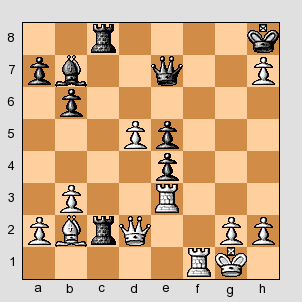 Zukertort - Blackburne
What would you play for White? 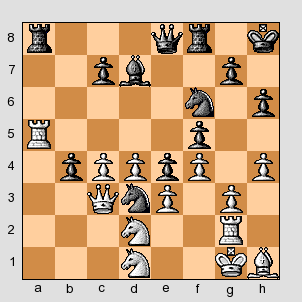 Bogoljubow - Alekhine
How did Alekhine respond to 30 Rxa8 ?

I have used the companion book to the series many times in chess lessons with juniors and I can readily conform that the chosen games are of exceptional interest.
I recommend these DVDs highly and live in hope that some day, somehow, more TV chess shows of old will find their way onto shiny new DVDs (especially a complete run of The Master Game!).
For further details of Impala books and DVDs, please visit:
http://www.impalapublications.com/
Two excellent suppliers of Impala DVDs are:
http://www.bcmchess.co.uk/
http://www.chesscenter.com/
Chess is by no means the only subject covered by Impala; they have, for example, an autobiography of Kaiser Wilhelm II and some very interesting sounding works by Sir Arthur Conan Doyle. 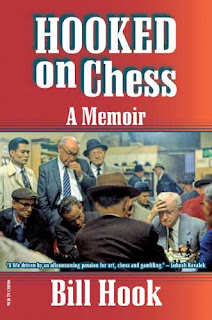 Hooked on Chess
A Memoir
By Bill Hook
New in Chess
Bill Hook is enjoying a remarkably long chess life Although admitting to being ‘deep, deep into the endgame’ (‘with an 82nd birthday looming‘) he shows no sign of chess retirement and has set his sights on playing at the next World Senior Championship.
Such a long life has many twists and turns and numerous stories of interest.
Following his release from a tuberculosis sanatorium, he indulged in his new interest: chess. His early learning experiences were gained in the hurly-burly world of chess cafes and hustlers. Colourful and eccentric characters abounded in such surroundings. An early sparring partner went on to become very famous in another world…his name was Stanley Kubrick! A little dispute over quarters and dimes ended their chess relationship.
Another sparring partner was Bobby Fischer. Losing their first four blitz games reduced the future World Champion to tears. Then a curious incident took place.
‘But one night at the Marshall Chess Club rapids we played a French Defense and a very peculiar thing happened. In the middle of the game Bobby made a strong move and I suddenly had an almost physical sense of the power emanating from it. And Bobby moved again with the same effect; it was as if he were playing with dynamic rays of force that I had a heightened sensitivity to. It happened once more and my position was busted.’
Hook never defeated Fischer again. (Incidentally, GM Speelman had a similar feeling of force when playing the young Kasparov.)
The vast majority of Hook’s high-level chess encounters came in his record-breaking 16 Olympiad appearances, representing the British Virgin Isles.
His game against Fischer at Siegen (1970) has been featured in numerous books and, in particular, the opening has become very well known. A game given in this book starts off in the same way:
Liberzon,V - Hook,W
Nice ol (Men) prel Nice (5), 1974
1.e4 e6 2.d4 d5 3.Nc3 Bb4 4.e5 c5 5.a3 Bxc3+ 6.bxc3 Qa5!? 7.Bd2 Qa4 8.Qg4 Kf8 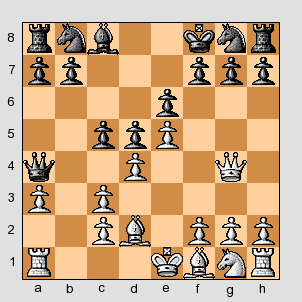 And after 9.Ra2? (Fischer had played 9.Qd1! two years earlier) White’s pieces ended up in awkward positions and Black was able to take advantage of the lack of coordination to infiltrate on the Queenside. Hook notched up a famous victory.

There is a sequel to the French Defence story. In 1990 Hook played Nigel Short in a blitz tournament. The opening of the game followed the famous precedent. ‘…and I said, Fischer - Hook, Siegen Olympiad, 1970.’ ‘Yes, I know’, and he followed Fischer’s moves exactly, deep into the opening. ‘After the game, Fischer showed me where I had gone wrong.’ ‘That I do not know’ and Nigel, in quite good humour, proceeded to crush me after I varied’.

It’s fascinating to read of the author’s experiences over many years and it’s interesting to read about the emergence of numerous young players - such as Kasparov, Shirov, Leko, Ivanchuk, and the Polgars - making their Olympiad debuts.

Other memories include Fidel Castro’s three-and-a-quarter-hour speech, Petrosian dancing, The USSR winning the 1984 Olympiad despite Kasparov and Karpov being still locked in their marathon match, America’s John Donaldson eloping with Soviet Elena Akhmilovskaya and many other vignettes. Attending 16 Olympiads has given Hook an unparallel view of chess history in the making. One of the author’s greatest career highlights was a gold medal for the best score on board one at the 1980 Olympiad.

The memoir covers other significant aspects of Hook’s life, such as gambling, painting and photography. There’s a plethora of good quality photos of famous chess players the author has met over his long chess life. Some smaller ones are interspersed with the main text but the main (mostly colour) selection is nicely presented on pages 97-127.

There’s a small sprinkling of games scores but they have no annotations; it just isn’t that sort of chess book, remaining true to being ‘a memoir’ rather than a collection of best games.

In these days when so-called celebrities have ‘autobiographies’ on the bookshop shelves by the time they are 20, it is rare indeed to see a new book written by - and about - the life of a chess player. This particular chess book cannot make any claims to improving your chess rating or making you unbeatable in the Sicilian Defence, but it is a very engaging read regarding a fascinating character. 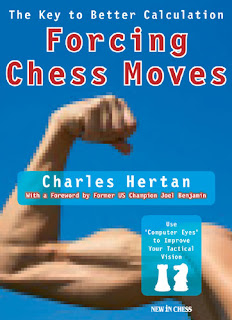 There’s a very well-written foreword by GM Joel Benjamin, who uses positions from his own games to demonstrate the ideas presented in the book. He also compares ‘Forcing Chess Moves’ to ‘Van Perlo’s Endgame Tactics’; stylistically, they are similar works albeit ones which analyse different phases of the game.

FM Hertan lays out the point of his work in his introduction.

‘What prevents me from finding the winning forcing moves more often? While hard work and talent certainly play important roles, my 29 years of teaching have shown me the central role of HUMAN BIAS in the failure to adequately consider key options. If we could shed our natural human thought tendencies and see the position through ‘COMPUTER EYES’, these biases might fall away, enabling us to consider other options which may hold the truth to a given position.’

The material is divided into the following chapters:

A series of exercises follows each main chapter.

FM Hertan develops the reader’s skills methodically, thus enabling each tactical lesson to be learned and absorbed properly. Often he will five a fairly basic example of a particular device and then follows it up with the same idea in a tougher setting.

For example, knowing the winning path from this position: 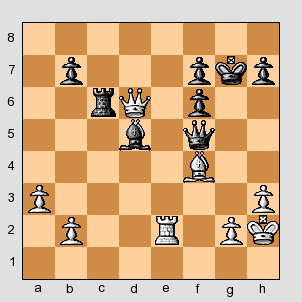 …should enable the reader to eventually force a route to checkmate in six moves (for Black) from this tougher nut: 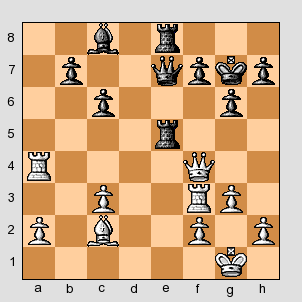 Netto - Abente
(Black can force a win!)
The winning moves can be quite shocking but they are the most forcing available. This author trains the student to automatically look at the most forcing moves first, however unlikely they may appear at first glance. The lowering of human inhibitions is exactly the method behind the ‘Computers Eyes’ school of thought advocated here.

The material has been very well-chosen. There are some classic examples but plenty of ‘new’ ones too.

There are, typically, two positions to a page in the ‘Study Material’ sections and four to a page when it comes to the ‘Exercises’. In a book running to 382 pages, it’s easy to see that there will be enough positions to keep the reader busy for a considerable time.

Fischer fans will doubtless go all ‘misty-eyed’ when they see the likes of this again…. 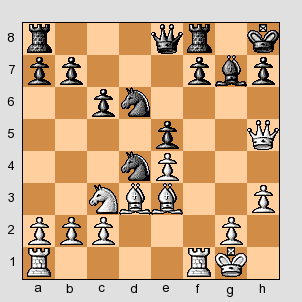 A useful ‘Glossary of Terms’ and an index of players’ names concludes a fine, pain-staking work.
And now, dear reader, it is time to test your own ‘Computer Eyes’ on the following positions! 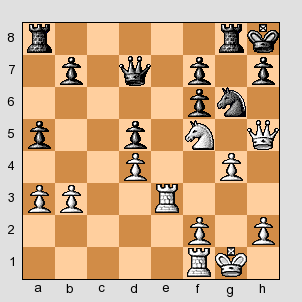 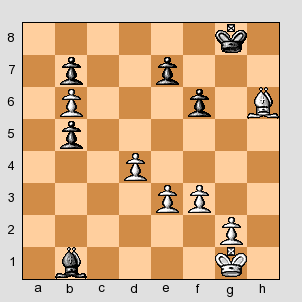 Levitina - Marinello (From the chapter ‘Endgame Forcing Moves’)
In real life, Black missed the best move here (and even managed to lose). What can your ‘Computer Eyes’ spot instead of the ill fated 34...Kf7 ? 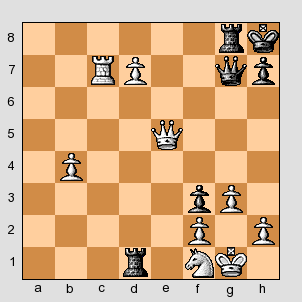 Geist - Burrows (From the chapter ‘Brute Force Combinations’)
White played Qxg7+ but could only draw. Which unlikely looking move would have been better?

If the sample positions appeal to you (as I’m sure they do), then you really should add this instructive book to your chess library.

The DVD sounds great. I've ordered my copy straight away.

I hope we see more of this type of thing

I'm curious as to the source regarding this statement in your review of Bill Hook's book:

"(Incidentally, GM Speelman had a similar feeling of force when playing the young Kasparov.)"

Was it in a book, interview, or where was it that GM Speelman said this about his experience with Kasparov?

Trying to find the primary source, thanks!

I'm away from my library at the moment, but as far as I can recall the comment was in 'Fighting Chess', the book about/by Garry Kasparov and it was in the notes to the game Speelman - Kasparov, Graz 1981.

The feeling of such "force" in chess interests me, as I've felt it several times myself while playing. My ears perked up when I read that others have felt it too!

I'm suspecting that there's a "psychic" aspect of chess that's not been generally recognized, hidden as it is within the intense rationality and logic of the game.

Gonna try to get hold of the book you suggested and find the reference. If you happen to determine it's in another book, please post the info! :-) Thanks!