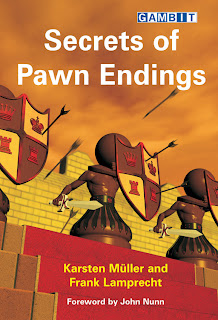 The first edition of this book came out in 2000; this is an updated version with corrections. I've never seen the first edition so this was all new material to me.
The book is split into sixteen chapters, starting with the very basics and working through some very advanced material.
The authors use what is known as the Nunn Convention to determine the symbols for annotation. Endgame specialist John Nunn, who provides the foreword for this volume, first used the convention in his own endgame tomes. For example, this involves using ‘!’ when the chosen move in game is ‘…The only move that does not change the result of the position without regard to possible repetitions of the position’.
Such precise meanings are also used to determine the other standard annotation symbols, requiring a great faith in the accuracy of the analysis.
The chapter titles give an excellent indication as to the book’s material.
King and Pawn(s) v King
King and Pawn v King and Pawn
Race of the Passed Pawns
Small Number of Pawns
Unique Features of the Rook’s Pawn
Fortresses, Stalemates and Underpromotion
Pawns on One Wing
Passed Pawns
Breakthrough
Pawns on Both Wings
Fight for Tempi and Manoeuvres
Corresponding Squares
Thinking Methods to Find the Right Moves
Complicated Cases
Simplifications
Exercises
Each chapter is around 12 pages long and packed with thorough - yet readable - analysis and there are exercises at the end of every one to test the reader’s developing skills. The final chapter presents a series of tests (without clues) to determine whether or not the lessons have been absorbed.
Practising the positions given in this book against Fritz and/or a human sparring partner will undoubtedly lead to an increase in a player’s endgame understanding, planning and general calculating ability. For example, it would be a good exercise to use this well-known position… 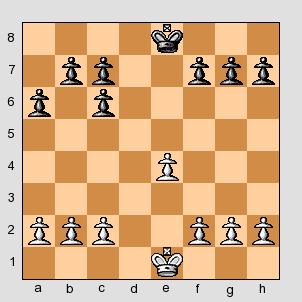 …which is the dream endgame for all players of the Exchange Ruy Lopez. The authors augment Euwe’s 1940 analysis and there is a genuine opportunity to master the technique required for White to win.

It is possible to lose oneself in the amazing universe of King and Pawn endings and this is the ultimate guidebook for what would certainly be an extraordinary journey. It is also an excellent book to dip into to dig out some quick snippets of entertainment. Every single page will deliver such goods.
‘Breakthroughs’ is a particularly good chapter for bite-sized nuggets.
The classics are all there, such as this one (come on…you can win for White from here!) 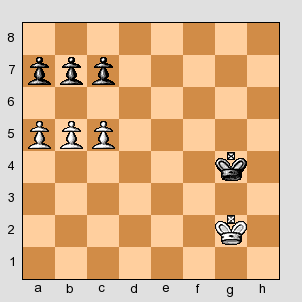 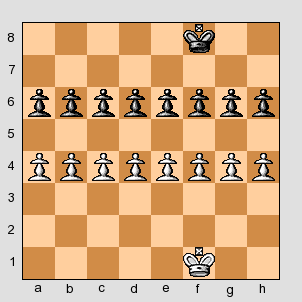 White can force a win - but incredibly there is only one way to do it!


Fanciful positions are actually kept to a minimum. The following breakthrough is a typical example, taken from ‘real life’. 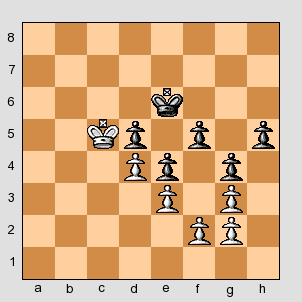 At first glance Black appears to be in trouble, but after his next move White… resigned! Can you spot the start of the breakthrough?

A very thorough and entertaining work! 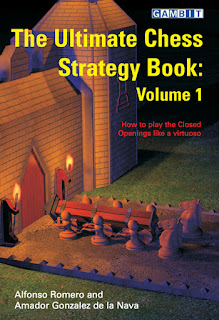 The basic format is similar to the excellent 'Test Your Positional Play' by Robert Bellin and Pietro Ponzetto.

As mentioned in the foreword by former World Champion Topalov: ‘The reader will not only exercise his understanding of chess, but will also learn in a quick and entertaining way’

Volume one focuses on play arising from Closed Openings; presumably volume 2 will take a good look at 1 e4 lines and plans.

The tests themselves take up the first 67 pages and the in-depth solutions cover the next 138. The players' names and game openings are well indexed at the end.

There are typically three tests over each two-page spread. The opening notes are very light but the fun starts once the initial phase has reached its end. Each critical position is accompanied by three very tempting choices and the reader is invited to carefully select the best way forward.

The illustrative games are very well chosen. The games of Karpov and Petrosian are well represented. The reader will see that trying to discover the secrets of a quiet looking, generically positional game can just as tricky as attempting to navigate a sea of tactical possibilities. The subtle plans and manoeuvres of a Petrosian can be as instructive as Tal attack.

I remember, many years ago, playing through the moves of some of the games from the Karpov-Sokolov Candidates match with some club mates at Guisborough chess club. Club supremo Stuart Morgan covered the relevant pages of the chess magazine and the rest of us tried to figure out Karpov's next moves. Despite the apparent simplicity of his play, his actual moves proved most elusive. So when a position from that match caught my eye in this book, I thought it would make a worthy sample… 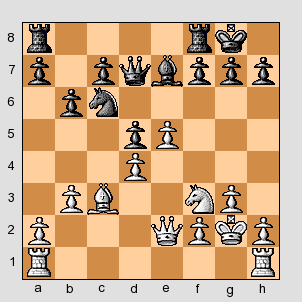 Now the reader has a decision to make. Should White…

A: Move the rook from a1 to c1 and the other to d1, with the idea of exerting pressure on the c-file, as well as against the future hanging pawns after black plays ….c5

C: Play 15 Rhd1 in order to double Rooks on the d-file with Rd3 and Rad1, preventing Black's counterplay with ….c5

D: Play 15 h4 threatening to meet …Nd8 with the Knight jump to g5, followed by Qh5 or Qd3 launching an attack against the Black King.

Here's a better known (and important) position - but do you know how to proceed? 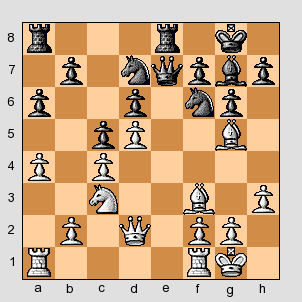 A: Play 15 Rae1, aiming to exchange the major pieces on the e-file, and exploit the advantage of the Bishop-pair in the ending.

B: Play 15 a5 fixing the Queenside, in order to continue pressing with Ra3-b3 or Rb1 followed by b4.

C: Play 15 g4, with the idea of a further advance f4, gaining more ground on the Kingside

Once the reader has tried to solve a few of the tests, the themes will become more familiar and a pattern should soon emerge; on which areas does the student score poorly and need to do some more work? The themes are not revealed until the one studies the solutions, of course.

Lucid explanations are given to explain why one plan is better than the others and points are awarded according to choice of answer. However, accumulating points does not lead to anything and no overall category of achievement is ever given; the scores are in isolation to each test. The given test games are analysed in impressive depth and plenty of supplementary games and positions are used to further demonstrate the points made in each lesson.

It is possible to use this book as 'just' a collection of well-annotated, instructive strategic games but to gain the maximum benefit it is important to apply oneself and enter into the spirit of the test format.

As can be seen, the covers to Gambit books are usually interesting, different and attractive. Bonus marks must go to the use of capital letters in the titles too; it's good to see they haven't succumbed to the trendy - but annoying - lowercase revolution.

Missed a review? Visit my achive: