John Foxx and The Maths at The Duchess 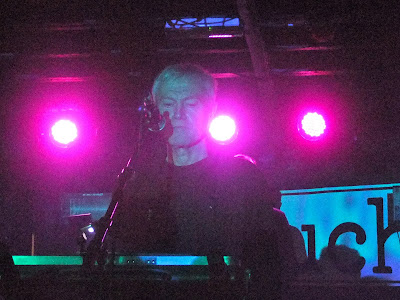 John Foxx and The Maths
The Duchess, York
24.10.2011
John Foxx and The Maths turned on the style to produce an excellent show in York last week. The set included classic tracks from the Ultravox days, a large slice of Metamatic and, of course, a showcase of the finest numbers from Interplay.
This was my second trip to The Duchess. Earlier in the year I saw Cara Dillon there. That sums up the diversity of music on offer at The Duchess; they really do cater for all tastes.
The Duchess doesn't look much like a music venue from the outside. The main door looks like an afterthought to a line of shops. On entering, one descends the steps to a darkened, cavernous room. This time, it was 'standing only' and as the stage is comparatively small it made sense to head to the front as soon as possible.
Tara Busch provided the support (more on Tara in a forthcoming post) and then it was time for the main event. The darkness of the venue was thrown into contrast by the explosion of colour lights from the stage and suddenly John Foxx and The Maths launched into Shatterproof. 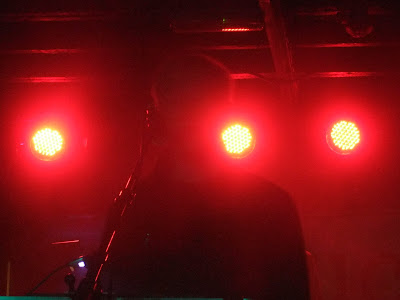 For a man who doesn't move very much on stage, John Foxx packs a lot of energy into his performances. Paradoxical? Perhaps...but seeing him attack the lyrics with a defiant snarl tells a different story.
Who are The Maths? All bar one of the current line-up were already present at the fabulous Roundhouse gig last year. For this tour, Benge and Serafina Steer were joined by Hannah Peel on backing vocals, keyboards and violin. 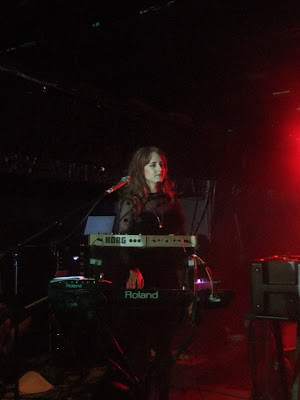 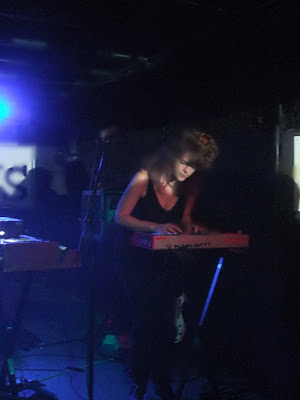 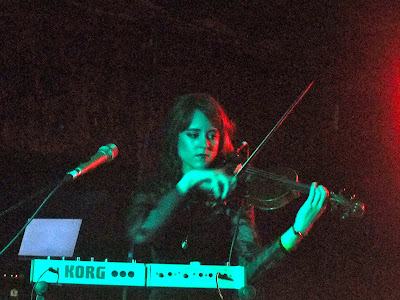 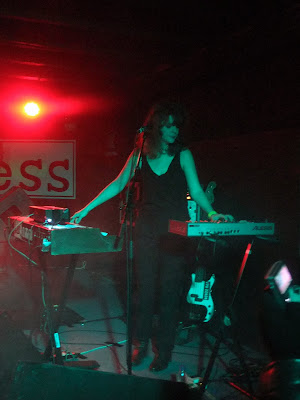 Benge kept himself very much in the background and it was difficult to get a decent photo of him. Standing behind John and usually in the dark, he can be seen merely as a shadow man on the following photo. 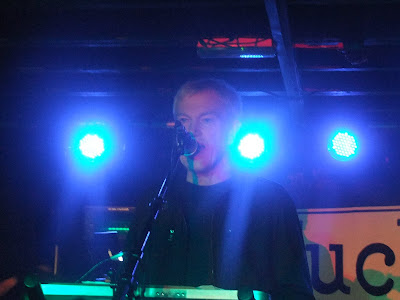 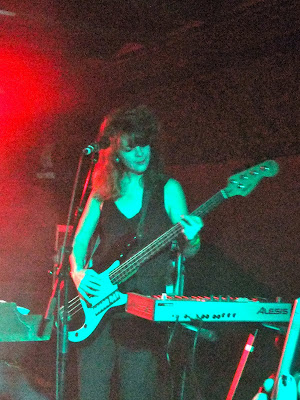 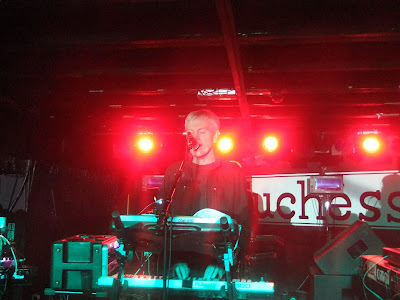 Set list:
Shatterproof
He's a Liquid
Evergreen
No-One Driving
The Running Man
The Shadow Of His Former Self
Hiroshima Mon Amour
A New Kind of Man
Plaza
Watching A Building On Fire
Dislocation
Interplay
Catwalk
Summerland
Just For A Moment
Encore:
The Good Shadow
Underpass
The set list reveals an excellent selection of material from various stages of John's career. This was not an exercise on crowd-pleasing nostalgia; for example, the tracks from Metamatic, dealing with urban decay, identity and isolation sound more potent now than ever. 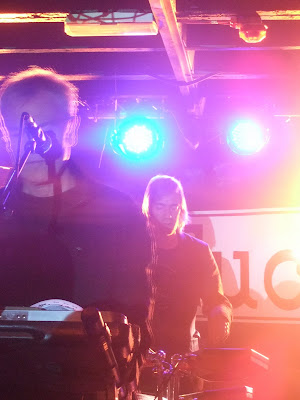 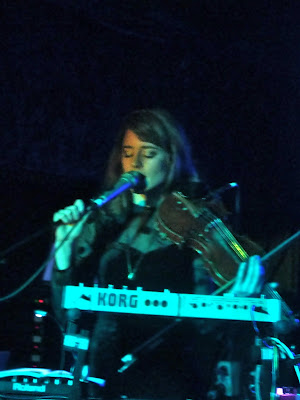 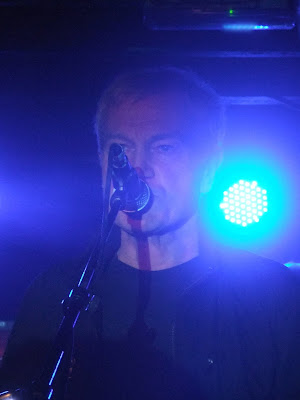 The music of John Foxx continues to evolve. Interplay is a fine piece of work, suitable for long-term fans and those who are looking for a handy jumping-on point.
A new, double CD was on sale during the tour, called The Shape of Things. CD1 is all new material and CD2 focuses on remixes of Interplay tracks. 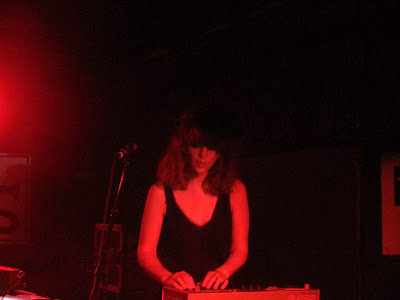 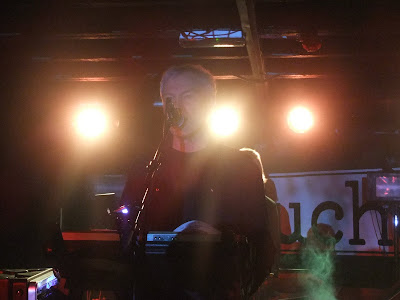 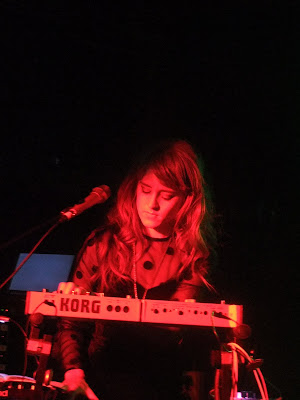 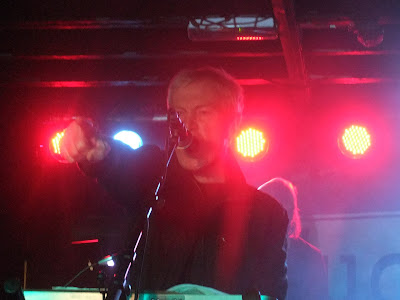 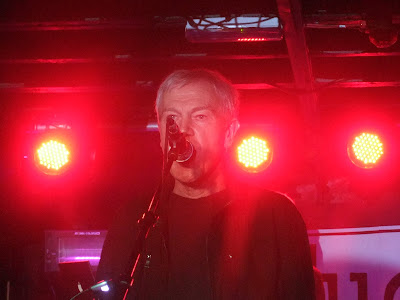 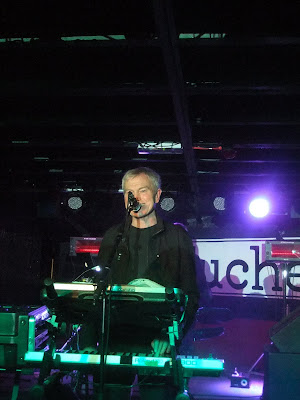 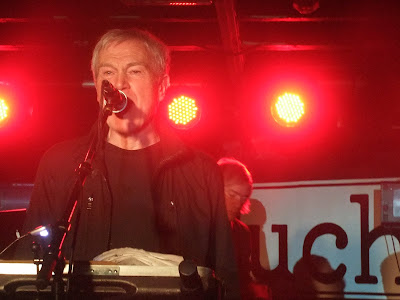 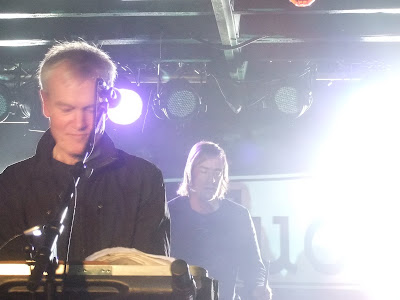 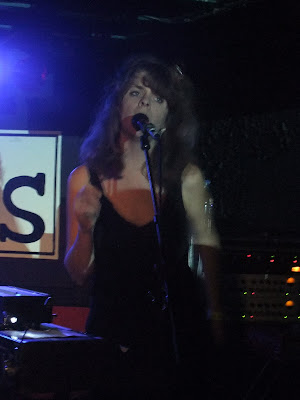 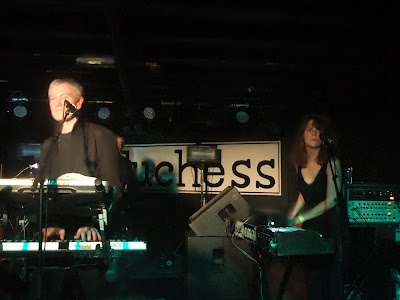 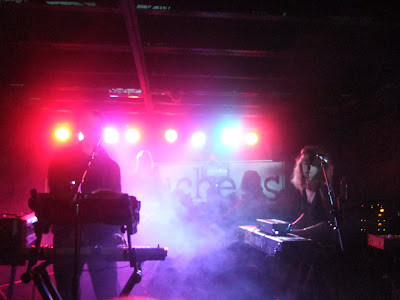 From my angle, it was an impossible task to capture the entire group in one shot. I could only manage three. 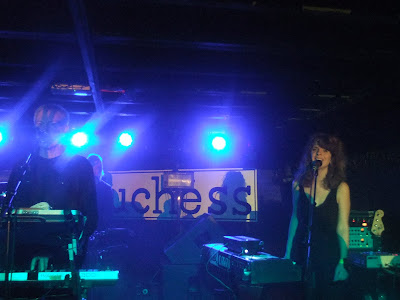 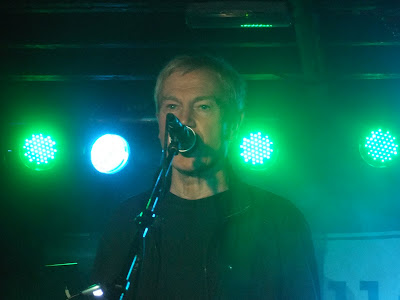 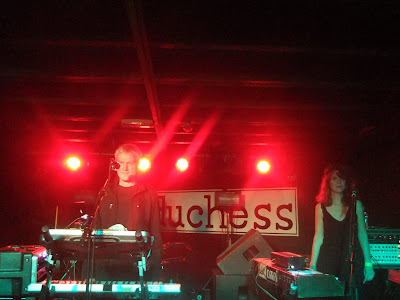 The show ended with John Foxx and The Maths posing like statues. However, they won't be standing still for long. As John Foxx and The Maths evolves further, we can look forward to a lot more music and hopefully more frequent tour dates.
It was a very impressive and enjoyable show. For me, it was one of the highlights of a very busy year.
From the floor, everything sounded great, although this review on 'Brigid's Blog' mentions sound issues on stage. By the way, Brigid has covered all of the tour dates in depth on her excellent blog, so it's well worth spending some time there reading about the differences between the gigs.
Three sites to follow, for all things Foxx:
John Foxx and The Maths
Metamatic
The Quiet City
Stop Press: The last two dates of the tour (Holmfirth and Sinners Day, Belgium) were cancelled due to a head injury suffered by John Foxx. We wish him a speedy recovery.
Posted by Sean Marsh at 03:50