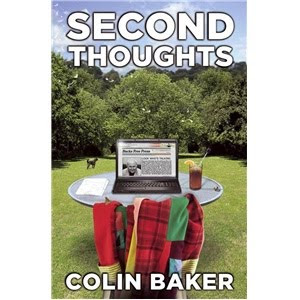 Second Thoughts
By Colin Baker
272 pages
Hirst Books
‘It’s all your fault, Dear reader’ begins the author, best known to most of us as the Sixth Doctor Who. However, all Timelords have far more than a single string to their bows and former TARDIS occupant Colin Baker is certainly no exception. Alongside his acting career, he has been many things, including a newspaper columnist for a considerable amount of time.
The 'fault' of the readers has brought about the publication of a new collection of his columns, as he goes on to explain:
‘…enough of you generous and discerning folk have seen fit to purchase Volume 1 of my articles written over a decade the Bucks Free Press, as to persuade Tim Hirst, the publisher, to risk his yacht, private jet and, more importantly, is rapidly growing reputation as a publisher in asking his colleague Louise McDonald to select more of my opinionated ramblings for your entertainment.’ 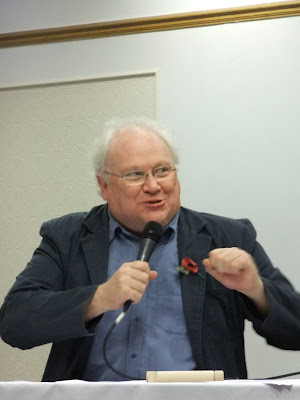 Volume 1, 'Look Who's Talking', was reviewed here. 'Second Thoughts' is more of the same, which is a good thing.
The selected articles are arranged in 21 chapters:
Topical Issues
Baker Towers
Eco Warrior
Colin vs. Public Transport
Doctor Who
Foibles, Friends and Fancies
Little Britain
The Beautiful Game
Abroad Education
Light Relief
More Mundungus
Election 2010
10 Years Ago
It’s ‘’Would have’’ not ‘’Would of!’’
Dicing with Death Wearing a Safety Helmet
Your Call is Important to Us
Wycombe Man Acting Up
Season’s Greetings
The very first of the ‘Topical Issues’ is a somewhat surprising swipe at the anti-BP stance in the wake of the Gulf of Mexico disaster, concluding: ‘All the sabre-rattling and unseemly Brit-bashing comments emanating from certain quarters in the United States are neither helpful nor fair’.
The 'Eco Warrior' returns, two chapters down the line:
'I am not alone in thinking that we humans are often more of a blight on this fragile planet than we are a benefit’. 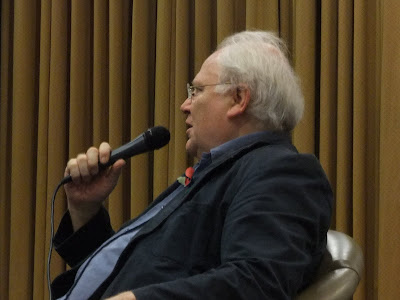 It's soon back to the more familiar targets, such as the MP expenses scandal:
‘…if they weren’t bright enough to see the potential electorial meltdown ahead of them, then they simply aren’t the right people for the job’. 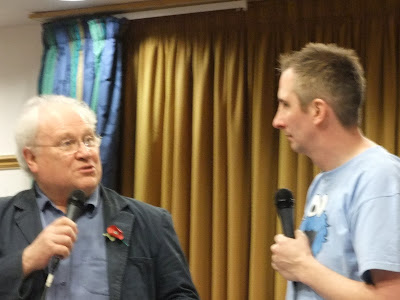 Colin being interviewed by
Charlie Ross at 'Dimensions 2010'
Elsewhere, there are attacks on other things we all generally agree on, such as the incredible amount of product packaging which has somehow become the norm (a kind endless cardboard Russian Doll, in some cases), abuse and misuse of the English language, queues and, of course, public transport. Forced to sample the delights of buses and trains after a driving ban, Colin discovered terrible truths some of us have known for years. For example, seasoned bus travellers have long been aware that despite the constant leaps in technology and the introduction of various information superhighways, we are still no closer to knowing exactly when our next bus is due.
‘Believe it or not, the departures board is pre-programmed and cannot be changed to reflect actuality, rather begging the question why, given this patent absurdity in a new state of the art bus station, there couldn’t be large notices somewhere explaining that the display board might be telling porkies'.
Doctor Who remains a substantial part of Colin's life. ‘Old Sixie’ himself wrote a nostalgic appeal for a revival of the show, back in 1999:
'...for all those future generations who might just love to surrender to the delicious thrill of terror at Saturday tea-time after the footie results, there is surely still an opportunity for the TARDIS to vwo-orp into life again, with well-constructed, imaginative plots showing that hi-tech effects are not essential for good story telling'.
The revival came, as we all know (complete with the sort of hi-tech effects the show could previously seldom afford).
As they were originally presented in newspapers, all of the articles in 'Second Thoughts' are relatively short (somewhere between one and two pages). This makes it an ideal book for dipping into, whether its a volume for the bedside table or one to read on the bus (if it ever comes).
I suspect the vast majority of the articles will strike a chord with readers. Most of it is firmly in the 'Grumpy Old Man/Victor Meldrew' league, elevated above mere rant by dint of Colin's natural wit, elegant turn of phrase and old-fashioned command of the English language.
'Sometimes I just feel the need to sound off. I am lucky in that I am able to write about the things that make my blood boil and share them with an audience that I fully understand has exactly the same daily battles in their own lives.' 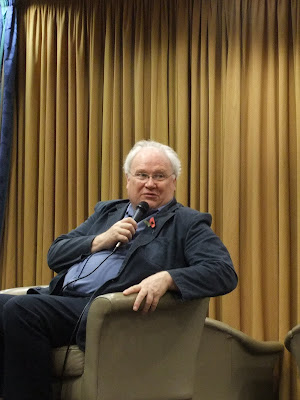 Tim Hirst of Hirst Books has done very well indeed to establish his company as one of the leading publishers in this genre, plus a busy schedule of original fiction. Hirst Books are attractive and thoughtfully produced.
My next review - due early next week - will feature another Hirst Book, this time Matthew Waterhouse's 'Blue Box Boy'.
Posted by Sean Marsh at 00:01