Time now to take a look at the most recent selection of instructional and self-improvement chess products. There's quite a lot of them about and they come from several different publishers.
Without further ado, let's get stuck in - starting with the two new volumes of the 'Strategy University' series from ChessBase. 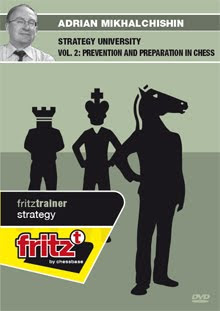 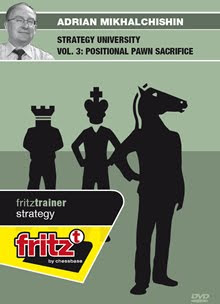 Strategy University
Volumes 2 & 3
By GM Adrian Mikhalchishin
Chessbase
Volume 2: Prevention and Preparation in Chess is all about the art of prophylaxis and prophylactic thinking, following the lessons of the great Nimzowitsch. GM Mikhalchishin demonstrates that prophylaxis - likened to taking medicine against something bad happening - isn't always about defence and can form part of one's normal game plan and preparation.
Using key illustrative games, he teaches the viewer how to go about spotting - and stopping - the ideas of the opponent. The classics of chess literature are plundered, with the games of Rubinstein - ('The King of Exchanges') being particularly well represented. There are numerous examples of his special vision when it came to trading the correct pieces to leave the opponent's position in a worse condition.
Volume 3: Positional Pawn Sacrifice is self-explanatory. Rarer and more difficult to spot than tactical pawn sacrifices, they can nevertheless change the course of the game just same.
The illustrative games are well chosen and highly instructive, as always. Mikhalchishin's own games make several appearances this time and Romanishin, Kasparov and Beliavsky are other prominent guests.
The latter is featured in this classic example, showing how a positional pawn sacrifice was used to ensure the enemy King was caught in the centre. 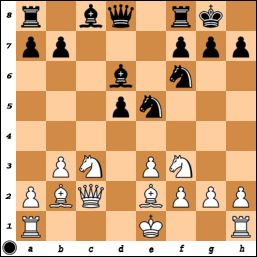 Korchnoi - Beliavsky
Leon 1994
'Big Al' played 11 ...Nxf3 12 Bxf3 d4! and after 13 exd4 Re8+ 14 Kf1 the long term benefits of Black's position outweighed the loss of a single pawn (0-1, 32).
As usual with DVDs by GM Mikhalchishin, the delivery is fast and heavily accented which make it heavy going at times. Yet the material is top-notch and will be of use to top end of the improving club player scale. 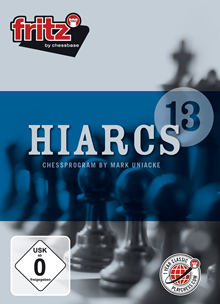 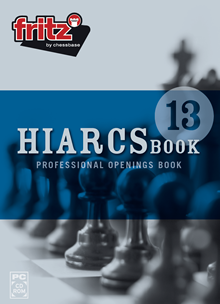 Hiarcs 13 and Book
ChessBase
Anyone serious about wanting to improve their chess really must invest in a decent chess program. Hiarcs 13 is the latest version of a popular product, playing at approximately 100 ELO points stronger than the previous edition.
I'm sure most readers will be familiar with the basic features on offer from such products (previous editions have been reviewed here in former times). Suffice to say, Hiarcs 13 will mercilessly crush the vast majority of chess players on its serious levels. Fortunately, it hasn't been designed merely to play chess; it is an excellent training partner too. Adding the professional openings book will enable students to prepare for future chess battles in enviable depth. 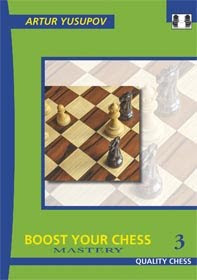 Boost Your Chess 3
Mastery
By GM Artur Yusupov
304 pages
Quality Chess
GM Yusupov’s highly regarded series continues, with the 'Mastery' phase of boosting your chess.
The format is identical to previous volumes in the series. Each chapter presents a complete lesson on a specific subject, complete with test positions. The subjects include 'Hanging pawns on c3-d4', 'Candidate moves', 'Pawn storms' and 'Knight against Bishop'.
I like the pacing of the lessons; each one lasts for six or seven pages before the test positions are introduced, so none of the chapters ever outstays its welcome.
The book concludes with 'Final Test', challenging the reader with a selection of positions without clues. Here's one to try: 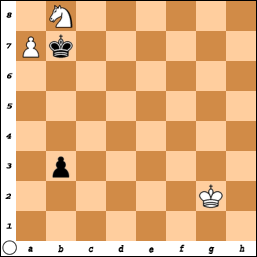 White to play
(The end of a study by D. Gurgenidze)
The whole series is very accessible to club players, who will enjoy studying about a wide range of important topics. 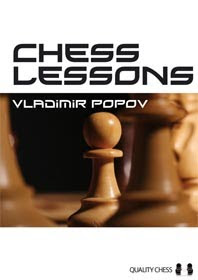 Chess Lessons
By Vladimir Popov
256 pages
Quality Chess
Nadezhda Kosintseva provides the introduction, telling how she and her sister Tatiana came to enroll in the chess class of Vladimir Popov.
Judging the book purely by the title, is would be easy to think that was just another easy primer for inexperienced players. However, the more I read, the more I realized that the quality of material on offer was of a very high calibre.
‘The main aim of this book is to help the reader to minimize the quantity of errors in his games through studying the material and solving the exercises’.
To that end, the author offers a large number of instructive games and positions. Lots of them were new to me. Using the games of his students - the Kosintseva sisters and Karmen Mar in particular - Popov has brought to light numerous very fresh position.
There are 21 chapters, each one dealing with a specific theme, such as ‘Errors Due to Lack of Knowledge’, ‘Asymmetrical Exchanges’, ‘Spotting Aggressive Sorties’ and ‘Obvious Moves and Reflex Answers’.
There’s a strong emphasis on detecting errors and working hard to correct them. There are test positions at the end of the chapters. Some are best solved individually, but others work best as a ‘two handed’ training exercises, to be played out with your analytical partner.
It’s interesting to read about how the coach’s students tackled the problem positions. The results were variable, often according to the playing style of the student, but Popov constantly reiterates that mistakes are a catalyst for improvement.
The final chapter, ‘Hard Work Pays Off!’ offers a selection of positions from the Kosintseva sisters’ games, as a sort of redressing of the balance to atone for showing so many of their errors earlier in the book.
It’s a very interesting book and definitely a cut above standard instructional work. It is reminiscent of some of GM Dvoretsky’s books in some respects, albeit in a more accessible way.
Coaches and trainers will find much of interest and hard working students of chess should be able to derive a lot of benefit from the material even if they have to work alone. 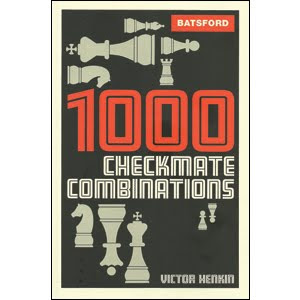 1000 Checkmate Combinations
By GM Viktor Henkin
336 pages
Batsford
This is a new edition of a book originally published in Russian back in the 1970s. There is a foreword by Tal, who says '...Chess has now achieved such a level that inventing something fundamentally new is unbelievably difficult'. One wonders what the great champion would make of the world of chess now, several decades on.
As the title suggests, this is a study of checkmate positions. They are arranged by piece, starting with the Rook.
All of the classics are there, but of course the material stops in the 1970s. However, checkmate positions don't date and this is an entertaining collection, enhanced by numerous quotes and anecdotes from great players.
The reader will be kept busy for quite a while. Here's an easy starter to try. 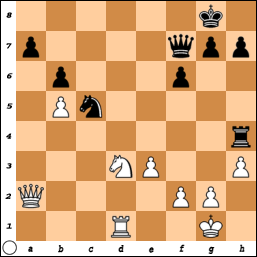 Bronstein - Vasyukov
1973
Position from a blitz match. White, playing for the flag
to fall, indulged in some hocus-pocus. What? 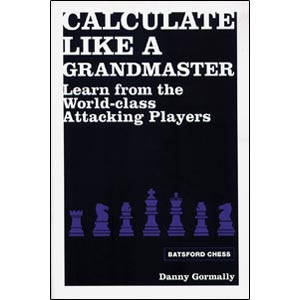 Calculate Like a Grandmaster
By GM Danny Gormally
256 pages
Batsford
A rare original from Batsford. It was released in 2010 but has only just found its way to Marsh Towers.
GM Gormally believes that '...without thorough discipline it is impossible to fully utilise your chess potential'. This book aims to guide the reader towards that ideal, via the course of eight chapters:
Tal and the tree of plenty
Self Handicapping
Simply Shirov
Topalov and the age of computers
The magic of Moro
Vishy Anand - Speed Superstar
Bobby, the two K's and Les Enfants Terribles
My Own Experience
The analysis of key games runs deep and is reminiscent of Batsford books from earlier times, with variations by the name of 'C1b' and the like. Advanced players will enjoy playing through the lines of analysis.
Along the way, there are the Grandmaster's thoughts on various subjects, such as the impact of computers on the modern game and the psychological aspect of playing difficult opponents.
There are quirks, mainly within the autobiographical material, which is interspersed throughout the text. A one point, GM Gormally bemoans the lack of opportunities for chess professionals in the UK, but this rather at odds with his tale of a drunken attempt to converse with GM Kasparov and the confessional piece 'The typical day of an ICC addict'. Professional opportunities can't be expected to fall out of the sky.
There are a number of misprinted pages (48, 49 and 56) which aren't easy on the eye and as usual with Batsford's recent output, the cover is dull and at odds with the modern market. Nevertheless, it is still good to see the former giant of chess publishing continuing to releases books despite troubled times. 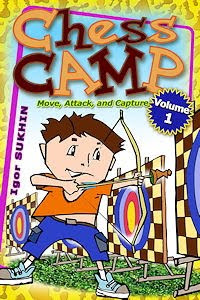 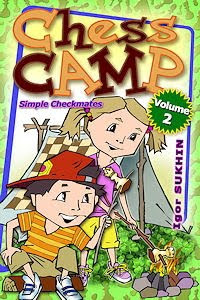 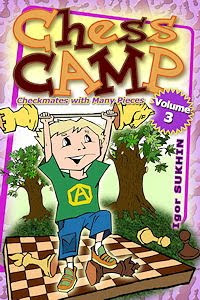 Chess Camp Volumes 1-3
By Igor Sukhin
114 pages each
Mongoose Press
Chess Camp is an attractive series of books aimed at young juniors. Each volume contains over 600 chess puzzles.
The first two volumes are very basic, dealing with elementary captures, checkmates and the like. Volume three is really where the fun starts. It’s all still in the realms of the ‘basic’ category, but the material often features an unusual twist, such as positions in which two pieces achieve checkmate against a entire opposing army. 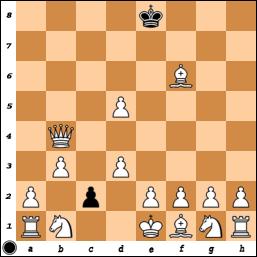 Black to play and triumph over adversity!
There are also a number of puzzles linked according to opening and endgame themes, plus some more unusual creations ('All Pieces on the Same File' etc).
I tried some of the positions from volume 3 on numerous classes of 7 to 8 year-olds and they provided a suitable combination of instruction and challenging fun.
The Chess Camp books are very attractively produced hardback editions. They will be useful for junior coaches working in Primary schools and for parents who like to work with their children at home. 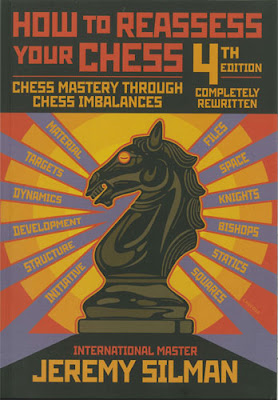 How To Reassess Your Chess
4th Edition
By IM Jeremy Silman
658 pages
Siles Press
(European distribution: New in Chess)
Don't be fooled by the '4th Edition' tag; it may lead you to believe that the book has merely enjoyed a few tweaks and updates. In fact, this new version of a modern classic has been completely rewritten.
The ethos of the book is to encourage students to choose moves and plans based on 'imbalance-orientated criteria', with the material arranged thus:
The Concept of Imbalances
Minor Pieces
Rooks
Psychological Meanderings
Target Consciousness
Statics vs. Dynamics
Space
Passed Pawns
Other Imbalances
Answers to Tests
Instructive Articles
The book is officially aimed at players rated between 1400 and 2100. It's a big book and I can't do it full justice in this round-up column, so I'll return to it when I have more time and space, which will hopefully be some time soon. 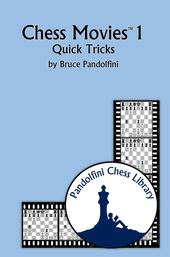 Chess Movies 1
Quick Tricks
By Bruce Pandolfini
208 pages
Russell Enterprises
Chess Movies is a series of very short games, with a diagram and a comment after each move. This means a chess set is not required to play through the games. The author likens this to watching a DVD, when ‘...you can ‘‘stop’’ the action and take time thinking about what you’re seeing and what’s being explained to you, as if you were home watching on your own DVD.’
There are 64 illustrative games - or ‘chess movies’ - with nine moves being the maximum length. Fatal deflections and fork tricks are well represented.
The material is extremely light and is suitable for young juniors and novices.
The next round-up column will follow in a couple of weeks. Before that, there will be a column devoted to a review of GM Korchnoi's revised edition of 'My Best Games'.
Posted by Sean Marsh at 15:02