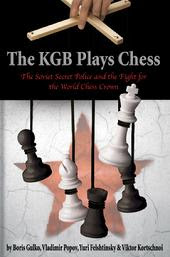 The Soviet Secret Police and the
Fight for the World Chess Crown
By Boris Gulko, Vadimir Popov,
Yuri Felshtinsky and Viktor Kortschnoi
176 pages
Russell Enterprises
'The battles about which you will read in this book are not between the powerful chess masters sitting at the chessboard, but between the powerful Soviet secret police, known as the KGB, on the one hand, and several brave individuals on the other.'This new book from Russell Enterprises contains no chess games and no diagrams. Despite the lack of those normally standard features, there is plenty of interest here for chess fans.Here's a breakdown of what to expect...

About the Authors
Grandmasters Viktor Kortschnoi and Boris Gulko should be well known names to chess players. Both left Russia to live elsewhere. Kortschnoi claimed political asylum at the end of a tournament in Amsterdam. Gulko went on three hunger strikes and suffered a life of difficulties before finally being allowed to leave. Remarkably, Gulko's score against former World Champion Gary Kasparov is a very impressive 3-0.The other co-authors may not be so well known in the world of chess. Vladimir Popov is a former KGB Lieutenant and Yuri Felshtinsky is a Russian historian.

Gulko reveals a little bit about the main contents in his interesting introduction, whetting the appetite for what is to come. For example, Tal's suggestion that Kortschnoi would have been killed if he had managed to beat Karpov in a World Championship match is confirmed as a fact rather than a piece of speculation.

There's a quick run through some basics regarding Soviet World Champions and the main characters of the book. Already there are some startling stories. According to Gulko, even former champion Smyslov (hardly the most political of the bunch) was involved in some less than savoury incidents. For example, he '...wrote letters to his fans in the upper echelons of the government, got his rivals withdrawn from tournaments, and took their places for himself'.

The KGB Plays Chess by Vadimir Popov and Yuri Felshtinsky

This chapter and the next one make up the bulk of the book and tell the story of KGB involvement in chess activity from both sides.

The accusations come thick and fast. Here's some samples of the content and tone:

'It should be noted that quite a number of Soviet grandmasters were state security agents. Tigran Petrosian, Lev Polugaevsky, Yuri Balashov, Rafael Vaganian, Eduard Gufeld, and Nikolai Krogius, the head of the Chess Directorate at the State Sports Committee, had extensive experience in collaborating with the KGB as covert agents'.

The book even name the individuals who recruited them.

'Like all Soviet sportsmen, chess grandmasters received only a negligible part of the payments that were due to them, since a lion's share of their winnings went to the national treasury and to sports bureaucrats.'

Some of the plots and plans would be too fantastic even for a James Bond movie. Boris Spassky (currently very ill following a stroke) had a particularly complex relationship with the higher powers. His romantic involvement with a '...female employee of the French Embassy' may have appeared innocent enough, but her grandfather was general in the czarist army who had fled for France following the 1917 Revolution.

A plan was hatched. Spassky must be 'encouraged' to end the relationship. A covert operation involved breaking in, locating underwear belonging to the woman in question and planting pubic lice '...procured from one of Moscow's dermatological-venereal medical centres'. The plan was unsuccessful.

The proposed method of Kortschnoi's assassination is revealed here too, as is the source of the Soviets' inside information from the enemy camp at the World Championship matches of 1978 and 1981. Apparently, the wife of one of Kortschnoi's 'young European' helpers had been recruited, under the codename 'Amigo'.

The case of Gulko features heavily in this chapter. Part of the problem of his desire to leave Russia was the fear that he would help Kortschnoi prepare for Karpov. Later on, when Kasparov was starting his explosive trip to the top, Karpov recognised the threat to 'his' title of World Champion, and wanted Gulko to leave after all, so he wouldn't be in a position to be able to help Kasparov.

There's considerable attention given to Karpov; his battles with Kortschnoi and Kasparov were, of course, highly political and far from being level playing fields. When it came to enjoying influential friends in high places, it was definitely a case of some players being more equal than others.

Other sports are brought into the discussion, such as the sad case of gymnast Olga Korbut. Her popularity around the world in general - and the USA in particular - led to her coach, Knysh, becoming an agent for the KGB. His repeated sexual abuse of Olga did not make it into his regular reports.

This is Boris Gulko's story, told from his own perspective. It's his first hand account of how difficult life was for a refusenik. There's a relentless series of arrests and hunger strikes.

We get to read some stories from the opposite side to the earlier chapter. For example, Ray Keene and Larry Christiansen visited Gulko when they were in Moscow for the 1982 Interzonal. Ray encouraged Gulko to write his story (by hand - laptops, email and the like were not available then) with the idea of taking it back to England and use it in chess magazines to bring his plight to the attention of the world. Ray, a former second to Kortschnoi, suspected his luggage would be searched on departure, so the manuscript was placed inside Christiansen's luggage. Needless to say, the latter's cases were opened at the airport; Ray's room had been bugged from the start, so it was quite clear where the authorities had to look.

This is all hard hitting material, which demands the reader's attention.

It's a pity that Kortschnoi's contribution is limited to six pages. Although it's all very interesting stuff, there's no doubt that he could fill many books with stories of his own.

Sometimes he seems to have been caught up in a real life version of the 1960s TV show, 'The Prisoner', unable to escape the all-seeing eyes of his former masters.

'...I moved into my own apartment in Wohlen, Switzerland and had a telephone line installed in it. My number was not yet listed in the telephone directory, but the first call I got was from the Soviet embassy - I was informed that I was being stripped of my Soviet citizenship'.

Letter from Vladimir Popov by Vladimir Popov
The final chapter is a reproduction of the letter sent by Popov to Felshtinsky in 2007, highlighting the danger brewing to the letter's recipient as well as to Kasparov, by now a real political thorn in the sides of some people.The whole book is a gripping study of fear, paranoia and the struggle of the individual against the powerful system. My only complaint is that there isn't more of it, as it makes for compulsive reading and leaves some stones unturned (who was 'Amigo'? Why did Spassky allow himself to be used as such an obvious pawn in the game against Kortschnoi in the 1977/8 Candidates' cycle? What was the truth behind Dr. Zukhar's powers in 1978...?).The world has certainly changed over the years. It's impossible to imagine that this book would have been published even just a few years ago. Some of the people named in unfavourable circumstances are still very much alive and kicking, so it will be interesting to see if there will be any sort of reaction to what has been revealed.This is a brave release from Russell Enterprises. It's unusual to find a chess book which will appeal to non-players too. Anyone looking for a product to improve their chess skills will not find it here, but those looking to delve into the murky world of top-level chess politics will find a goldmine.For further details about Russell Enterprises and their books, please click here.
Posted by Sean Marsh at 00:05