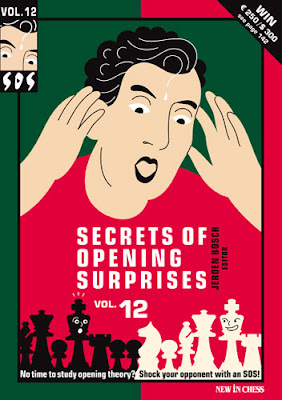 Secrets of Opening Surprises
Volume 12
By Jeroen Bosch (Editor)
141 pages
New in Chess
The successful SOS series continues with volume number 12. The format is exactly the same as in the previous volumes: at the start of the book, a diagram is given for each SOS to whet the appetite and then each one receives a full chapter of coverage.
One impressive aspect of the whole series is just how early in the game the opening surprises arrive. The earliest appears on the second move, in Jeroen Bosch's chapter on 'Preparing the Staunton Gambit'. The big idea is to play:
1 d4 f5 2 f3 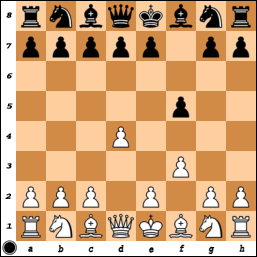 The author was inspired to investigate this strange move by a mention in Bern and Johnsen's excellent book, 'Win with the Stonewall Dutch'. There is a certain logical analogy to made with 1 e4 c5 2 c3; White is preparing to occupy the centre with a second pawn. There are some little twists to keep on a separate path to the standard Staunton Gambit lines.
In addition to the Dutch Defence, the surprises occur in the Trompowsky, Alekhine, French, Grunfeld, English, Lion, Centre Game, Scandinavian, King's Indian, Pirc, Ruy Lopez, Slav, Sicilian and Semi-Slav. That's quite a range of openings.
My two favourite ideas in this volume are:
1) Dimitri Reinderman's feature on 1 e4 d5 2 exd5 Qxd5 3 Nc3 Qe5+, called 'Check Like a Patzer in the Scandinavian'. 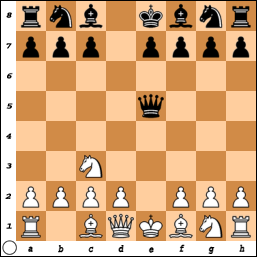 2) Alexander Finkel on 'Pirc for Endgame Lovers', 1 e4 d6 2 d4 Nf6 3 Nc3 g6 4 f4 Bg7 5 e5!?, which sees White allowing a Queen swap after 5 ...dxe5 6 dxe5. Indeed, the endgame must be appealing as it attracted interest from Bronstein, Velimirovic and Hector - three players who definitely avoided simplification as a rule!
There's nothing too deep here; each opening surprise receives, on average, 6-8 pages of explanation and analysis. So it is fairly easy to absorb the main points and get the surprises into one's arsenal as quickly as possible.
Traditionalists will be appalled by some of the given suggestions; club players will be delighted. I think there will be a lot of fun in store for players who aren't afraid to answer the call of an SOS. 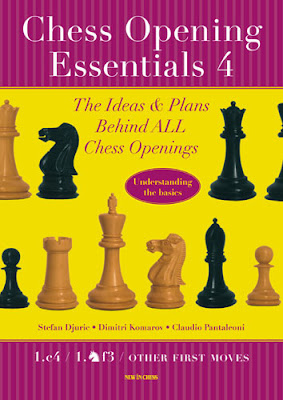 Chess Opening Essentials 4
1.c4/1.Nf3/Other First Moves
Stefan Djuric, Dimitri Komarov and Claudio Pantaleoni
254 pages
New in Chess
This is the fourth and final part of a major series covering all chess openings. It provides coverage of the English Opening, 1 Nf3 and the rarer openings (including the real oddballs such as 1 a4 and 1 f3).
There is a short introduction to each opening, followed by a section running through all of the relevant lines. Clarity is the intention; the layout is very sensible and easy on the eye. The lines are not cluttered with variations and there's very good use of colour to highlight names and key points. A selection of (unannotated) games is provided for each opening.
Transpositions lurk at virtually every corner of the English and Reti openings and the authors do a good job in highlighting them throughout the book.
One word of caution: the book can only go so far into a position and sometimes the concluding remarks are not always helpful. For example, in this position, the authors sum things up thus... 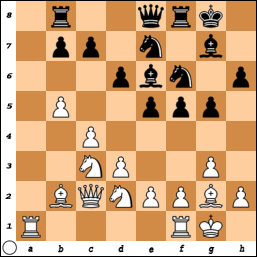 '...and ...Qh5 is on its way, with a menacing-looking attack for Black, at least to the human eye. However, chess engines approach the game with a disconcerting sangfroid, and in fact here they prefer White's game!'
All well and good, but a few pointers fort he human eyes would have been appreciated, as it still looks to me that the Black attack will be troublesome and somewhat worrying from the other side of the board. Knowing that a computer disagrees isn't necessarily comforting.
All in all, this is a very readable opening guide which does exactly what it sets out to do - explaining the ideas and plans behind behind chess openings. It is suitable for club players for club players who prefer no-nonsense explanations to confusing analytical thickets. 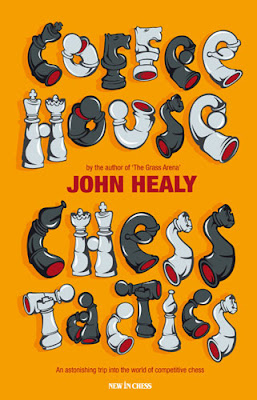 Coffee House Chess Tactics
By John Healey
135 pages
New in Chess
It's not often one comes across a sentence such as this on the first page of a chess book:
'I was just finishing a twelve month sentence in Pentonville prison...' It comes at the start of the opening, 20-page chapter titled 'Blood Sport', in which former bad lad John Healey tells of his introduction to the world of chess.
Subsequent chapters show examples of fairly elementary chess tactics taken from Healey's own games. Some of the positions are unusual, such as this one: 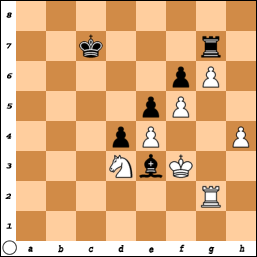 John Healey - Anthony Weleminsky
White found the very nice 1 Rg5!
There's a lot of white space in the book, often as much as half a page at a time. Putting two positions on the same page would have cured this problem and given the impression of more substantial content.
Rather than being 'Fascinating and compelling' and a book which '...takes the reader on an astonishing trip into the world of competitive chess', I found this to be more the sort of volume that Fred Reinfeld used to knock out every weekend. It works best as a primer for inexperienced players wishing to learn more about elementary tactics. 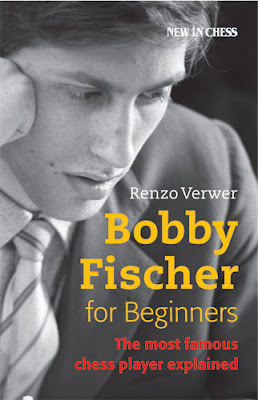 Bobby Fischer for Beginners
By Renzo Verwer
127 pages
New in Chess
Recent events have shown that Bobby Fischer will not be allowed to rest in peace. Just as his story continues after his death, so does the stream of Fischer-related books.
This one offers a different approach to the standard game collection; it attempts to break down Fischer's complicated life into easily digestible chunks.
The titles of the main chapters are based on Fischer quotes and they set the scene well.
'Children who grow up without a parent become wolves'
'I don't believe in psychology. I believe in good moves'
'My crime was simply that I had nothing more to say to these gangster police officers of Pasadena!!!'
'I'm Bobby Fischer, the great chess player'
'Fischer Random Chess: the strongest player wins'
'Bobby Fischer was my first boyfriend'
10 Fischer games are included at the end of the book, with very light annotations. I'm not convinced by the entire selection. One is from a simultaneous display (Fischer lost in 12 moves) and one is his Evans Gambit trinket against a long-retired Reuben Fine. There are definitely better games which have been left out of the select bunch.
The book is written in chatty style. One little story I found amusing told how he introduced himself to a girl on a beach with the words: 'I'm Bobby Fischer, the great chess player' which failed to have the desired effect. Once he established that the girl was from Holland, he tried an different approach, but his question, 'Do you know Max Euwe?' was clearly not the most effective chat-up line available.
There's a good selection of photographs from various stages of Fischer's life. As usual when it comes to Fischer photos, there is an air of sadness about them and a feeling that things should have been much different.
In truth there is little that is new here, but then the book never really claims otherwise. It's a good starting point for anyone wanting to quickly get to grips with the basics of Fischer's incredible story, but as the title suggests, it is all aimed at a particular audience.
To finish off this article, here's a piece of Fischer magic to remind us all what we missed after 1972. 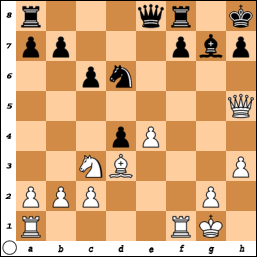