We have waited quite a long time for this book to appear. The process from the first mention on 'forthcoming' lists to publication includes plenty of tales about missed deadlines (see my interview with GM Seirawan in this month's CHESS magazine). 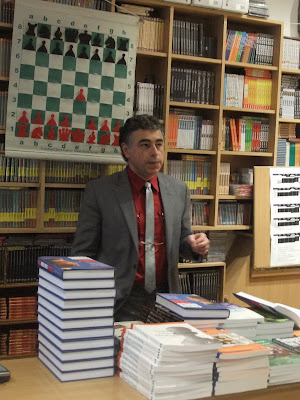 One of a number of photos I took during Yasser's recent trip
to the Baker Street chess centre. He demonstrated a game
from 'Chess Duels' - a defeat to Boris Spassky

That the book was well worth the wait is beyond question. It has the look and feel of a special book, with it's sturdy hardback binding and colourful dust jacket. The page count is impressively high. There is a lot of prose and nothing by way of white space or filler material. 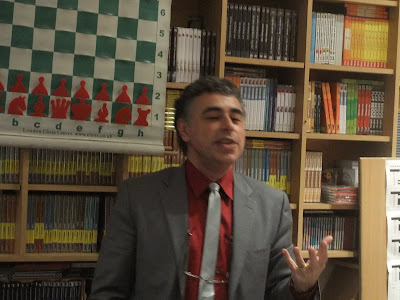 Essentially, this book tells the stories behind Yasser's meetings - on and off the board - with a plethora of World Champions.

The introduction covers Yasser's early life and provides a brief overview of his career. The it's straight into the main chapters, which are arranged in the following order:

The first two chapters cover his meetings with World Champions he met but never played at chess. These are Fischer, Botvinnik and Euwe. Korchnoy and Larsen are briefly covered too.

Yasser's outlook is generally very positive and his style is chatty, witty and engaging. It's a tough task to find mentions of people he doesn't like; it boils down two - Linares frontman Luis Rentero and journalist Dimitrije Bjelica.

Everybody else receives friendly treatment. There is no doubting Yasser's great respect for his chess champion rivals. He seems to have a very natural flair for simply getting along with people, despite the great range of characters and personalities involved.

There are some great games on show. As White, Yasser preferred closed games, so fans of 1 d4 will find lots of interest here. He was probably the greatest adherent of 4 Qc2 against the Nimzo-Indian Defence during the lengthy gap between the old masters losing interest and the turbo-charged preparation led by Kasparov in the 1990s.

As Black, the Caro-Kann makes the most appearances. His games against Spassky and Karpov are particularly good examples of that particular opening in action. I was surprised to see only one example of the French Defence, and that was in his famous game against Karpov (mentioned in an earlier column, here: http://marshtowers.blogspot.com/2010/02/chess-reviews-128.html )

'Upon seeing this move, Boris committed a wonderfully blatant rule violation and openly spoke to me: Yasser, why do you torture me with this Caro-Kann business?'

The little stories, anecdotes and other observational material act as the perfect compliment to the chess action. Smyslov was the first chronological World Champion Yasser met over the board and he was initially taken aback by the former's curiously clumsy style of moving the pieces.

'Trades were rather strange affairs: Vassily would grab my pawn or piece with his hand, lift and remove it from the board, and then grasp the capturing piece or pawn as awkwardly as possible setting it upon the captured square'.

Later, it became easier to understand; Smyslov's eyesight was very much on the decline.

Meeting Fischer - during the 1992 'World Championship' match, was made potentially difficult when it was made clear that Bobby didn't like Yasser's description of him as 'The Ghost of Pasadena'.

'I therefore resolved to apologise to him and receive his forgiveness. When we went to shake hands I held on to his while apologizing. I didn't let go until he said, ''Let's forget the whole thing''.

Being 'in the ring' with the best players in the world is one thing; to beat them is something else. This endgame, played at the 1986 Dubai Olympiad, brought down the best of the best. 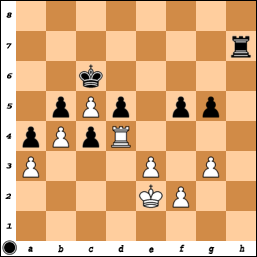 I have already given a little bit of coverage to this famous game over at:
http://mongoosepress.com/Times/ (Scroll down for the entry dated 15 February 2010). I didn't know, until I read 'Chess Duels', the story about what happened at the start of the game. Dimitrije Bjelica attempted to present Kasparov with a set of coins and then...

'...Garry took one look at Bjelica, took a second downward look at the coins and whacked the box away with his hand. Hard! Coins started flying through the air, and Bjelica had to scramble on his knees to retrieve them all. I was absolutely elated! At times, I truly admired Garry Kasparov. I looked at him and said, ''Bravo!'' He smiled gleefully too. Apparently Bjelica had crossed him as well'.

There are numerous percipient observations on the big stage of top-level chess. For example, it is pointed out that Karpov never had to play outside of Russia on the route to his first World Championship title and the surprising note that Fischer never defeated a reigning World Champion in any encounter prior to the 1972 match with Spassky. 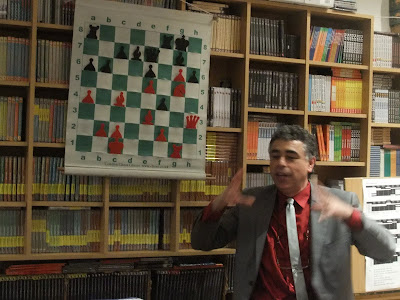 Every available game with the champions is included, with the annotation varying in depth. Four or five pages is quite a typical amount of space, and the game against Kasparov at Skelleftea in 1989 runs to just under 21 pages. 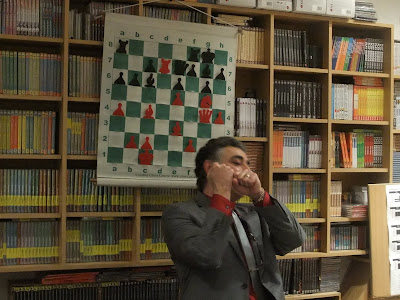 Demonstrating Spassky's caveman approach to attacking play
- hit them with a big club!

Each chapter concludes with a summary of Yasser's scores against the greats. Some of these are surprising, such as his mighty +4, =1, -0 against Tal. The single draw came in their last ever game together. 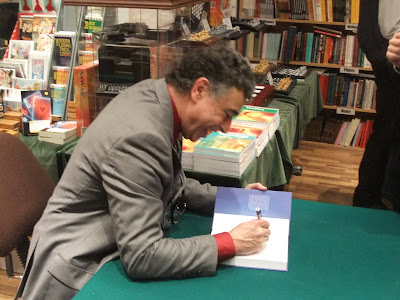 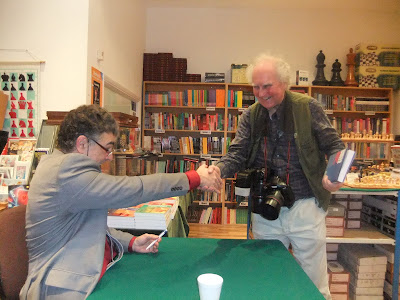 This is definitely one of the best chess books of 2010 and it will be enjoyed by chess fans who would like to learn a lot more about top-level chess from a player who was in the thick of the action for 25 years.

It's a simply wonderful collection of material, written in Yasser's inimitable style. In our interview, I pushed him on the question of a sequel, dealing with his games against the likes of Korchnoy, Timman and Larsen. He was reluctant, but perhaps a sackful of demanding mail directed to Everyman Chess will help change his mind. 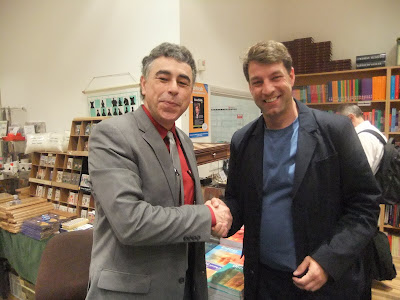