Ray Davies at The Sage 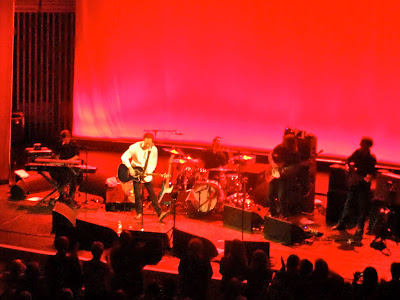 It's been a long time since I last saw Ray Davies, complete with The Kinks, in concert. In fact, it was in Redcar on 18 November 1994. I was surprised to see that he was coming to The Sage and was pleased to be able to snap up a couple of tickets.
Ray came onto the stage with Bill Shanley - who would provide lead guitar throughout the show - and started the evening with 'This Is Where I Belong'.
The first hour or so was a laid back accoustic affair. Ray broke up the songs with little stories about his life and the development of The Kinks (although he said he should fine himself everytime he mentioned 'the K word'). favourites from the K-catalogue included 'I Need You', 'Where Have All The Good Times Gone', 'Tired Of Waiting For You' and 'Sunny Afternoon'. More recent solo work appeared too, such as 'Morphine Song', written while he was dosed up in hospital recovering from being shot by a mugger.
Audience participation - in the form of a sing-along - was encouraged from the second song onwards. All well and good, but I would have preferred Ray doing all of the vocal work rather than sharing the honours - virtually 50/50 in the case of the more popular hits - and there were times when I felt he wasn't taking his own back catalogue particularly seriously. This effect was embellished when he announced he was going to sing the second half of one of the songs in a Johnny Cash style of voice. 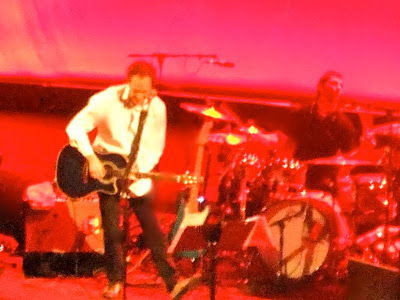 The first half of the show came a close as Ray read an extract from his semi-autobiographical book, 'X-Ray'. This lead to the start of '20th Century Man' as the rest of the band arrived to join in. Damon Wilson (drums - Keith Moon style!), former Kink Ian Gibbons (keyboards) and Dick Nolan (bass). This was a very energtic rendition and, for me, the highlight of the show. The nadir came shortly afterwards, with a shouted version of 'The Hard Way' which felt out of place and rather highlighted a lack of flexibility in the vocal department.
The rest of the show was a good mixture of more Kinks classics and solo material (centred around the 'Working Man's Cafe' CD). Curiously, we got 'All Day And All Of The Night' but not 'You Really Got Me'. 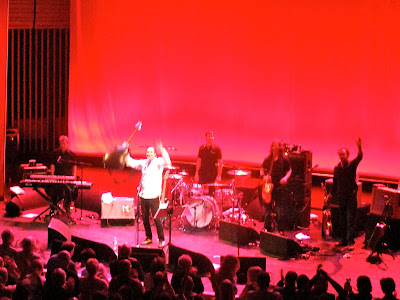 The encore consisted of 'Imaginary Man' and 'Lola', both of which were well received. 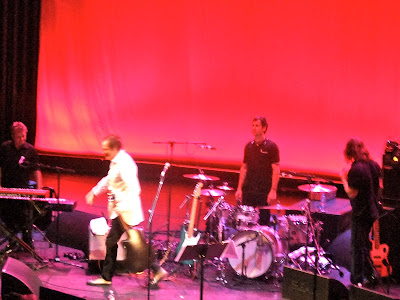 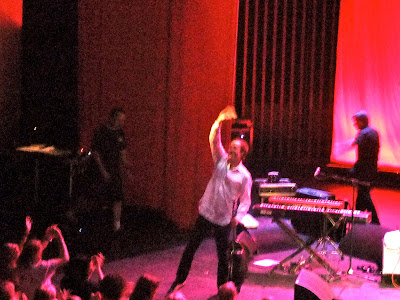 Photos were outlawed during the show but I grabbed a small number of shots right at the end. 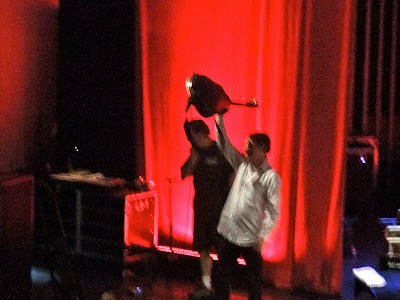 It was an enjoyable evening and a good show but I was left with a nagging feeling that it should have been even better.
Posted by Sean Marsh at 00:18

Yes i have seen loads of Kinks and Rays concerts but this one left me feeling well not too sure.Missing were Days,YRGM,and Dead end street.I agree with you on the back catalogue and 20th century man was the highlight oh yes and Keith Moon on drums.I thought the acoustic was too long I need you was never ever meant to be an acoustic song would have loved to have heard that on full throttle good review thanks.

Sounds like he was going through the motions really. Is this the end of the tour maybe?
Glad you had some fun :) I remember the Redcar concert well!

Thank you for your comments.

Girlorchid, this was the start of a 17-date UK/Ireland tour. Encouraging a sing-along from very early on runs the risk of turning a show into self-parody. Plus, there's a huge body of 1970s/80s and even 90s work buried deep under the 'obligatory' songs. It would have been great to hear more than a couple of them unearth themselves.

Despite the smattering of newer songs, Ray Davies has been coasting for the last 15 years. The recitals from "X-Ray?" He was doing that in the mid 90's. It's gotten old hat. The singalongaRay elements? No thanks. I go to gigs to listen to the performer, not the audience singing along, and Davies is a prime culprit for relying on this tactic. His band is overbloated - too many musicians when just 4 could make a better racket as The Kinks used to.

His joke about fining himself everytime he says the K word is pathetic. Ever since The Kinks split he's done nothing but coast and rely on The Kinks glories to ever decreasing and depressing effect.

At least he didn't have that choir with him. Words almost fail me when I think about the choir. It simply doesn't work- the arrangements are lame and end up being mere singalongaRay affairs. His last album ended up being the first Ray Davies associated album I passed on because the tracks I did hear depressed me since once again he just kicked the corpse of The Kinks to zero effect.

I've seen his show a couple of times over the years and saw The Kinks in 1993. Guess which show I enjoyed the most... yep, the 1993 one. Reading your review suggests it's business as usual for Ray and I'm afraid I won't be bothering to see this show since it would just end up annoying me since he could do way better than constant rehashings of comfortable formulas.

It saddens me to make comments like this because I think Ray is a Genius in so many ways and I love his heritage, but I'm sick and tired of him treating that heritage in this casual, almost flippant manner. I know he's getting on a bit, but the man has a rich fertile imagination and was a brilliant live performer. I just know he can do far far better than this.