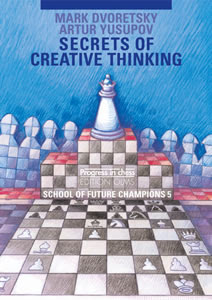 ‘The final volume of the series deals with various creative aspects, such as the calculation of variations and the development of intuition. It also explores the psychology of taking decisions, both when attacking and when defending.’

It is worth pointing out that each volume in the series works just as well as stand alone tomes and do not need to be read in sequence.

The material is split into the following parts:

The Calculation of Variations

Practical Expediency in the Taking of Decisions

Analysis of a Game

Creative Achievements of Pupils from the School

Index of Players and Analysts

The bulk of the material features games from a 10 year period between the mid-80s and mid-90s. Consequently, some comments now appear somewhat dated. For example, top Grandmasters have become far more universal in their styles of play, so this note now comes across as stereotypical.

‘It is extremely rare to come across chess players with a universal style, who perform with identical success in any type of position. One such player was Bobby Fischer, and - in his best years - Boris Spassky.’

Nevertheless, the subject matter remains as inspirational and thought provoking as ever. Students who are prepared to work hard at their chess will be rewarded if they apply themselves to the material (and that goes for all Dvoretsky books). Lesser experienced players will still find areas of interest but run the risk of straying out of their depth.

He recommends various training methods to develop intuition, including allowing 20-25 minutes on the clock to solve a series of five exercises. On incorrect solution results in one third of the initial thinking time being taken away. The aim of this training is to solve all of the problems without losing on time.

Here’s one position from a series given in the book. Imagine the clock ticking away as you try to find the solution. No clues are allowed! 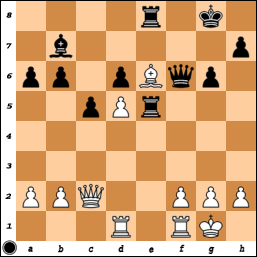 Black to play
There are plenty of other exercises to test the developing skills of readers. Some of them are very tough and are best tackled with the help of coach or study partner.

In the section, ‘What Lies Behind a Mistake?’ (in the chapter on ‘Defence’), Dvoretsky confidently identifies a major weakness in the games of former world champion Garry Kasparov - his desire for active defence at all costs.

‘In many cases it is active defence which promises the best chances of success, but this is by no means always the case. Any one-sided approach is bad. Sometimes you should calmly parry the opponent’s threats, patiently, and accurately solving the problems which arise. A lack of flexibility in his choice of playing methods makes a player vulnerable.

It is interesting that in his match against Anand (New York 1995) Kasparov several times chose the tactics of active defence in situations where they were completely inappropriate (true, in the second half of the event Anand was demoralised and he was unable to punish his opponent for this).’

His analysis is mainly based on games from the final of the 1995 World Championship. 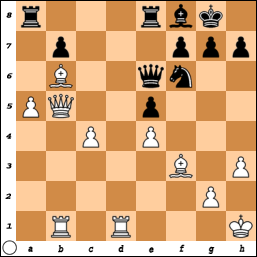 ‘Kasparov nevertheless takes the rook. Why? I see the explanation as being that he himself was hoping to obtain some activity. The queen aims at the rook, and also at the c2- and d3-squares; he has the active move …e5-e4, attacking the bishop…Alas, this is all an illusion - the strategic pluses of White’s position are far more important.’

Dvoretsky recommends 28...h5!? instead, intending 28 Bc7 Qe7! after which ‘…Black’s position would have remained unpleasant, but by no means lost’.

‘The moral to be drawn from these examples (the list of them could have been extended) is obvious. For a player of any standard it is important to make a thorough analysis of his own games, and disclose the latent, deep causes of the mistakes he has made, as this always serves as the first step towards their elimination.’

‘Creative Achievements of Pupils from the School’ is a standard feature in Dvoretsky/Yusupov books. I usually find it the least interesting section but one particularly striking mating attack caught my eye. 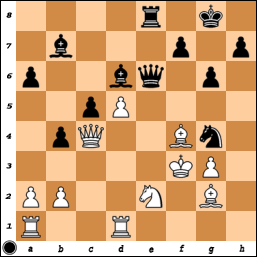 Production-wise, the book enjoys the usual high standards we have come to expect from Olms. That means a crisp and clear layout, high quality paper and a sturdy spine that won’t bend unless absolutely excessive force is applied.

Novices need to look elsewhere; diligent students would derive the most enjoyment and benefit from the depth of this book. As usual after studying Dvoretsky, readers will soon be thinking about chess positions in a completely different way.

What is the difference between this book and the older "Attack and Defense?" Is there anything new that an owner of the previous book would want?

I think the only change is a general tidy up. There's no need to upgrade from the old version apart from the smarter and tidier appearance.