Winning Chess Middlegames
By GM Ivan Sokolov
286 pages New in Chess
‘Ever wondered why grandmasters take only seconds to see what’s really going on in a chess position? It’s all about structures, as Ivan Sokolov explains in this groundbreaking book.’

Following a foreword by GM Michael Adams, who praises ‘…the fruits of (Sokolov’s) labour’, ‘…which are invaluable tools for any player’, the author introduces his work and explains his aims and ideas.

‘…I have tried, as much as possible, to: 1. Systemize the thematic plans used and give clear explanations of them, and 2. Incorporate the ideas of the featured opening variation into the pawn structure that ensues.'

The main body of work revolves around four main chapters, each covering, in depth, a different kind of pawn structure. The chapters start with listings of the essential structures and some basic comments, before moving on to the deeply annotated illustrative games (each game takes, on average, between six and eight pages).

The Nimzo-Indian is the key focus of attention for the first chapter, and the Saemisch structure in particular comes under considerable scrutiny.

Naturally, one of Black’s plans is to apply pressure to the doubled c-pawns. GM Sokolov tells of a game in which he struggled, as Black, after winning the c3 pawn. He quotes an observation by GM Ljubojevic:
‘The pawn on c4 is always worth taking, because you threaten to exchange the light-squared bishops and at the same time the a1-h8 diagonal remains closed for the dark-squared one. Taking the pawn on c3 only opens the diagonal and helps White.’ 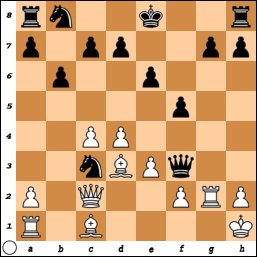 Keres - Spassky
Candidates Match 1965
‘14 Ba3! Rejecting the draw that would result from 14 Qxc3 Qd1+ 15 Rg1 Qf3+. Keres correctly judges that with all his pieces active and diagonals and files open, his initiative is worth more than two pawns.’ 1-0 (25)

The Tarrasch Defence is one of the main openings covered in this chapter. The timing of pushing the isolated pawn is one of the aspects discussed in great depth.

Tartakower’s variation of the Queen’s Gambit Declined is a repertoire cornerstone of many great players. Black often accepts hanging pawns to create dynamic chances so it should come as no surprise that Tartakower has a starring role in this chapter, which sheds a lot of light on games by Karpov, Short and Kasparov.

The Semi-Tarrasch and Queen’s Indian Defence fall under the spotlight in the final chapter. It’s 30 years since Kasparov first crushed numerous top players with the quiet-looking move 4. a3.

The selected game features a real battle of the generations. 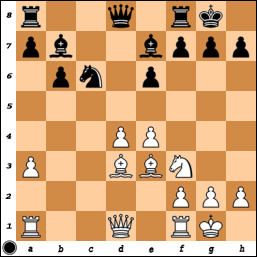 Kasparov - Najdorf
Bugojno 1982
The author’s comments on this typical position are very instructive and a good example of what one can expect throughout the book:

‘A good moment to take stock and compare this position to the previous Semi-Tarrasch game. The pawn structure is the same, but the difference is that here the dark-squared bishops are still on the board.

In my opinion, in general this should be favourable for White, since:

- Black has considerably less space to manoeuvre his pieces; - Black queen sorties (to f6) are not possible;

- In the case of a central pawn blockade (after d4-d5 and e6-e5), it is, in general, positive for White to have the dark-squared bishops on the board. Should a black pawn appear on h6, White may get sacrificial motifs with Bxh6 and, in general, in many lines White simply has one more piece for his kingside attack.

The plus for Black- perhaps the only one - is the fact that the ...f7-f5 idea, to undermine White’s pawn centre and take control of the d5-square, is much easier to execute with the dark-squared bishops still present.’

As can be seen, the closed openings dominate the book but the structural considerations will of course crop up frequently in other openings too.

This is a deep book which will suit experienced players. Hard work and serious study will be both be essential to gain the most benefit from it but readers will definitely develop a much better understanding of the main pawn structures and will learn to adopt the various strategies in their own games.

GM Sokolov’s lucid explanations are extremely informative and convey a large amount of genuine Grandmasterly wisdom. This is easily one of the best middlegame books of recent times.

This is the third English edition of GM Timman’s annotated account of the ‘Match of the Century’. The first two articles are new to the book but were printed in New in Chess magazine.

GM Garry Kasparov provides four pages, covering some general points about Fischer and highlighting the influence on his own game.

GM Timman’s 10-page memorial piece includes an account of his meeting with Fischer in 1990.

GM Max Euwe provides the background to the match in 19 pages, concluding with the remark:
‘As I left Reykjavik, I was quite happy to leave chief arbiter Lothar Schmid in charge of the proceedings. He was not only amply qualified, but during the past few days he had revealed himself as a competent, diplomatic and utterly objective assistant.’

One senses Euwe’s relief too.

A Brief Sketch of the Course of the Match

The author gives a little overview of the battle before moving on to the fully annotated games.

‘…I was amazed to find that the first nine games are totally devoid of the whole idea of fighting chess. It is only afterwards that a surplus of fighting spirit comes to the fore. Maybe this unexpected development was the result of the turbulent imbroglios at the beginning.’

The games should be well known to all fans of chess. GM Timman captures all the critical and confusing moments, such as the infamous 29...Bxh2, Spassky’s amazing blunders in the first half of the match and Fischer’s ‘hit and run’ strategy with Black in the second half, as he ducked and weaved his way to victory.

GM Timman is first-class annotator of chess games. Those given here are mainly authentic 1972 versions, but there are one or two updates, mainly stemming form GM Kasparov.

Here’s a couple of snippets to give a flavour of the general style: 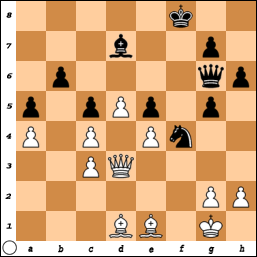 ‘A blunder. It clearly wasn’t Spassky’s day. After the correct 27 Qb1 Black will not find it easy to convert his advantage. The positional threat is 28 g4 Nh3+ (if the knight retreats to h5, White will swap, of course) 29 Kg2 g4 30 Bd2!, and in the long run Black cannot avoid the exchange of his knight against a bishop, which makes the win very problematic. So Black’s strongest move is 27...g4, when White’s situation becomes precarious. Black’s king can walk to c7, but White can often parry subsequent attacks against his weak pawns by regrouping. I will have to leave the question of whether the position is still drawn or just for Black, unresolved.’ 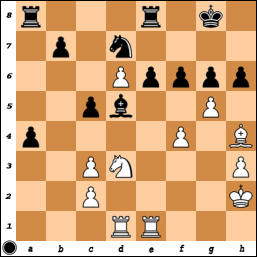 ‘32...hxg5? Personally, I regard this as one of the most amazing mistakes of the entire match. Although it does not spoil the win, it should nevertheless be considered a positional blunder. As Smyslov indicates, Black should first have sidetracked the knight with 32...c4. After 33 Nb4 hxg5 34 fxg5 f5 White has nothing better than 35 Nxd5 (else 35...Be4!) 35...exd5. The bishop on h4 is so bad that there is little White can do against the a-pawn.’

The photo gallery, covering nine pages, is a very welcome addition. Spassky looks worried in most of the photos; Fischer appears to be completely focussed, relaxing only for the last two snaps, with show that he: ‘…let himself be tempted to a few dances with some local beauties’.

The book concludes with an Index of Openings followed by a short piece on Earlier Encounters. This gives the moves of the five pre-1972 encounters (unannotated bar a couple of brief suggested moves).

This book, staying true to the spirit of 1972 and rarely going into what came afterwards, serves as a fitting memorial to the 11th World Champion.

Missed a review? Please visit my archive:
http://marshtowers.blogspot.com/2007/12/chess-review-archive.html
Posted by Sean Marsh at 00:32

Hi,
first of all, congratulations for your interesting blog.
The feed of your blog was inserted successfully in the english
library of YourChess portal http://www.yourchess.net and
it will remain in home page for several days too.

We are very pleased to have (if it's possible) a crosslink
inserted in your blog site.