100 Endgames You Must Know
By GM Jesus de la Villa
New in Chess
There’s a very good introduction (a standard theme with New in Chess books) which goes into detail about why endgame study is required and how the author came to write the book. The curse of the modern time controls is highlighted.
The aim of the book is revealed in the following snippet.
‘As stated in the title, my intention was to include only ‘the endings we all should know’. The reader may well wonder: which ones? The answer may be controversial, but these were the criteria used, in order of importance:
To be frequently encountered in practice
To be capable of clear analysis (and therefore, easier to remember)
To contain ideas that can be applied to similar, or even more `complex, positions
Thus this book was not intended as an encyclopaedia, dealing with all known endings and used as a reference book, but as a practical tool which allows the reader to improve his knowledge of the theoretical endgames most likely to arise in an actual game.’
There’s so much material packed into the 240 pages that it’s hard to believe there are ‘just’ 100 main endgames.
The material is well chosen and the presentation is excellent.
Things start off with one of the very basics of King and Pawn endings: ‘The Rule of the Square’. 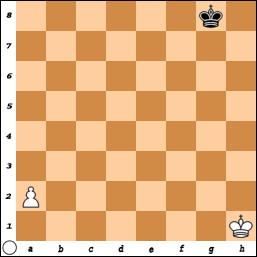 White to move
Can the pawn promote without the aid of the King?
All of the standard endgame categories are covered in detail. The final chapter looks at ‘Other Material Relations’ and contains analysis of Checkmate with Bishop and Knight against lone King, Rook and Bishop against Rook, Rook and pawn v Bishop, Queen against Rook and pawn.
Even though things start off with basic examples, a lot of the material in this book would challenge club players, particularly in the last chapter when the material imbalances can be very disorientating. 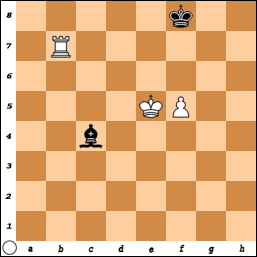 For example, it seems unlikely but once White plays 1 f6? here he can no longer force a win.
As the book says:
'Now Black can draw relatively comfortably, just by following this rule: ‘The Bishop must stay along the a2-g8 diagonal, avoiding g8 and f7 squares and thus being able to deliver a check if the White King moves to g6’
This is the greatest strength of the book: breaking things down into well-worded chunks of easily digestible information.
Here’s a couple of the tests for you to think about and to provide a gauge of the standard of material. 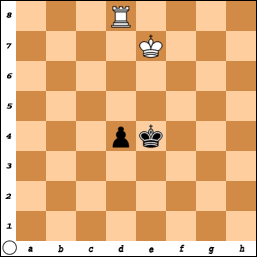 White to move
What should you play and with which result? 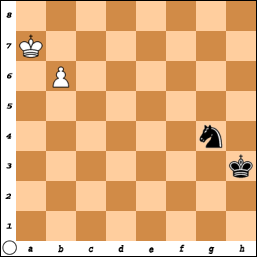 White to move.
What is the correct result?

The Chebanenko Slav
According to Bologan
By GM Victor Bologan
New in Chess
GM Shirov provieds a very good foreword, telling a little bit about the late Vyacheslav Chebanenko and how they came to meet. ‘Play 4...a6 in the Slav! I used to think it was a loss of tempo but it is not!’ 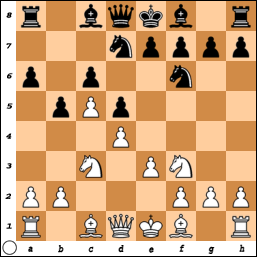 The starting position of the Chebanenko Slav
(After 1 d4 d5 2 c4 c6 3 Nf3 Nf6 4 Nc3 a6)
GM Bologan follows up with an excellent 18-page introduction, covering the history of 4...a6 as well as providing an intriguing portrait of the eponymous Chebanenko, augmented by a number of photographs.
Extracts are included from other sources, including ‘Revolution in the 70s’ by GM Kasparov.
The main body of the 238 quite naturally presents a detailed coverage of the opening itself and is split into five main parts:
Various Replies on Move 5
Inserting 5 a4 e6
The Insidious 5 Ne5
The Solid 5 e3
The Strategic 5 c5
Theory has certainly grown very quickly for this opening and both sides have numerous choices early in the game. For example, in this position… 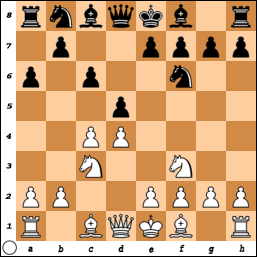 …there are no less than seven established continuations for White.
34 Practical Examples are provided, in test format, to further the reader’s understanding. As with the rest of the book, the ideas are relevant to White and Black; this is by no means written (as some books are) to try and ‘prove’ that the opening in question is virtually a forced win.
There’s a comprehensive index of variations at the end, along with another for players’ names.
A bibliography would have been very useful. Some publications are mentioned in passing but GM Flear’s book on the variation is erroneously given a publication date of 1983 (instead of 2003. His earlier book, 'The Slav for the Tournament Player', came out in 1988).
This book provides a full coverage of the trendy 4...a6. To make the most of the material would require a fair bit of hard work from the reader; it’s a comprehensive guide but aimed at experienced players rather than Slav beginners.

The Flexible French
GM Viktor Moskalenko
New in Chess
I’ve not played either side of the Slav very much so a large amount of the territory covered in GM Bologan’s book was new to me. However, I have considerable experience of may variations of the French Defence so I was intrigued to see if there would be anything particularly eye-catching in GM Moskalenko’s new volume.

In fact it was clear from the very start that there were plenty of surprises and a plethora of original analysis in all of the main variations of the French. The suggestions are not confined to boosting Black’s armoury; ideas for the first player are included too.

Great photographs of influential adherents of the French Defence, plus the occasional picture of a classical French army in action and a rather surprising one to accompany the Winawer Variation!

The basic breakdown of material:

Each part is presented according to the format:
'Historic origin of each variation
Main ideas, resources, advices
Analysis of the most interesting lines through model games
Illustrative games
Statistics, summaries and conclusions'
A final chapter, ‘Seven Samurai Swords’, looks at surprise weapons for both colours.
The giants of the French Defence make plenty of appearances throughout the book and the author makes the point that most of their ideas still hold up to today's critical scrutiny.

'I doubt whether the authors of books like ‘Beating the French Defence’ (and other good defences) could actually defeated heroes such as Petrosian, Korchnoi or Botvinnik. The value of their ideas will be retained for as long as our game is played!'
This book does not contain a full repertoire for Black - there are sidelines that receive no coverage - but used in conjunction with (for example) one of John Watson’s classic tomes then the reader’s repertoire options will be expanded and enhanced.
White is not forgotten; considerable attention is paid to the variation:
1 e4 e6 2 d4 d5 3 Nc3 Nf6 4 e5 Nfd7 5 Nf3 c5 6 dxc5 Nc6 7 Bf4 Bxc5 8 Bd3 f6 9 exf6 Nxf6 10 Qe2!? 0-0 11 0-0-0 (it’s possible to reach this via the Two Knights Variation also) 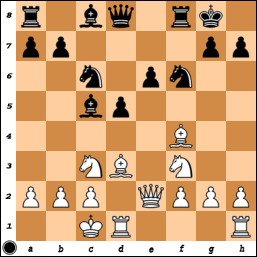 Players looking for something interesting to play with White should find some decent ammunition here - and players with Black will need to read this too, to be prepared!

The Samurai Swords see action in the gambit variation 1 e4 e6 2 Nf3 d5 3 e5 c5 4 b4, the King’s Indian Attack, The Exchange Variation, The Winawer, the Classical Variation. The coverage here is shorter than in the main sections (3-4 pages) but they should inspire further reading. The swords can be sharp; for example, Black is given some pointers on how to fend off the Alekhine-Chatard Attack 1 e4 e6 2 d4 d5 3 Nc3 Nf6 4 Bg5 Be7 5 e5 Nfd7 6 h4 with the controversial 6...0-0, ‘Weathering the Storm’. 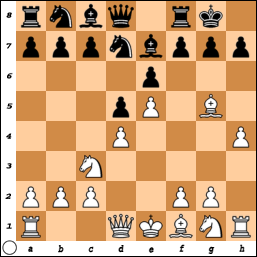 GM Moskalenko certainly likes to practice what he preaches and there are numerous examples if play from his own experience. There are games of his against the Grandmasterly likes of Morozevich, Ivanchuk and Sveshnikov.

It’s extremely well written and the reader’s enthusiasm for the French Defence in general - and the featured lines in particular - will have been greatly enhanced. Accessible and inspirational, this is a book every 1...e6 player should have at the top of their shopping list.

Missed a review? Pop along to my archive:
http://marshtowers.blogspot.com/2007/12/chess-review-archive.html
Posted by Sean Marsh at 03:02