I selected this particular DVD to review as I was intrigued to see how life on Planet Shirov would treat the ultra-solid Slav Defence.
13 games are presented; GM Shirov is seven Black in seven of them but clearly has made great contributions to the theory for both colours.
The first three games cover the very normal Slav resulting from: 1 d4 d5 2 c4 c6 3 Nf3 Nf6 4 Nc3 dxc4 5 a4
Of particular interest is an exhibition game against the computer program Shredder. GM Shirov freely admits that Shredder wasn’t as strong then (2001) as it is now and that it wasn’t running to it’s full capacity at the time. The commentary outlines, very clearly, the correct strategy in one of the most popular main lines. 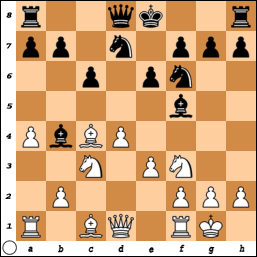 The ins and outs of this famous position are discussed in depth.

Once Black had equalised the position Shredder came up with a surprise, allowing Black a strong tactical blow. 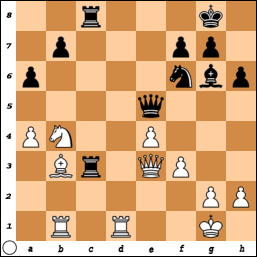 Shredder played 27 Qb6 (27 Nd3 is better) and GM Shirov, despite being worried that the computer had seen something that he had not, found the confidence to play 27...Bxe4! 28 fxe4 Ng4 with a very strong attack. The computer struggled into a Knight endgame. 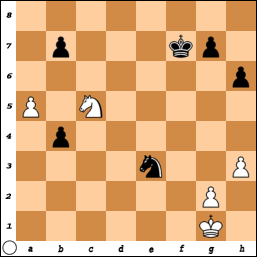 GM Shirov comments here that Black would win easily after 39 Nxb7 b3 but then after looking at the further moves 40 Nd6+ Ke6 41 Ne4 he suddenly taken aback; Black’s task is somewhat trickier than first suggestions indicate. Thinking on the spot, he eventually comes up with a winning plan.

It’s fascinating to (almost) see his mind at work as he thinks through the various moves and ideas. This leads to another interesting comment: playing a winning endgame is easier against strong computers as they tend to avoid lines they know will eventually lose, whereas humans could merrily play 39 Nxb7 and maybe even have a chance of surviving if the opponent’s technique is faulty.

In the game, Shredder opted for 39 Kf2 but lost after ten more moves.

GM Shirov concludes that particular game by admitting that his wins against computers are - by far - outnumbered by the number of losses. His comments came shortly before the last Kramnik v Fritz match, which he (correctly) predicted the computer would win.

Coverage of the standard Slav is completed by two further games, one featuring Black's trendy ...a6 lines and the other with 4 e3 for White.

The Semi-Slav sections of the DVD were recorded several months after the regular Slav pieces. Anyone who has read ‘Fire on Board’ will know that GM Shirov’s name is strongly linked with the Botvinnik Variation, even though he claims on this DVD that it now belongs to chess history; indeed, he believes that Black’s ambitious is virtually refuted and that Black should prefer the Moscow Variation.

The illustrative game against GM Ponomariov lasts no less than 53 minutes. It’s all time well-spent; there is, of course, a huge amount to discuss and he does an excellent job of guiding the viewer through all the options and tactical minefields.

As this famous position from the game shows, a guide is definitely needed! 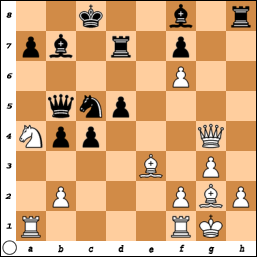 White played 21 Qg7 here!
The Moscow Variation and the Cambridge Springs are also covered before the attention switches to the Meran System. Only one variation is analysed (don’t forget - this is ‘Best Games’ and not ‘Comprehensive Coverage’) and it’s another Planet Shirov trademark. 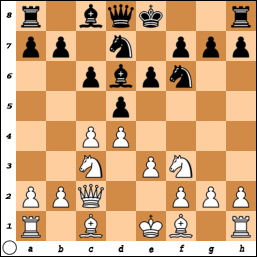 He gives a full history of the genesis of 7 g4 and over the course of three dramatic games he brings the story fully up to date.
It's quite astonishing how GM Shirov can impose his style and personality over one of the most solid openings. His games with the Slav prove to be just as inspirational and exciting as those in the officially sharper openings. Just sit back and enjoy! (Don't be fooled by the back cover though, which shows positions from the Caro-Kann DVD).

As a polar opposite of the above DVD, I was equally interested to see how such a ‘correct’ chess player as former World Champion GM Kasimdzhanov would present the Albin. It has never enjoyed an awful lot of respectability. 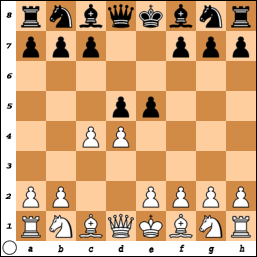 Over the course of the 24 illustrative games, GM Kasimdzhanov presents a master class of the whole opening and explains how he came to add it - very successfully - to his own repertoire (he needed something to put into battle against the ultra-solid GM Jussupow).

He goes as far to say that he considers 2..e5 to be the only way to fight for the initiative after 2 c4 . This struck me as a very interesting comment and after some reflection I realised it is absolutely true. Once White plays 3 dxe5, Black makes a bid for a long-term intitiative with the space-gaining 3...d4. This spacial advantage provides the basis for rapid and virtually uninhibited development.

First game of historical importance, Lasker v Albin New York 1893 (which the Second World Champion still managed to win despite being the intended victim of a brand new weapon) is one of a number of games from a bygone age. Lasker later played the Black side, famously springing that trap (you know the one...fxg1=N+ is a big clue if not!).

This is followed by a detailed 'Theory' section, which is very useful. After all, the majority of viewers will probably have never analysed the Albin at all. All sensible alternatives to the main line are analysed, with 3 e3, 3 Nf3 and 3 Nc3 all going under the microscope (conclusion: fine for Black, so if White is afraid of your mainline preparaton he has nowhere to run).

An interesting series of games from throughout the history of chess are presented to show not only the typical plans and common tactics, but also to show how the Albin Countergambit has evolved. The main emphasis is on modern lines with …Nge7, leading to an attempt to round up the e5 pawn with …Ng6, as used by GM Morozevich to terrific effect. 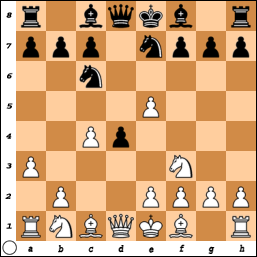 It does look like White has an easy task of rounding up the bold d4 pawn but it’s not that simple; after a straight forward attempt the justification of Black’s set-up becomes apparent: 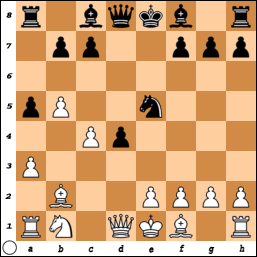 The c-pawn hangs and Black is fine. More than that, players with White will be thrown back onto their own resources and Black will be on very familiar ground, armed with the expert knowledge provided by GM Kasimdzhanov.

The more traditional tries for Black, featuring …Be6, …Qd7 and …0-0-0 with a Kingside attack, are covered towards the end of the DVD.

The strength of the White players who really struggled against the Albin is staggering. On this DVD, we see games with the likes Topalov, Gelfand and Karpov (only Karpov earned as much as a draw). To conclude this review, here’s another very strong 1 d4 player suffering against a text-book Albin onslaught. If Super-GMs can’t keep the lid on the tactics, will your opponents at club and tournament level do any better? 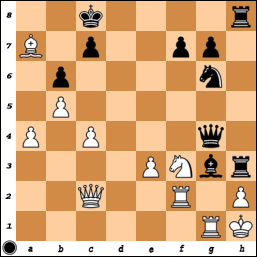 This really is expert coverage of an opening which could serve you very well in your own games. You'll be virtually guaranteed to know more about it than your opponents and in some games that could be enough to obtain a winning position with little effort.

In a former DVD ('Strategy Step-by-Step'; see review column 47), GM Kasimdzhanov mentioned follow-up volume was due out soon. This is it and it takes a good look at strategy in endgames.

In his introduction, the presenter discusses his criteria for the selection of material. The games are all from his own practice (as they are the ones he understands the best of all) and feature a number of examples demonstating such cornerstones of chess strategy such as the richness of ideas, the realisation of a small material advantage, saving the game a pawn down, King activity and the power of the two Bishops.

17 endgames are examined in all, often with the analysis starting with the initial moves of the game to show the connection of the endgame to the opening rather than just to dive into an existing, out-of-context endgame position.

The endgame positions are of varying degrees of difficulty. I know from my own playing experience that there is sometimes a reluctance to enter an ending in which the advantage seems too slight. It was particularly instructive to see GM Kasimdzhanov at work in this ending: 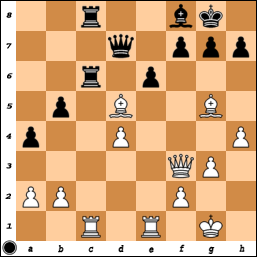 This is precisely the sort of ending that gets misjudged so often in club and tournament chess. Black has to decide how and what to trade. For winning purposes, I’m sure I’m not alone in being reluctant to swap off too much, fearing the advantage would be too small.

However, the intuition of the Grandmaster came into play and after a series of exchanges this next position was reached: 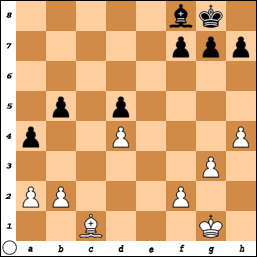 The various problems of White's position are discussed in great detail. For example, the majority of his pawns on same colour as Bishop, giving it very limited scope.

White's White squares are weakened as he cannot easily control them; this opens up the schematic plan for Black's King to advance to e4 via f7, e6 and f5.

The isolated d4 pawn might become a target for Black's King and Bishop.


These all add up to Black deciding he had enough to go on as he tried to pushed for a win.

White’s task not at all easy and he will feel the pressure. He needs to put most of his pawns on White but it’s not clear where to start. 29 h5 is recommended as after 29 b3 h5! The pawns are fixed and ultimately vulnerable.

Fast forward a few more moves and it’s easy to see how Black’s plans have come to fruition. After 41...Bb2 the game was effectively over. 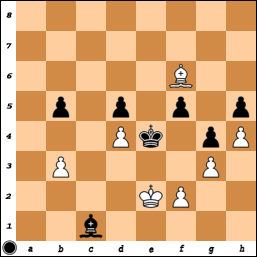 Of the many highlights, I was particularly impressed with the explanations of the strategical ideas resulting from a World Championship game. 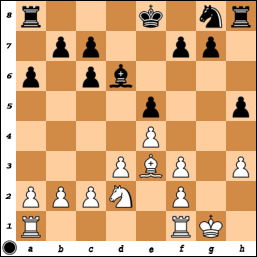 This position occurred in the final of the 2004 FIDE World Championship. Clearly, it has arisen from an Exchange Variation of the Spanish Game. The basics of the position are nicely broken down and the various possible strategies - for both sides - are given full consideration.

It may seem strange to the naked eye, but White proceeded to launch an attack on the Queenside with a quick Rfb1 and b2-b4. The subsequent play is split over three video presentations and is extremely instructive.

The material is excellently chosen; each example conveys a large amount of common-sense chess wisdom to the viewer.

Summing up some of the main points in the short ‘Outro’, GM Kasimdzhanov strongly hints that there will be more DVDs on chess strategy to come. Let's hope so; the first two volumes are excellent and I’m sure I’m not the only viewer hungry for more.

For further details of all Chessbase products, please visit:
http://www.chessbase.com/

For the archive of my chess reviews, please see here:
http://marshtowers.blogspot.com/2007/12/chess-review-archive.html

...and here, for a game of my own with the Albin in an important County Championship encounter: http://marshtowers.blogspot.com/2004/05/archive-uncut-30.html