The Afterlife is a funny old place, and you never know who will turn up….

Tinkling away on the piano was Alexander Litvinenko, with his own rendition of ‘If you knew sushi like I knew sushi…’

Elsewhere, General Pinochet was asking after Fidel Castro and was told he had been indefinitely delayed.

There, in the corner, sat a couple a chess players, completely engrossed in a position they were analysing. The one with the aristocratic air and immaculate appearance politely beckoned me over. The second player never looked up and didn’t even seem to know I was there. ‘Senor Capablanca!’ he suddenly snapped, ‘I think I have the solution!’ A lonely-looking man at another table gave a cursory glance but made no attempt to come over and join in. Capablanca smiled at me and then looked down at the board. He then gave a rather camp giggle. ‘Sorry Dr Alekhine, but that is quite incorrect!’

Something suddenly occurred to me. ‘Just a minute…aren’t you two supposed to be mortal enemies?’

The Cuban smiled again. ‘Mortal enemies yes…but one simply has to put aside past differences at such times.’ Alekhine suddenly shot a glance upwards and I was taken aback by the ferocity of his magnificent glare. ‘Because everyone else up here is a patzer! How else can we play chess against a worthy opponent other than to play each other constantly?’

Capablanca giggled again and told the old joke about Alekhine’s first appearance in heaven…. ‘He stood at the gates but they pretended for a while that he wasn’t allowed in. Why not? Because he was a chess player! And so he peeped through the gates and saw…Bogoljubov! But there has been some mistake! How come he is allowed in when I am not? That’s different, they explained…Bogo only thinks he is a chess player!’

At this, Alekhine shot another glance upwards, betraying his annoyance at the story and of his continued frustration at the chess problem.

‘Of course, I had to wait a few years for my former foe to appear’ said Capablanca. ‘Late as always!’

‘Not my fault!’ snapped Alekhine. ‘My doctor gave me six months to live, and I told him very well but I was too poor to pay his bill. Given that he was a – ‘

The lonely looking man on the nearby table made to get up, clearly intending to help with the problem, but something held him back and he sat down with a weary air of defeat.

‘What’s wrong with that man?’ I asked.

Alekhine looked up and his eyes darted across to the other table. He shrugged and simply said, ‘Ask him’, motioning towards Capablanca. The Cuban looked a little bit ill at ease for a while but politeness overtook him and his voice lowered considerably as he told me the tale…

‘It happened some time ago, in 1924 to be precise, when Dr Alekhine and I were competing in the New York tournament. That man came to my room one evening and asked to speak to me privately. I let him in and asked him to state his business. He said he had solved chess! An outrageous claim, or so I thought…at first, I laughed…and yet he seemed deadly serious. I thought I’d better humour him for a little while and then send him on his way. We found a set of pieces and he played over some moves to demonstrate his ideas.

I thought I’d lost concentration, for within 20 moves my position was absolutely lost! The man merely smiled and asked me to try again. Playing carefully, I allowed him another chance and I was again lost after 20 moves! No matter how hard I tried over the next few games, I couldn’t stave off inevitable defeat. Remarkable!

I summoned Dr Alekhine, for I could scarcely believe what I was experiencing. At first he laughed and called me a patzer. But soon he suffered the same fate! We worked together all night but would not get the better of our opponent. A crushing defeat in 20 moves, every single time! Chess had indeed been solved once and for all!’

‘Amazing! So what became of the man and his moves?’

Alekhine spoke up at last. Taking a cautionary look from side to side, he whispered ‘He was never seen again…he’s been here since that night in 1924….’

‘Anyway,’ interjected an embarrassed Capablanca, ‘Let’s try this problem again. It sound so simple; all we have to do is….’ 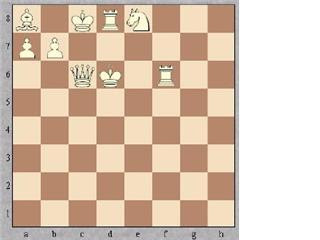 Decide which pieces should be White and Black
and then say what the last move was!

I looked at it for a while but could not fathom the solution. ‘But this isn’t real chess! Got any other problems for the readers to solve?’

Capablanca produced a sheet of problems like a rabbit from a hat. ‘But of course! Let them try these….’

And so, dear readers, here is a little festive challenge to you all. Answers next year!

It’s White to play and checkmate in three moves! 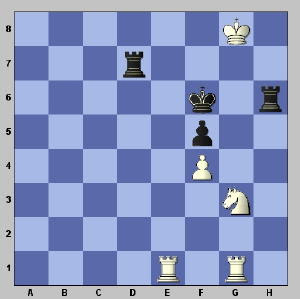 White to play and mate in six! 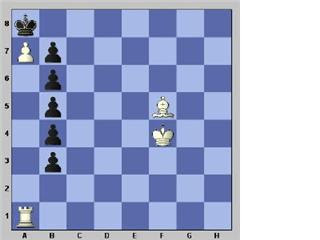 Too difficult, you say?

Then try the easiest ‘White to play and mate in six’ there is! 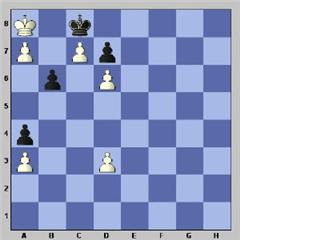