I hope you are all over the excesses of Christmas and New Year celebrations. Eaten too much? Who hasn’t…in the words of the Kaiser Chiefs, ‘I predict a diet, I predict a diet!’

2006 promises plenty of changes, not just in local chess. There’s plenty going on in the real world too, you know!

For example, it would seem that David ‘cheap as chips’ Dickinson has announced that he would quite like to take over as football manager of Sunderland. It’s because he’s had plenty of experience at getting a good tanning every week.

Apparently ‘Brokeback Mountain’ has become the ‘must see’ film for the start of the year. I’ve not seen it myself, but a reviewer picks out the scene in which the two cowboys rode into town and shot up the sheriff as being particularly well done.

And that reminds me; the new James Bond film will be shot sometime this year (and, with any luck, so will Gary Glitter…)

Meanwhile, to tidy up some unfinished business, here’s the answers to problems from the last two UNCUT! columns (visit the site archive for the relevant positions)


I was pleased indeed to receive several contributions in response to my appeal in UNCUT! 43, regarding the… 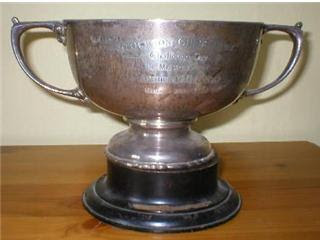 Some years ago during a club meeting in The Ladle there were three chauffeurs sitting in the bar. I knew one of them as he was driving the Mayor of Redcar. He introduced me to the other two as his man in chess; they were from Middlesbrough and Stockton.
The driver from Stockton said that just about a week before he had collected a chess trophy from Darlington where it had been found in a garden hedge, in perfect condition. It was held in the Mayor’s office in Stockton.
Since I was working for Stockton I called to see the Mayors Secretary who showed me the trophy. Obviously I confirmed that I knew some of the winners and that it was the club championship trophy from Stockton Chess Club which I recall meeting in Dovecot St and The New YMCA. I suggested that Elmwood would be the best place for the trophy to continue its life but legal department put a few restrictions which Elmwood did not accept so it remained in the cupboard a little longer.
After a few months I was summoned to the Mayor’s office to be handed the trophy for onward transmission to Elmwood.
Paul Gregory and Brian Smith were both members of Stockton when it folded but could not remember who had custody of trophies and books, they may perhaps recall the year.
Regards
Gerry Walsh 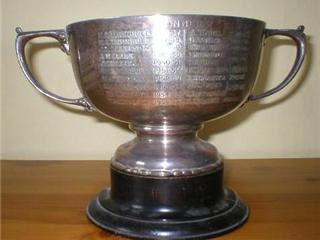 Paul Gregory had some memories of the event, as did Norman Stephenson and David Smith, who both provided games.

Ian Middleton played for Scotland in the 1956 Moscow Olympiad, scoring +1, =8, -4 David Smith tied for first place in the 1958-9 Stockton Championship, leading to a two-game play-off.
Norman opines that Ian Middleton dropped out of local chess once it became clear that the local heavies could handle him.