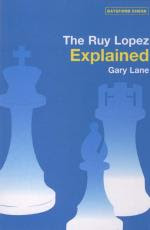 The Ruy Lopez (or Spanish Game) is one of the oldest respectable chess openings and one that has accrued a massive body of theory. There have been many books attempting to plumb the depths of its secrets and it remains the most critical test of Black’s classical 1 …e5 response to 1 e4. Ponziani described Lopez, the Spanish priest, as ‘…an unfruitful genius and devoid of enthusiasm’ yet the opening which bears his name has lived on over the centuries and is still the most popular try for an advantage.

Players at all levels appreciate this and that is undoubtedly the reason that so many currently scurry for safety under the rock of the Petroff Defence.

Is it possible to distil 500 years of practice and wisdom to provide a decent repertoire in just 160 pages? Not if you are looking for an encyclopaedic coverage of all the main lines but Gary Lane remains true to his style and attempts to ‘…find, wherever possible, lines that were ‘low maintenance’ and could be absorbed quickly’.

This means bypassing some of the really heavyweight lines and to this end Lane opts for 9 d4 against the dreaded Marshall Gambit and 9 d4 in the main line. 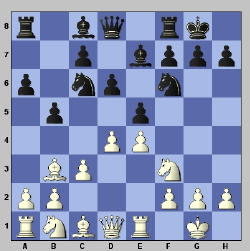 Getting by without 9 h3, this allowing Black the option of 9 …Bg4, cuts out the need to learn about the Breyer, Chigorin, Karpov, Zaitsev and Smyslov Variations. The main illustrative game is HYDRA - Adams - a crushing win for White. As Lane says, ‘…it is time to take note of exactly how the machine plays chess’.

4 d3 is his recommendation against the in-vogue Berlin Defence, which at least keeps the Queens on and prevents Black players from trotting out lots of Kramnik-style moves without having to pause for thought.

The minor lines are given decent treatment and it seems that White should be able to meet them all with confidence.

The Schliemann is a sharp club-player favourite and I remember my former club mates Tim Blake and Andrew Pridding having great successes with it. It seems that White is having most of the fun these days with the line: 1 e4 e5 2 Nf3 Nc6 3 Bb5 f5 4 d3 fxe4 5 dxe4 Nf6 6 0-0 Bc5 7 Qd3! 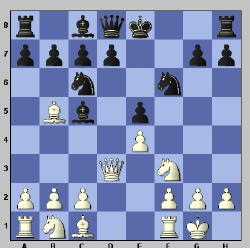 The Queen move looks odd but contains a plethora of evil plans, not least the trap of refuting 7 …0-0?? By 8 Bxc6 and Qc4+. In fact, the unlikely c4 square is the Queen’s normal destination in this line and the analysis in the book provides a very convincing argument in its favour .
The choice of illustrative is very sensible and steers clear of all the murky Kasparov-Karpov clashes, preferring instead to use lesser-known games which offer a much clearer snapshot of the essential strategies.

VERDICT: As a good a single-volume guide to the Ruy Lopez as I have seen. This is an excellent way to study the opening, devoid of all those endless sub-variations which make so many opening tomes thoroughly indigestible. As Lane’s books are always popular with club players, people defending the Black side of 1 e4 e5 should check out the lines given as I have a feeling you’ll soon be seeing them over the board. 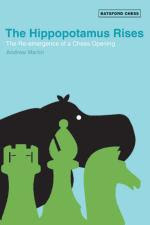 From one of the ultra-main bodies of theory to one of the least explored….
The Hippopotamus, with it’s trademark line up of pawns on the third rank (…g6, …e6,…d6...,…b6 and often ….a6 and …h6) has never been anywhere near as popular as the Hedgehog systems with which it has similar characteristics.

One reason is that the Hedgehogs are more often than not adopted when White is committed to an early c2-c4, giving Black an easy target for a timely break with …b5 and/or …d5. Anyone who remembers when GM Suba was a North East resident will surely have seen him playing such a system to perfection at our local Open tournament (I was one of his victims!).

It could be argued that the Hippo doesn’t have a high-level hero, yet as Martin rightly says, Boris Spassky used it twice in the 1966 World Championship match against Petrosian and went on to use it many more times with success. Tracing the history, Martin points to an earlier encounter between Spassky and Dr Max Ujtelky from 1964, in which the latter achieved a decent position with Black. Ujtelky is christened ‘Hero of the Hippo’ and has a chapter all to himself. 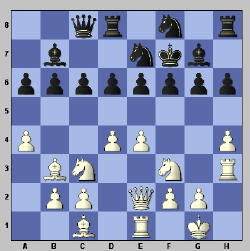 This is an example from the book, showing the Hippo taken to a great extreme! Amazingly, Black went on to win against one of the most dangerous opponents around.

I must declare an interest and say that I used the Hippo in an important tournament a long time ago. In 1983 I was one of four players contesting - along with Morray Vincent, Ken Glass and Stephen Trewick - the U-18 5-Minute Championship.

I adopted the Hippo in several games with the aim of playing my first 10 or so moves instantly and gaining an edge on the clock. The plan worked surprisingly well; clock handling played a big part in what was one of my very first tournament successes. 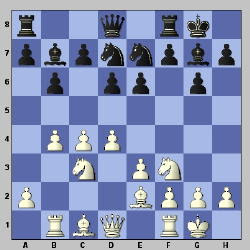 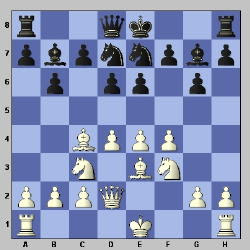 As I recall, both White players had already used considerable time trying to work out what Black was up to and how to counter it. Both games ended in favour of Black; both opponents were considerably higher rated at the time.

In a nutshell, the positions above demonstrate the basic Black set up. The book goes into good detail to enable the reader to combat the main White responses, such as early Bc4 systems (which ….e6 hopes to blunt), the Austrian Attack (f2-f4, often followed by the f4-f5 thrust, with or without a pawn sacrifice) and early Be3/Bg5 systems (the 150 Attack will doubtless be a very popular choice at club level).

Like a lot of Martin’s books and videos, the style is not encyclopaedic but instead concentrates in getting the player up and running as soon as possible, flagging up common pitfalls along the way.

As for example, in one of the author‘s own games…. 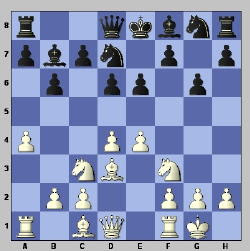 White has just played 7 a4 Martin replied with the dubious 7 …Bg7? allowing the strong response 8 a5! and comments that in such situations Black should early always reply 7 …a6 to meet 8 a5 with 8 …b5. The same is also true on the Kingside scenario, with …h6! The recommended recipe to defuse an early h4 thrust. It shows much of the Hippo’s resilience (and Martin’s practical way of playing) that Black eventually triumphed in the game.

One piece of advice given by the author is that ‘Black should have a good sense of humour. The occasional horrible defeat is inevitable playing this stuff’.

In the epilogue he says ‘I hope you have enjoyed our small investigation into the Hippopotamus system of defence and that you will consider playing it yourself from time to time, in whatever form’.

I don’t think the Hippo would be a suitable choice as the backbone of your opening repertoire, but unleashed at the right time, against carefully selected opponents, it could well be used to make successful cameo appearances.

I’d recommend using it against time-trouble addicts and/or players noted for their deep book knowledge. However many books they have read, they will still be a little in the dark when confronted by the huge hippo, lying low in the water in a state of apparent passivity, but all the time awaiting his chance to emerge and roll back everything in its path.

VERDICT: Looking for a thought-provoking guide for an occasional, surprise weapon? This optimistic guide will get you up and running quickly. 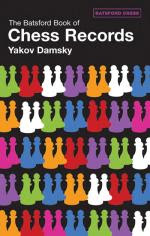 The Batsford Book of Chess Records
By Yakov Damsky
Batsford

I wasn’t sure what to expect from this book. Would it be a dry collection of statistics, or some sort of an updated version of Ken Whyld’s Guinness Book of Chess Records? It was neither; the book before me is a much diverse work than that and as such is rather difficult to pigeon hole. One thing is certain: the title doesn’t do the book justice, for there is a lot more to found within the 300 packed pages. Sure, the records are there: longest game, latest castling and all that sort of stuff but there is so much more.

The book is divided into four parts: ‘Games‘, ‘People’, ‘Tournaments, Matches, Events’ and ‘Around the Chequered Board’. There is so much interesting and entertaining material here that the prose could have been given a little more space to breathe and split into four separate volumes.

There are lots of entertaining snippets in the ‘Games’ section. Here’s one that caught the eye. 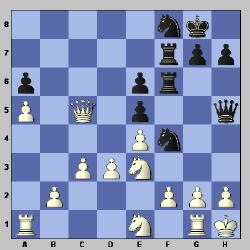 It was the great Alekhine who ensured this game was brought to our attention; he found it in a minor section of a German Congress and analysed it for a magazine. Black unleashed the stunning 23 …Qxh2!! Inaugurating an exciting King hunt. The finale was particularly impressive…. 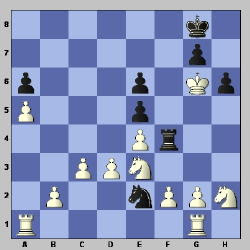 
‘People’ gives us various vignettes from lesser-known lights, all with remarkable stories, such as Charousek, Bernstein and Junge. There is some wonderful material here. Carlos Torre arriving in Moscow wearing only a light suit, because it was hot in Mexico when he set off; Klaus Junge dying in the Second World War, with a chess problem in his map case…it is not entirely clear as to which records such players broke or held, but it all makes for great reading.

‘Tournaments, Matches, Events’ is the biggest section and begins with some fascinating facts and figures about the World Chess Championships. Damsky often provides an unusual twist or viewpoint to present a very interesting point. For example, here’s a few things I never realised:
Max Euwe held the title of ex-champion longer than anybody else - 44 years!

If Kasparov had played the final game against Kramnik in 2000 (it was cancelled because Kramnik had an unassailable lead) he would have matched Karpov’s record number of World Championship games played - 194! Now that The Boss has retired it seems he will never beat his old rival on that score.

Spassky is the only title challenger who first failed and then eventually succeeded.

The final section, ‘Around the Chequered Board’ is a collection of odd and ends which wouldn’t really fit in any of the other chapters. This does not mean that the entertainment is less, by any means.

There is a story of Lasker playing Schlecter in a game sponsored by a German wine and spirit magnate. The pieces contained alcohol and the rules dictated that the contents of each captured piece must be consumed.

The wily Lasker, ahead of the game as usual, shocked the onlookers with… 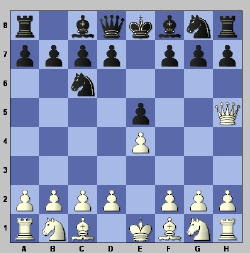 3 Qxf7+! Whereupon he had to drink a very small amount of alcohol from the small pawn, but Schlecter was forced to drink 150 grams of strong vodka. Needless to say, Lasker won the game.
And what can we make of this? In 1935 Elias Canetti wrote a novel, Die Blendung, in which the main character is obsessed with chess, who dreams of becoming World Champion and then retiring to America to become a recluse. This should already start sounding a bit familiar; even more so when we consider that the hero’s name is Fischerl, which the Americans in his dream struggle top pronounce, preferring ‘Mr Fisher‘. Spooky stuff, because the Fischer we all know wasn’t born until eight years later…

VERDICT: Ignore the title and think of this more as a sort of turbo-charged Fred Reinfeld book on chess lore. The author really brings the anecdotes to life and has created a very readable and entertaining book. A good one to dip into if you are not feeling happy with your own chess and need a reminder as to why it is such an enticing and exciting world.


For details of these and all other Batsford chess books, please visit: