Chess For Tigers
By Simon Webb
Batsford
We should all be grateful to Batsford for bringing out a brand new edition of this classic book.
The new cover is eye-catching and will especially appeal to Hull City fans and the tiger theme is continued throughout the book via the use of Edward McLachlan’s excellent and amusing cartoons that start the chapters.
Each chapter is packed with excellent advice on how to improve your play, e.g. ‘How To Catch Rabbits’, ‘How To Trap Heffalumps’ and ‘What To Do In Drawn Positions’.
Webb himself once trapped a very famous Heffalump. 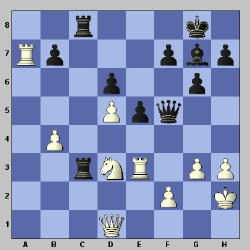 Webb – Reshevsky
London 1973
White is in trouble but he spotted a chance of a swindle.
He played: 30 Rf3 and feigned excessive nervousness, ostensibly due to his time-shortage, and hid the trick behind a facade of playing a quick move to enable him to reach the time control. Reshevsky was fooled and blundered with 30 …Qd7?? and was shocked by 31 Nc5! Which won the exchange and eventually the game.
One of the pieces of advice given to avoid blunders is to write down the move before playing it, but of course the rules now forbid this, as it can be taken as referring to written notes. However, an editorial note explains that this part of the book has been left in as a mark of respect to Simon Webb, who died in such tragic and terrible circumstances between him submitting the manuscript and it being published.
VERDICT: A real classic that everyone would benefit from reading, regardless of current playing strength. If you’ve got through life without this wonderful book, you have been missing out.

How To Choose A Chess Move
By GM Andrew Soltis
Batsford
There have been so many books on self-improvement over the years! Some are useful; some are just unhelpful potboilers and I was intrigued to see which route Soltis would go down as he has written books belonging to both categories.
He starts by questioning whether or not Reti really didn’t need to see a single move ahead during his famous combinations, as he had claimed, and quickly concludes that this is nonsense. Over the next 238 pages he tries to guide the reader through the various steps leading to the successful choice of a chess move.
A lot of the examples given to illustrate the themes are well-established classics but I was pleased to see a good number of very recent top-flight encounters, all the way up to 2005.
Nowadays, it is seen as trendy to be able think like a tree, because ‘green’ issues are definitely ‘in’. It’s the 2000s equivalent of the 90’s man being in touch with his feminine side.
However, thinking in terms of trees has been popular with chess players for much longer; in fact, ever since Kotov extolled the virtues of such a method in his classic work, ‘Think Like A Grandmaster’. The basic idea was to think through the possible candidate moves in a given position as if they were branches of a tree, but a player was advised to look at each branch once and once only before moving on to the next one.
Soltis goes a little bit deeper again and argues the pros and cons of this approach. For instance, he points out that such discipline and accuracy required to look at each branch only once involves powers beyond most Masters and are certainly not always suitable for your average club player.
One problem with thinking like a tree comes when the branches eventually merge and transpose, when there is a danger that the players will not twig the subtle differences along the way. 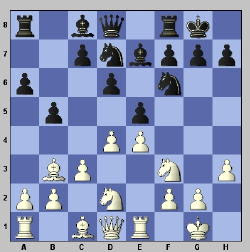 In 1993, Polgar and Spassky had a match and the Closed Lopez was one of their battlegrounds. Twice Spassky played the normal 11…Bb7 here, and after Bc2 Re8 they reached one of the main lines. In this game Spassky incautiously played 11…Re8?? But after 12 Bc2 Bb7 they merely transposed. Both players failed to see the difference – 12 Bxf7+! wins immediately as …Kxf7 Ng5+ and e6 wins the Queen in broad daylight. The correct move order, 11..Bb7, makes luft, not war.

There are some great nuggets of advice to be found in this book. For example, Soltis points out that, ‘the longer you study a position, the less you may see tactically.’ This must strike a familiar chord with most readers. How many times have you had a longer than average think, believing that you have sussed out the secrets of the position, only to have missed a one-mover early in the variation you had spent all the time on?

There’s lots of thought-provoking material in this book. Will reading it actually help the reader choose better moves? I really don’t know. After all the self-help books I’ve read over the years, I can’t recall ever consciously going through any of the various methods while I’m at the board trying to figure out the best way forward. Perhaps most of the advice is subconsciously buzzing away, but it still seems to me that most of us non-Masters choose moves based on a mixture of experience and intuition, tempered and clouded by how tired we are at the end of a working day, what else we have on our minds and what distractions there are in the room.

One interesting section considers a typical mistake in the way we think. Often, during a sequence we are calculating, it is easy to slip into thinking that a series of captures is forced, as in draughts. However, things are not always clear as this example shows… 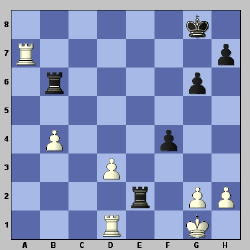 The Rooks have been taking pawns and White assumed that Black would continue the trend with 1…Rxb4, when 2 Rc1! is a strong reply. However, Black found the much stronger 1…Rc6! with a forced - and decisive - doubling of Rooks on the seventh rank on the way.
One of the most encouraging aspects of books such as these is how we can see that the top players can make exactly the same sort of mistakes we all do. 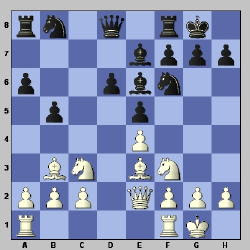 Here, Anand wants to complete his development with …Nbd7 but doesn’t want to allow Bxe6 and Ng5. Reluctant to ‘waste’ a tempo with the prophylactic 11…h6, he tries to gain one instead with a capture and played 11…Bxb3? Unfortunately for him, this is a terrible positional error with a very ‘club-playerish’ look about it. White’s bind on d5 could never be broken and Polgar could always plan to end with a Minor piece on that square. She later won brilliantly.

VERDICT: Interesting stuff and a good read. There’s a lot of thought-provoking material here and if you can absorb the information there is a good chance that it will indeed improve your decision-making at the board.

This interesting book begins by pointing out that the Olympic motto ‘Citius, Altius, Fortius’ (‘Faster, Higher, Stronger‘) is better suited to mental rather than physical activities and observes that the one-minute mile is absolutely impossible until humans evolve wheels whereas the ability of the human mind is virtually without limits.

The first two chapters cover the birth of Mind Sports, through such colourful characters as As-Suli (AD 854-946) of Baghdad ‘the first chess grandmaster, the first mental sportsman, the first genius of mind sports’ and highlights what qualities are needed to become a champion.
Subsequent chapter take a good look at a variety of mental records before moving on to various Mind Sports.

Naturally, the chess content will be of most interest to readers of this column. Over the course of 25 pages we are taken on a journey from the very beginnings of chess right up to the infamous Adams v Hydra ‘Man v Machine’ clash of earlier this year (which ended in a terrible defeat for the human and quite possibly signalled the death knell for such encounters).

Considerable attention is devoted to the World Champions and various attempts to rank them in order of strength. This can be a futile exercise - it is not possible to compare like with like, as things change so much over the generations - but it is always intriguing and fun to see how such rankings end up. Here, 18 players are considered to have sufficient criteria to enable them to be on the final list. Taking into account the results of all the serious games played by the greats, with various tweaking, Emanuel Lasker eventually emerges at the top of the list, closely followed by his old rival Wilhelm Steinitz. Kasparov is third, while Fischer - often the fans’ favourite - can only manage 12th place.

It is possible to argue all day with such lists but it has to be said that I agree with the sentiment expressed in the book that more attention should be paid to the early champions and their fantastic achievements. For instance, Lasker’s World Championship matches were so impressive that it is easy to slip into thinking that his trounced opponents such as Marshall and Janowski were very weak players, but that is certainly not the case. Lasker was World Champion for over 26 years - much longer than any other player, and a record that is very unlikely to be surpassed.

One unfortunate thing about a book dealing with records is that some of them will inevitably be broken, thus making some of the data out of date. Andrew Martin’s Simultaneous World Record, set in 2004, was broken a couple of months ago by Susan Polgar.

Whether or not one is interested in actually playing the other games featured in the book, (Go, Draughts, Bridge, Backgammon), the historical facts and records still make fascinating reading.
Dr Marion Tinsley is offered up as being a candidate for being ‘The Greatest Mind Sportsman of Them All’ for his fantastic ability in the world of draughts. He won seven USA National tournament without losing a single game and was undefeated internationally in match play between 1947 and 1995! In 1992 he won a massive match with computer program Chinook by a score of 4-2 with 33 draws.

The list of World Champions, from 1844 to present, is very interesting. Eight of the 21 are from Scotland (it’s always draughty in the Highlands, and the kilts are no help) and three from England, the sort of heritage British Chess can only dream about.

The book concludes with some puzzles and problems from the various disciplines.

Here’s a few random records to give you a taster…

Sean Adam is the fastest reader in the world, clocking up an amazing 3,850 words per minute.

Harry Lorayne has memorised 7,500,000 names and faces. So if he says, ‘I never forget a face’, you’d better believe him.

I was going to tell you who the World Champion of memories is, but for the life of me I just can’t remember.

VERDICT: Although not a chess book as such, Buzan’s Book Of Mental World Records is well worth a look and contains many staggering facts and examples that will keep the reader entertained and amused for some time. It may also inspire you to give some of the other games a try and that can only be a good thing.

For details of this and all other D&B books, please visit:
http://www.dandbpublishing.com/