The current World Championship tournament is a chess spectator’s dream, with so many fighting games to keep the viewer entertained, captivated and enthralled. My pre-tournament top-tip Topalov is in tip-top form.

For once, the line-up is fully respected and there is a refreshing lack of chess politics. The chess itself is the only focus of attention. There are no big-name retirements, no off-form World Champions and no talk of the Petroff draw-death to distract us all from the wonderful games being played.

Needless to say, despite having an Englishman in the line-up, there’s no chance of seeing even the faintest glimmer of coverage on TV. We could try and sneak into the schedules, bulging with a never ending stream of so-called reality TV shows, by changing the advertising slant from ‘World Chess Championship’ to a ‘few people sitting around playing chess’ but I doubt that would work. After a lifetime of enduring ‘geek’ tags I suspect the average chess player is ironically too normal to feature on live TV.

I was in the unfortunate position of having to watch about 15 minutes of ‘Big Brother’ a short time ago and I could actually feel my brain turning to jelly. Even worse - one of the adverts gave us the ‘delightful’ Jamie Oliver telling us all how to make a ham sandwich (gosh, thanks) and then displaying the manners of a dog when he proceeded to tuck into it while still standing and talking with his mouth full. Or was such a display merely a further example of ‘reality’?

Oh well, never mind. Perhaps we should just accept our cult status and continue to keep ourselves to ourselves.

The return of the World Championship in any shape or form should be welcomed with open arms and this time, after so many false dawns, it really does seem that we are on some sort of path to reconciliation and title-unification.

By way of celebration, here are a few random snippets from the rich history of the Championship….

There are dozens of key moments in the big title matches. Here’s a random selection from the archives… 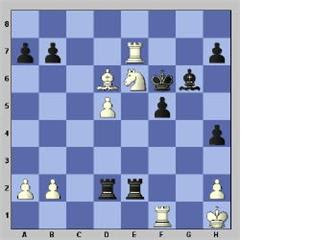 Steinitz - Chigorin
Game 23, 1892
With a victory in this game, Chigorin could have equalised the match at nine wins all, whereupon the match would have been extended beyond the ‘first to 10 wins’ rule as it was felt a margin of two points would have been required. However, Chigorin played one of the worst blunders in history with his shocking 32 Bb4?? Allowing one of the standard mating patterns after 32 … Rxh2 0-1 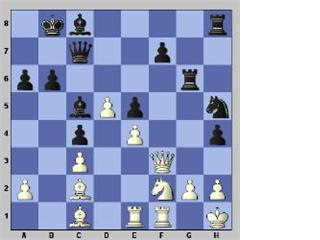 The only World Championship game to end in mate on the board. 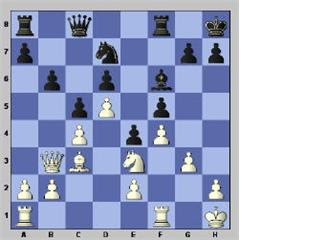 The moment it became clear that Euwe was going to topple the mighty Alekhine from the throne (albeit temporarily).
21 Nxf5!! Bxc3 22 Nxd6 Qb8 23 Nxe4 f6 24 Nd2 and the central pawns advanced to bring about Black’s downfall. Despite winning the next game, Alekhine couldn’t close the gap as the last three games were drawn. 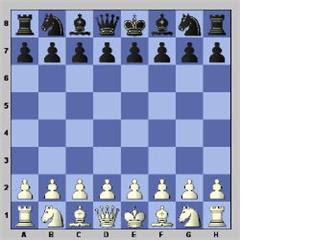 Not a joke, but a grave sign of things to come. Fischer’s principles, variously described all the way from ‘worthy’ to ‘baffling’ were to keep him from the game from the moment he won the title, with the exception of a big pay-day exhibition rematch with Spassky in 1992. 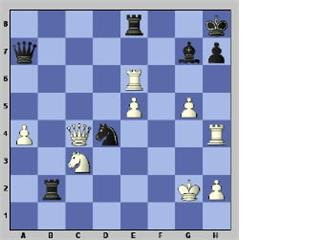 Karpov - Kasparov
Game 24 1985
With the whole board ablaze, Karpov resigns the game - and his 10 year-old title - to the only player he could never control.

Botvinnik on the young Karpov, circa 1965:

‘This young man understands nothing about chess’
Alekhine on the young Smyslov in 1945: ‘There’s a certain Smyslov, in Russia, who plays very well and will go very far’. Curiously, Alekhine had lost a game to Smyslov’s father back in 1912.

In 1983, Smyslov and Hubner met in a Candidates’ match. After three draws, Smyslov took the lead. Four more draws followed before Hubner finally equalised. Further games were required but they just kept on drawing. Ultimately, with just one win each and no less than 12 draws, the tie was decided by the spin of a roulette wheel. Smyslov chose red, Hubner black; the first spin came up zero. The second spin came up red and Smyslov progressed to the next round. (He went on to defeat Ribli but was eliminated by Kasparov in the Candidates’ final.)

In 1909, World Champion Emanuel Lasker played David Janowski in a four-game match backed financially by Janowski’s sponsor Leo Nardus. The contest ended 2-2 (four decisive games). Due to the fine showing of Janowski, Nardus sponsored a longer match. Thus a 10 game encounter was arranged which Lasker won easily with seven wins, two draw sand only one loss. This is the contest often mistakenly referred to as a World Championship match; it wasn’t but when the two met in another match in 1910 the title was definitely on the line. Unfortunately for Janowski, Lasker was again far too strong and easily picked up the eight wins necessary (won 8, drawn 3 lost none!).

Thus Lasker ensured a couple of decent pay-days from the generous Nardus. If the first match had been 4-0 rather than 2-2 it seems unlikely that Nardus would have seen it worthwhile to sponsor a title match with a potentially humiliating defeat for his favourite.

Did Lasker gambit two points in return for boodle? The lifetime score between the two players was 26 wins to 4 in favour of Lasker, with only seven draws.

The title match was the last occasion Nardus saw fit to sponsor Janowski. They fell out during a friendly game when Janowski could bite his tongue no longer over the playing strength of his millionaire benefactor. With the unwise words, ‘You are really the greatest patzer I have ever met!’ their partnership ended.

If your appetite for World Championship chess has been whetted, then off you go to find more interesting snippets! If it hasn’t, then go and grab a ham sandwich and switch on the telly!