The Beginning of an End 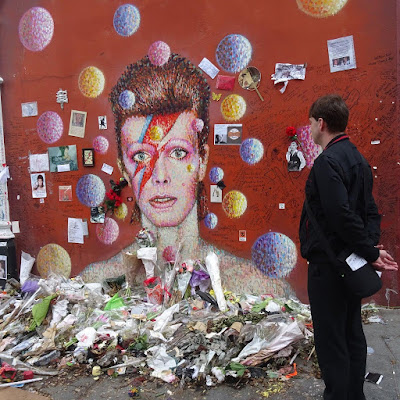 The shocking news came exactly one year ago today...

I wasn't expecting it; perhaps only a handful of people around the world were. When I switched on the early morning news, which was interrupted almost immediately by a breaking item, I was aware of an image of David Bowie on the screen and in the split second before the the presenters - themselves in a state of apparent disbelief - relayed the terrible news, I automatically assumed the item was going to be related to publicity for the brand new Blackstar album. Yet somehow the subsequent words didn't match the assumption in any way. The breaking news was unbelievable. David Bowie had died.

We should have grown used to the big Bowie surprises, even in his latter years. They came thick and fast over his final three years.

It was difficult to take in. Impossible to accept. I felt genuinely stunned as I made my way to work. I always try hard to avoid the negative aspects of people and life (we have history) but this was a difficult day with issues not quickly resolved.

Work colleagues were similarly shocked. It all felt like a strange and deeply unpleasant dream. With almost supernatural timing, my copy of Blackstar was waiting for me when I returned home in the evening. It was some time before I felt like playing the album.

Blackstar - the second new album in three years - didn't mark the end of the beginning. It heralded the beginning of an end...

We will continue our Bowie theme over the course of the week.
Posted by Sean Marsh at 22:08