Saltburn pulled off a considerable coup three years ago when they brought Robert Powell and Gabrielle Drake to their theatre for a very memorable evening and they repeated the feat last weekend by presenting another major star of stage and screen.

It's not often we get stars the calibre of Anita Harris treading the boards on our Teesside stages and when it happens it is obviously an opportunity not to be missed. However, the audience consisted of a disappointingly low number of people - fewer than 20, in fact. Maybe some were scared off by the threat of the impending storm. Whatever the reason, those who stayed away missed out on a very special evening.

Introduced by her husband and record producer Mike Margolis, Anita took to the stage with all of the star quality one would expect.

Amongst the opening anecdotes came one from a backstage rehearsal from a 1967 Top of the Pops, with Dusty Springfield informing Anita that her brother Tom had a song that would suit her very well. She then performed the song in question - Just Loving You - before introducing the film Carry on Doctor. 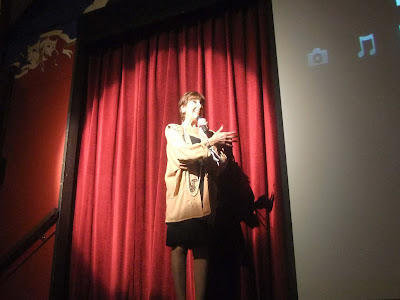 Following the film it was 'any questions', with Anita sharing her stories of working with the likes of Sid James, Kenneth Williams, Barbara Windsor, Charles Hawtrey, Frankie Howerd, Phil Silvers and Hattie Jacques.

Anita is currently writing two books; an autobiography and a book on pantomime. I'm looking forward to both. Her personal life has not been without great misfortune and tragedy; together with more anecdotes about the personalities mentioned above her autobiography should be a very good read indeed.

Anita came across as a genuinely very lovely person, generous with her time and blessed with a very positive outlook on life. Hopefully she will be back on Teesside some day soon, perhaps with a musical evening combined by a double-book signing session.

Follow the latest news and tour dates over at the official Anita Harris website.
Posted by Sean Marsh at 03:24