Cyril Neville's new album has just been released. Or rather, his gumbo (as he likes to call it) has - and he is happy with his sonic culinary skills: ''I'm extremely proud of this record. It's a tasteful, well-cooked musical gumbo that I think will be pleasing to the palates of music lovers.''

The recipe is essentially a blend of funk and up-tempo blues, with the occasional slice of rock and reggae thrown in for good measure. There's a good mix of tone to the songs too, from the innuendo-laden Magic Honey, the sweaty Swamp Funk, through the more serious mid-section of the album (Something's Got a Hold on Me to Invisible), the political Money and Oil and the winding-down reggae pace of Slow Motion.

It's no mean trick to balance such big ingredients and keep the whole thing on the boil. Indeed, Cyril's great experience is an essential requirement; at 64, and with a long track record behind him, his professionalism makes it look easy.

Cyril serves up the lead vocals and percussion throughout the gumbo and his musical kitchen features the following staff:

Stand out tracks: Something's Got a Hold on Me, Still Going Down Today, Invisible.

Find out more about Cyril Neville over at his official website.

Cyril is currently touring as part of Royal Southern Brotherhood! 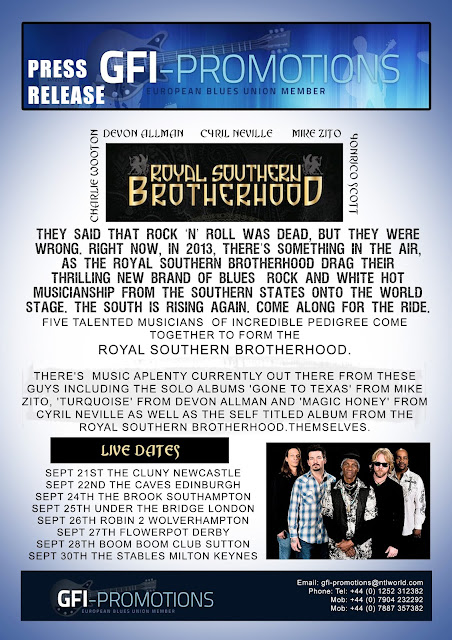