How To Beat Younger Players
By M Nigel Davies
3 Hours
ChessBase
'...older players often have jobs and families that take most of their time and it's no surprise they suffer painful defeats at the hands of spotty youths.'

The first volume of 'Chess For Scoundrels’ saw GM Davies pass on some practical advice on how to achieve more success at club level.

This new DVD deals with a growing problem to which no chess player is immune.

A long time ago, I played in a 5-minute tournament as part of the Walsall-Kipping weekend event. It was packed with Grandmasters and other titled players. A bunch of strong, improving juniors were there too. I watched one game in which GM Suetin lost badly to one of the juniors. He and I had a number of short conversations over the weekend. A little while after the game, he said to me: ‘Bleeeetz….is a young man’s game!’

However, the juniors still struggled to dent the armour of many strong players in full length tournament games.

Times have changed. Nowadays, young players are achieving better and better scores against senior players. We can no longer say, ‘It was just a blitz game and the kids are naturally faster’.

The experience of playing much younger players, ‘…with a baseball cap on backwards, munch their way through crisps the whole game, drink coca-cola, and perhaps have their parents hovering round’, is clearly one which GM Davies has been thinking about.

Here, his desire is to try and even up the odds for the ‘more mature player’ with some pertinent advice on how to play against apparent tidal wave of strong juniors, beginning with a short discussion on the factors weighing on older chess players (work, family etc). Experience and intuition can be outgunned by massive database preparation. It’s no fun at all being caught in a prepared line and being unable to wriggle off the hook.

The latter part of the DVD analyses games in which ‘oldies’ are triumphant against the younger generation.

Here’s a little example from the Tiny Advantages chapter. Petrosian, a player with an almost perfect style for beating lesser experienced players, would often avoid theoretical lines and simply develop his pieces on natural squares. This would lead to very rational positions, thus relying on his greater experience and better understanding of the resulting positions. 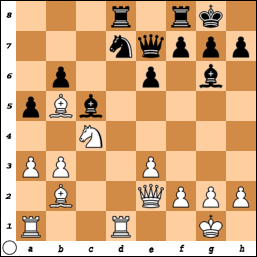 Petrosian - Veingold
Tallinn 1983
White to play and win
White’s early play had apparently lacked ambition but now, (with his pieces all on terrific squares, as if by magic) he had the chance to win the game. Can you see how?

Significant time is also spent preaching the importance of a little endgame knowledge and know how. This can be a tremendous practical help when playing against younger players. The mature player will become more confident as the game goes on, and longer games could lead to younger minds losing concentration and interest, with blunders in the air.

Another good tip is to use unfashionable openings, ideally those which were popular back in the day of one’s own early development. This is once again an attempt to swing the practical balance back in the favour of the player with the greater experience.

There’s good variety on this DVD. It’s a bit different to the norm and is quite quirky in parts. The advice is serious enough though and this offers very practical tips for all those who are fed up with losing to whipper snappers.

'GM Ftacnik sets out to explain the vitality of the key Scheveningen line, a rich position offering scores of different plans for both sides.'

In his introduction, GM Ftacnik claims that the Scheveningen ‘…is not an opening but a central world of the Sicilian’.

Over the course of seven hours he attempts to welcome the viewer to the world of this highly respectable line and endeavours to explain as much as he can about all of the relevant lines.

The presenter’s delivery is very good. He looks directly at the camera most of the time, his voice carries a quiet authority and the smile on his face reassures the viewer.

The explanations of the ideas behind the moves starts very early on; there’s a comment as early as 3 d4, explaining what White achieves by this seemingly anti-positional pawn exchange.

The material is broken down into coverage of these important lines:

The Keres Attack remains one of the biggest tests of the Scheveningen. 6 g4 is the forerunner of the English Attack (in which White plays an early f2-f3 and launches the g-pawn a little bit later). Indeed, the Keres is one of the main reasons most players like to start off with a Najdorf move order (1 e4 c5 2 Nf3 d6 3 d4 cxd4 4 Nxd4 Nf6 5 Nc3 a6; only heading for Scheveningen territory once White has shown his sixth move hand). So I was intrigued to see what was recommended on this DVD. If the lines given here are not sufficient then it’s folly to add the Scheveningen to one’s repertoire.

Two Black ideas are considered: 6...e5 and 6...h6. Unfortunately for Black players, White still enjoys the lion’s share of the fun and the illustrative games are typically crushing victories for the first player.

Black also seems to be experiencing topical difficulties in other variations. For example, there are new twists in the main line, such as this one… 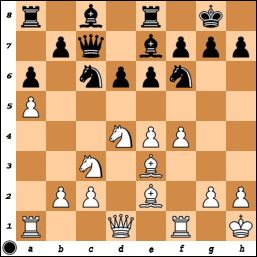 Fast forward a few moves and it starts to look serious for Black. 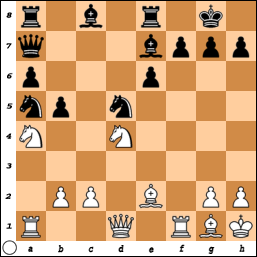 I was expecting a series of lessons to build up an extensive Black repertoire but it does seem to me that White has a lot more fun in the illustrative games. Ultimately this DVD may well prove more useful for opponents of the Scheveningen rather than it’s adherents.

The disc also contains nearly 8,000 games (some annotated) which can be loaded up in ChessBase and used to further the student’s understanding of this rich chess opening.

Remarkably, GM Ftacnik has recorded another version of the entire lectures in German and this is all included on the disc.

All in all, this is very interesting stuff but not quite what I was expecting.

Power Play 10: Calculation
By GM Danny King
4 hours 30 minutes
ChessBase
'...Danny King will help you to assess how good you are at calculating, and gives you tips as to how you might sharpen your thought processes at the chessboard.'

Volume 10 (of 12) in this fine series discusses and analyses a skill no chess player can afford to leave undeveloped.

‘Calculation is not an easy thing but it really is a core skill of chess playing.’

The material kicks off with a game from the recent Kramnik - Anand title match to demonstrate that even World Champions can make mistakes when calculating.

Then GM King picks out some puzzles from an issue of ‘Schach Magazin 64’ and solves them ‘live’. This is a very interesting teaching method, enabling a comparison between the calculating powers of a Grandmaster and the viewer.

Five puzzles are given and the viewer is then invited to mull them over. The next series of video clips consider each of the five positions in turn, with GM King giving a running commentary on his ‘live’ thoughts.

Here’s one for you to try: 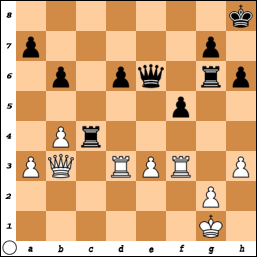 White to play
Is it advisable for White to capture the pawn on f5 or should he do something else?
I like this method very much indeed. The idea is not new; Mike Basman did something similar on some his Audio Chess tapes a long time ago, and CHESS Magazine used to run a ‘Beat the Masters’ feature in which strong Grandmasters submitted their thoughts and analysis on anonymous positions and readers were able to do the same.

It’s definitely something I’d like to see more of in the ChessBase format. There seems plenty of scope for development.

After the five solutions there follows an illustrative games between GM Gawain Jones and the presenter, to demonstrate different kinds of thinking.

Then it’s on to a series of studies, ‘…an excellent way to improve your calculating skills’. The process of elimination is an important discipline for the student to hone.

Here’s a study to test your powers: 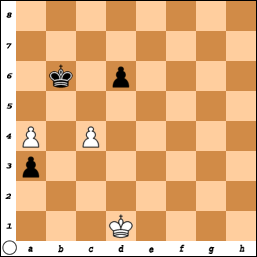 Grigoriev 1923
White to play
After the studies, the viewer is really put to the test with 17 positions to solve. These can be very tricky and require some serious effort.

There are other little bits and pieces too, such as a discussion on ‘When to Calculate’, and a ‘Postscript’ in which the presenter returns to an earlier position and updates his thoughts and analysis.

Despite being part of a long series, each individual ‘Power Play’ DVD works equally well as a stand alone product.

The presentation is excellent; GM King really does make it look easy.

Whole-heartedly applying oneself to the material will be hard work but there will be a strong sense of achievement for students who enjoy a challenge.