I am pleased to present the first real new blog content for your perusal.

I am very grateful to Steve Henderson, Cleveland Chess President and all round good egg, for his many years of support in hosting all my previous online columns.

We are working on bringing the entire archive of reviews etc over from the Cleveland Chess website ( http://www.clevelandchess.co.uk/ ) to this blog. In time, I am hoping to diversify and produce reviews for books other than chess (although works on the ‘little black and white men’ will naturally continue to make up the bulk of what will be found here).

So without further ado, please feel free to don your spectacles and run your beautiful eyes over the following brand new issue… 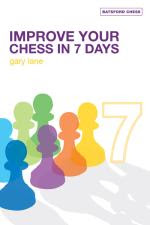 The book’s mission is simple enough: seven chess lessons, one for each day of the week, aimed at players who would like to improve their chess but lack the time (or inclination) for deep study.
The chapters offer a plethora of tips on aspects of the game from the opening to the endgame, plus advice on how to avoid blunders and how to swindle valuable points from lost positions.
IM Lane is the ideal author for such a book. His style is always very readable and his great experience as a chess teacher and writer enables him to communicate with the reader with consummate élan.
In the section ‘Strategy versus Tactics’ Lane reveals a good way to win more games. Using predict-a-move he suggests that you can often guess the move your opponent would like to play and set a cunning trap in anticipation.
There is much of interest in this book, particularly for the club player, but everyone should find something of interest and amusement. With Gary Lane’s customary humour well to the fore, this is an entertaining and instructive read. 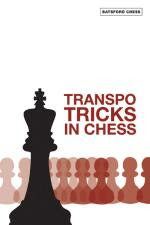 GM Soltis seems to have discovered a niche with Batsford. This is another slightly off-centre work with an unusual subject matter.
A lot of clever players use transpositions to force the game into patterns they are more familiar with, or to avoid the opponent’s favoured lines. For instance, Kramnik used 1 Nf3 consistently on his way to the ultimate chess title, switching between regular Queen’s Gambit lines and slippery English-based variations to counter respective opponents.
This is the first time I’ve seen a book totally dedicated to such transpositional tricks.
There’s some very interesting stuff here. In seven chapters, GM Soltis takes the reader on a guided tour of move-order tricks from the double King-pawn openings all the way to the Flank Openings.
Even top players can be confused by transpositions. GM Soltis looks at the move order….
1 e4 e5 2 Nf3 d6 3 d4 exd4 4 Bc4!?
Apparently, in an ECO volume GM Polugaevsky considered 4 …Nf6 5 Ng5 d5 to be in White’s favour. Yet on the same page he gave a different move order to the same position ( 1 e4 e5 2 Nf3 d6 3 d4 Nf6 4 Ng5!? exd4 5 Bc4 d5 ) and considered it equal.
Surprises await the reader in every chapter. For example, after 1 e4 c5 2 Nf3 d6 3 d4 cxd4 4 Nxd4 Nf6 White more often than not develops and defends with 5 Nc3 but in doing so gives up any ambition of achieving the Maroczy Bind. However, how about the cunning 5 Bd3!?

Soltis opines that after 5 …e5 6 Nf3 and 7 c4 is good for White, as is the alternative 5 …Nc6 6 Nxc6 bxc6 7 c4 g6 8 b3.
Up against a Benoni player in your next game? You could give this a try…
1 d4 Nf6 2 c4 e6 3 Nc3 c5 4 d5 exd5 5 cxd5 d6 6 Nf3 g6 7 Nd2
Now one recommended recipe for Black is 7 …Nbd7 to meet 8 Nc4 with the nullifying 8 …Nb6. However, after 8 e4 it turns out that White has done a little bit of home cooking himself. Black has been tricked into a Classical Variation, without the option of lines with an early …Na6 or …Bg4!
Very interesting! And typical of the thought-provoking material to be found in this original work. There’s no guarantee that this book will help you put points on the tournament table but you will be able to get more of your favourite positions on the board.
For further details about Batsford chess books, please visit: http://www.anovabooks.com/

The Grunfeld Defence enjoyed a revival when Garry Kasparov added it to his repertoire in the 1980s and dragged a theoretical debate with Anatoly Karpov kicking and screaming into the 1990s. In fact Kasparov’s score with the Grunfeld wasn’t that great and it even contributed to his World Championship defeat to Kramnik in 2000 when the latter hammered a firm nail into the coffin of The Boss as early as game 2.
However, with several top players and a whole host of club players following in the footsteps of the 13th World Champion, the Grunfeld retained it’s popularity and there’s certainly been no shortage of books on the subject in recent years.
One of the downsides of following fashion is that the average player simply hasn’t got the time to keep up with all of the latest top-level developments. In this new book, IM Dembo advocates a sensible-looking repertoire based mainly on variations which do not follow the absolute main lines.
For example, in the famous line: 1.d4 Nf6 2.c4 g6 3.Nc3 d5 4.cxd5 Nxd5 5.e4 Nxc3 6.bxc3 Bg7 7.Nf3 c5 8.Rb1 0–0 9.Be2
9 …cxd4 10 cxd4 Qa5+ 11 Bd2 Qxa2 12 0-0 is eschewed in favour of the (much) lesser-analysed but eminently playable 9 …b6
Against the trendy 1.d4 Nf6 2.c4 g6 3.Nc3 d5 4.cxd5 Nxd5 5.e4 Nxc3 6.bxc3 Bg7 7.Bc4 c5 8.Ne2 Nc6 9.Be3 0–0 10.0–0

…two options are considered, namely 10 ...Na5 and 10 …Bd7. Both of these steer well clear of the really critical lines following the more common 10 …Bg4, thus cutting down a lot of study time.
All of White’s major - and minor - options are considered, including the tricky 3 f3, with which White hopes to trick Black into a Saemisch King’s Indian. 3 …e5 is the fun solution offered. The weird 4 g4 and 4 h4 are also analysed.

The bibliography shows the depth of research at the same time as revealing the extent to which the Grunfeld has already been covered. Bill Hartston’s book has been omitted; a pity, because it predates the Adorjan and Dory book by over a decade, yet the latter is highlighted as the first important book on the subject.
Nevertheless, despite this minor historical quibble, this strikes me as being a well-written book and a very useful repertoire. Grunfeld aficionados will naturally lap up any new material on their favourite opening and this one would make an excellent addition to their bulging libraries.
For further details about Everyman chess books, please visit: http://www.everymanchess.com/

Congratulations Sean on getting online with your blog! Always an interesting read.
Regards Steve Henderson