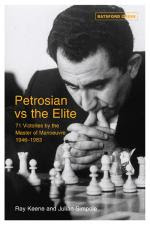 Think about Petrosian and what comes to mind? Draw, draw, draw…yet here was a man who achieved remarkable results at the very highest level of chess.
Defeating Botvinnik in the latter’s final World Championship match, in 1963, was more meritorious than is commonly believed. Botvinnik was still extremely strong and was by no means a spent force.
Iron Tigran then defended his crown against Spassky three years later before suffering a reversal against he same opponent three years later. Petrosian didn’t leave the World Championship after that but went on to contest many tough Candidates Matches against the likes of Fischer (in which he halted the American superstar’s terrifying game-winning streak and caused him real problems before Fischer stepped up yet another gear to finish the match) and Korchnoy (four extremely bitter matches, making Topalov and Kramnik’s recent bout as a match between best buddies…).
His score in Chess Olympiads was awesome: +78, =50, -1! His only loss was on time, to Hubner, in 1972.
It is clearly impossible to achieve such highs merely by drawing lots of games in a few moves. Petrosian’s games must be worthy of serious attention.
Ray Keene has occasionally attracted criticism for his writing style (‘a book in a weekend’) but he is never less than readable. True, there are some slim, easily written volumes but there are also plenty of classics. For example, no chess library is complete without a copy of ‘Aron Nimzowitsch - A Reappraisal‘. Keene is a much better writer when he is tackling a subject dear to him and it is clear that there are plenty of similarities in the play of both Nimzowitsch and Petrosian.
Keene’s 12-page introduction sets the scene for the rest of the book and is a refreshing and entertaining read. He highlights several interesting aspects of Petrosian’s chess career, including a series of missed opportunities from the 1956 Candidates tournament. Petrosian’s deep play had brought him several winning positions that he had failed to convert at the final hurdle. Apparently this experience almost led to him giving up chess.
There are some fascinating comparisons between the careers of Petrosian and Fischer and a brief examination of their drawn encounters at Curacao 1962. Keene makes the point that it would easy to link Fischer with the ‘draw conspiracy’ theory touted by Fischer himself and puts down a lot of Petrosian’s motivation to share the point as sensible tournament strategy.
Co-author Julian Simpole adds a short yet enthusiastic foreword and then it’s straight into the meat of the book: 71 of the ninth World Champion’s best games.
The volume concludes with several pages of tournament tables (not a full listing but very impressive highlights) and the indexes.
Similar is style to the recent Batsford books on Najdorf, Lasker and Kasparov, this book continues the laudable recent trend of dusting down the games of the erstwhile greats.
The title gives a clear indication as to the strength of opposition. There are certainly no weak players in this selection! There are victories against luminaries such as Botvinnik, Spassky, Tal, Fischer, Karpov…even Kasparov.
Curiously, the two Kasparov games are missing from the index of games. They are both classic encounters, well worth playing over. In Moscow 1981 Kasparov played his trademark 4 a3 against the Queen’s Indian Defence and ran into Petrosian’s brick wall. 4 a3 was Tigran’s pet line before Kasparov adopted it, of course! The second win, some months later at Tilburg in a QGA, is one of the most remarkable in the book. With Kasparov in full attacking flow, Black’s survival seemed unlikely … 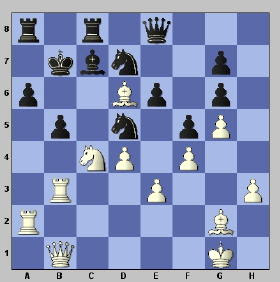 Kasparov - Petrosian
Here Black played the astonishing 35 …Kc6!! and went on to win on move 42.

Tilburg was a very important tournament; one might have expected Petrosian to push for first place after this remarkable seventh round success but his last four games were colourless draws in 13, 12, 10 and 18 moves. Beliavsky pipped him to first place by just half a point.

In other games the authors correct earlier published analysis and in a couple of instances even provide correct game scores for the first time.

A particularly noteworthy feature is the way other historical games are used in comparison to the ones under scrutiny. 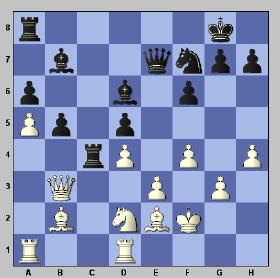 Petrosian’s trademark exchange sacrifice 30...Rc4! is an echo from another classic… 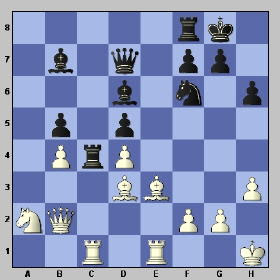 In both cases, White took the bait a few moves later. Result - two wins for Black.
Petrosian’s style of play was never going to be everyone’s cup of tea. Yet in a way his games make ideal study material, especially regarding his ability to carry out a plan of positional play that he could often carry through from beginning to end with an apparent lack of resistance from even very strong players. So, just as in the games of Capablanca, many lessons await the diligent reader.

The authors deliberately set out not to duplicate the earlier Petrosian volumes (such as Peter Clarke’s classic work ‘Petrosian‘s Best Games of Chess‘ ) and there is minimal overlap. Incidentally, those inspired to boost the Petrosian section of their library should track down not only the aforementioned Clarke book and the massive Shekhtman tomes ‘The Games of Tigran Petrosian vols 1&2’ but also the highly elusive 'Petrosian’s Legacy'.

VERDICT:
A very well written book, which should prove a real eye opener to those unfamiliar with the games of the ninth World Champion. This could serve both as an excellent introduction to Petrosian and also as showcase for some truly fine and remarkable games. A definite ‘hit’ for Batsford.


For details of this and other Batsford chess books, please visit:
http://www.chrysalisbooks.co.uk/