Historical chess books are much rarer than opening tomes and are less appealing to the general readership.

It’s often seen as far more fun to get stuck into another volume about the Sicilian Defence than a tournament book or a biography. However, every now and then a risk is taken and we are able to delve into the past and read about the great players of times gone by.

One of the many good things about the recent series of Kasparov books (‘My Great Predecessors’) is the way in which they re-examined the games of the great masters and fuelled a desire for more knowledge of the old champions.

World Champion from 1894 to 1921 - the longest reign of any world champion to date (indeed, Fischer (three years), Karpov (10 years) and Kasparov (15 years) combined only just beat his tenure by one year) - Emanuel Lasker is certainly a worthy subject for a book and a fresh look at his games is long overdue.

‘Why Lasker Matters’ sets out with the task of revealing ‘…for the first time the winning formula behind Lasker’s phenomenal achievements. With over 100 annotated games, he analyses the tricks, traps and techniques behind Lasker’s winning moves, and makes Lasker’s methods accessible to today’s players.’

A short introduction sets the scene and reveals how Lasker’s chess life started in the Berlin chess cafes and how he entered one of the minor sections of the German Congress at Breslau 1889 ‘…and to my surprise won first prize! So began my chess career.’

The book is very similar in style to ‘Bobby Fischer Rediscovered’ also by Soltis. Each game is well-annotated over three to four pages and there is a good mix of variations and verbal comments.

Some of the games should be familiar to readers, such as the classic encounter against Pillsbury (St. Petersburg 1895/6)… 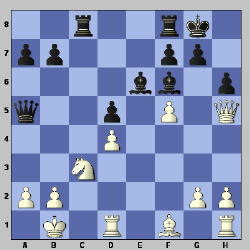 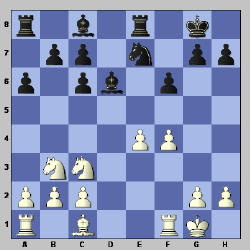 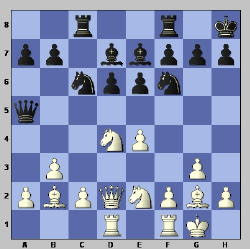 The annotations by Soltis make very interesting reading and draw on lots of different sources so there is a good balance of views.

There are also some lesser-known games from exhibitions and simultaneous displays. It is good to see some attention given to the story of The Rice Gambit. Isaac Leopold Rice was a rich chess enthusiast who was fascinated by one of his own ideas in the King’s Gambit. He sponsored events aimed at testing the variation, featuring big-name players including Lasker. 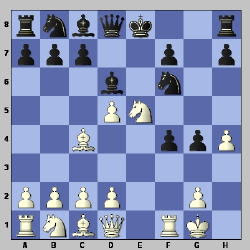 Black can take the Knight but White is hoping that 9 Re1 will start a strong attack.
Unfortunately, the variation wasn’t particularly good but none of the players - thankful for the funds - really wanted to let on. Soltis quotes Lasker from a book devoted to the gambit: ‘Let us admit, which is most probably true, that the gambit will not yield to the first player as high a percentage of wins as the Ruy Lopez or the Queen’s Pawn; but let us therefore not sacrifice the beauty hidden in the gambit…White is not lost!’ A game is given from a match with Chigorin in 1903, which Lasker won but he lost the match (+1, 3, -2).

Some of Lasker’s cunning is revealed in his choice of opening variations. For example, against Janowski - a dangerous attacker who loathed endgames - the choice of the Exchange Variation of the Ruy Lopez was an excellent one as an ending is almost inevitable. I was surprised to read that Lasker had played 500 practice games with this variation against Duz-Khotimirsky but it certainly explains how he had such a good feel for the positions it produced.

I would have preferred more biographical material. Some detail is given of his great and often bitter rivalry with Dr Tarrasch and there is an attempt - ultimately unsuccessful - to unravel the controversy of the 1910 title match with Schlecter, in which the 10th and final game was played at as if both players needed to win. The controversy surrounds whether or not there was a clause in the contract stating that Schlecter, who led by one point with one game to play, actually had to win the match by two clear points. If not, his method of play in the game seems somewhat odd for a player who was strong enough to play successfully for a draw. If the clause existed then why should Lasker play so hard for a decisive result? Possibly because it would have been a little bit embarrassing to lose a match but still keep the title. It seems that this is one chess puzzle that will never be solved.

There is a lot more that could have been said about the relationship between Lasker and his immediate successor, Capablanca. Lasker lost to the latter in a curious title match in 1921 that still has plenty of unanswered questions but the whole match is scarcely mentioned in the book. Lasker went on to finish above the Cuban in several major tournaments after their match, most famously at New York in 1924 and the dynamic between the two players appears complex and worthy of further study.

However, this is probably more to do with the symptoms of a greedy reader. After all, the book fills 320 pages so it is easy to see that the page count would have been impractical if more detail was included of Lasker’s life.

VERDICT: For the full Lasker experience, you will definitely need supplementary biographical material. However, if you are new to Lasker’s great battles or you wish to immerse yourself in a bygone chess age with the help of some well-annotated games then this book will definitely appeal to you. Following on from last year’s book on Najdorf, this volume continues the mini-trend of dusting off the old games of the greats. More like these please, Batsford!