Take Me To Your Reader!

Welcome to the new series of book reviews. We have several fine volumes to talk about so without further ado let’s open the pages and get stuck in to a bit of reading…


Pitching chess books for young juniors is no easy task. The style of the book has to be easy on the eye and easy to navigate; the contents have to be instructive without being too difficult. Three titles I can heartily recommend are the following…

Chess for Children starts with the very basics, with Kirsty the alligator teaching his friend George how to play. George threatens to flush his friend down the toilet unless he teaches him properly so Kirsty sticks to the task (despite some outrageous name-dropping along the way) and by way of lucid explanations and several Terribly Tough Tests, George gradually learns the game of chess. Kirsty is a good teacher and helps George understand not only the basic moves, but also the toughies such as castling, en-passant and basic tactics. By page 101 George knows enough to play Kirsty in the Big Match.

This is an attractive book and the authors do an excellent job of bringing the first steps to life. The illustrations keep things lively, although one can’t help but feel sorry for the young moose on page 9.

Improving juniors will need to start building up their recognition of standard patterns. Murray Chandler uses that as his starting point for…

This book concentrates on 50 Deadly Checkmates, using a very clear style. All of the old favourites are there, from Anastasia’s Mate to Philidor’s Legacy and Murray also takes the opportunity to introduce some new names to standard ideas. Thus we get Taimanov’s Knight Check, The Petrosian Draw and Korchnoi’s Manoeuvre. The book concludes with a page of examples of what to do if your Dad is Garry Kasparov! 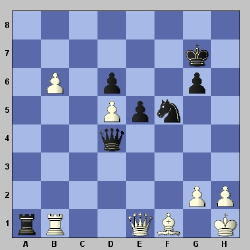 This is the position from which the name The Taimanov Check is taken. Can you see how Black can win quickly?

The World Champion of the time resigned after 1 …Ng3+! as after 2 hxg3 Ra8! the Rook’s journey to h8 will be decisive.

For an example of Korchnoi’s Manoeuvre see my UNCUT! 22 column in the site archive and to see what The Petrosian Draw is all about you’ll just have to buy this book!

…is identical in style and layout. It takes the reader through 50 Tricky Tactics, starting with Forks and running a glittering array of potent chess weapons from checkmating Queen sacrifices to Stalemate traps.

Gambit’s production values are extremely high. These three junior books are all very attractive hardbacks, which should last for years – even in the hands of juniors. In fact, I believe a lot of club players would benefit from reading through the examples of the latter two books.

Pattern recognition is a very important method of chess development. What should White do in this hopeless looking position? 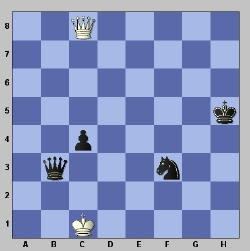 Igor Stohl has taken on a very tough task in trying to distill the best games of the world’s best player into two books. It’s very brave and, given the recent retirement announcement, very well timed. It is strange to think that there has not been a proper collection of Kasparov’s games for such a long time. In fact, the benchmark is still one of the later editions of ‘Fighting Chess’. Part of the problem is knowing where to start. Kasparov has played literally hundreds of superb games and narrowing them down is never going to be easy.

The short introduction provides some biographical information and puts the games into historical context, but this is hardly comprehensive and it is clear from the outset that this book is here to concentrate almost purely on the games themselves and not to try and write a complete life story.

Stohl typically gives four pages to each game and his analysis is of a high standard. Rather than just dumping variations on the poor reader, there is plenty of verbal explanation too. In fact, those annoying long variations that tend to overrun chess books are very much in the minority

Stohl’s first volume starts off with a game from an U-18 championship in 1973 and ends 20 years later with Kasparov’s famous title defence against Nigel Short. All the favourites are there as we see Kasparov battle with such chess heroes as Korchnoy, Petrosian, Polugaevsky, Portisch and many others. There’s also the odd game from Kasparov’s clock simuls. Not all of the games are wins for Kasparov; for example, the last game in the book is a remarkable save at the end of a fascinating battle with Short.

14 of the featured games are against his permanent rival, Anatoly Karpov. In these days of World Championship chaos, it is nostalgic to think we used to be spoiled by having a proper title match on a very regular basis. In fact, I’d say reading this book is a very nostalgic experience. Some of the great players featured are no longer with us and neither are such events as Interzonals and Candidates Matches. To think that Kasparov is now himself part of history is still a disturbing thought. The best we can do is to enjoy his fine legacy of great games. This book is great place to start. With an RRP of £22.50 for a 320 page hardback, I’d say this was excellent value for money and a recommended addition to your library. 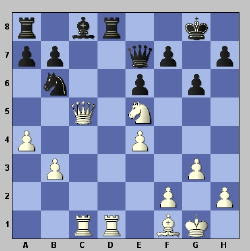 Petrosian never lost many games but he could find nothing better than resigning in this position. After 24 …Qxc5 25 Rxd8+ Qf8 26 Rxf8+ Kxf8 27 Rc7 his position will be totally dominated. 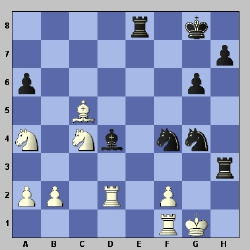 Hubner – Kasparov
Brussels 1986
38 …Nh2! and White resigned due to the impending doom of a Knight landing on f3.

The full stories of these games and 72 others are to be found in GM Stohl’s excellent new book.
For further details regarding Gambit chess books, please visit:

This is the third book in a Hocus-Pocus trilogy. The first two volumes combined bridge puzzles with logic and IQ tests and this one combines bridge with the greatest of all mind sports. Over 200 pages we are treated to 100 puzzles from both worlds. I have seen lots of chess puzzle books over the years and was very pleasantly surprised to see plenty of examples that were new to me. The first few examples are from 2003 and feature modern stars such as Luke McShane and Alexandra Kostenuik. Soon we meet up with the likes of Botvinnik, Bronstein, Spassky and Tal. This a great book for taking on a journey or to take out and read in the garden over the summer months. You can promise to cut the lawn and trim the hedges after the next puzzle and then suddenly get stuck and have to read on for a while longer.

Unfortunately, I am in no position to comment on the bridge puzzles as my card days are long behind me.

However, here’s a taster from the chess department… 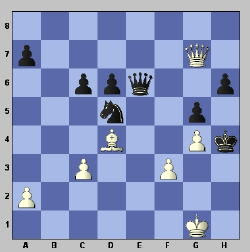 This looks good for Black but White can force a quick win. Can you find it?

There have moves afoot over the last couple of years to target club players who wish to take up new openings. Rather than lead readers up the garden path and into sub-variation 1243256B, just like the old days, the modern emphasis is more gentle introductions aimed at building up new repertoires. ‘Everyman’ started the ball rolling with their ‘Starting Out’ range and now Batsford are hitting back with their ‘Revealed’ series. The latest one tackles one of the most combative defences at Black’s disposal.

Anyone who has seen the marvelous book ‘Play 1d4!’ will already know how good a writer Richard Palliser is. This book is packed with lucid explanations and sound advice aimed at getting you up and running with the Modern Benoni as soon as possible.

Starting with 11 pages of explanation about the ‘First Moves’, the book then moves on to take a look at the Benoni ‘Heroes and Zeros’ which include Tal, Fischer and Topalov.

The superb ‘Strategy’ section details how to handle the various nuances of the defence, from the opening to the endgame and this is followed by ‘What’s Hot?’ This is an especially important chapter because we find out which lines are currently fashionable and/or particularly dangerous, meaning some extra work will need to be applied to avoid a string of defeats. Needless to say, the so-called ‘Flick-Knife Attack’ – or Taimanov Variation - is given pride of place here. After 1 d4 Nf6 2 c4 c5 3 d5 e6 4 Nc3 exd5 5 cxd5 d6 6 e4 g6 7 f4 Bg7 8 Bb5+ Richard places special emphasis on the 8 … Nbd7 variation, which has often been given as ‘dubious’ in other sources. Play gets chaotic for a while before we reach this critical position. 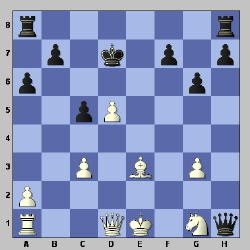 Richard devotes several pages to this intriguing position. For those who would rather not put their trust in 8 …Nbd7, he also covers 8 …Bd7 and the more popular 8 …Nfd7.

The book moves on to give a ‘Theoretical Overview’, followed by instructive ‘Tricks and Traps’ and then concludes with some puzzles to test your new Benoni skills.

I always have more faith in an author’s choices when he is prepared to practice what he preaches, so I was pleased to see examples from Richard’s own games in this book. And here’s another one, which he demonstrated live when he came up earlier in the year for an excellent coaching event for our Chess Links Project…

This is an excellent book and the best introduction to this tricky opening I have seen. Highly recommended!

Answer to Karpov v Taimanov
The World Champion of the time resigned after 1 …Ng3! as after 2 hxg3 Ra8! the Rook’s journey to h8 will be decisive.

Answer to hopeless looking position
White can draw by sacrificing the Queen 1 Qg4+! Kh6 2 Qg6+! and after the forced capture a draw is obtained because of the stalemate. I once saw Mike Closs draw a very similar position the same way in an important match v Bradford in the National Club Championship. Without the half-point, we’d have been KO’d.