Waiting For The Gift Of...

The Victoria and Albert museum in Kensington will be forever linked with David Bowie. Their David Bowie is exhibition of 2013 was hugely popular and is currently on tour. It will spend the next four months in Tokyo before heading to Spain.

The exhibition enjoyed unprecedented access to the David Bowie Archive and was a massive success.
They also made a film to accompany the exhibition, which hit the cinema screens in 2013. 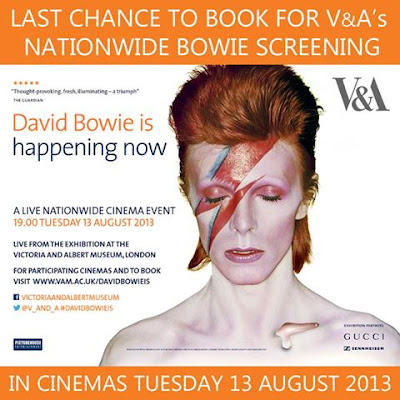 The V and A extended their association last Sunday with a day of special events to mark what would have been Bowie's 70th birthday. 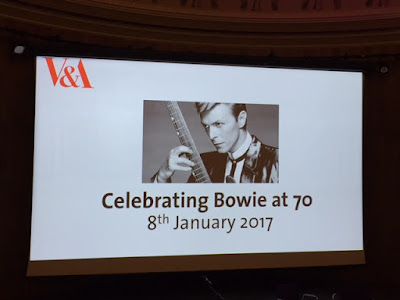 Celebrating Bowie at 70 featured Matt Wolf in conversation with Simon Sladen on the Lazarus play, Jonathan Barnbrook discussing his design work on Bowie's last four albums with Victoria Broackes and Nicholas Pegg discussing the new edition of his book, The Complete David Bowie, with Geoffrey Marsh.

There were four communal choir sessions (three rehearsals and a performance) throughout the day, during which Sam Coates coached us all on the art of singing Life on Mars, Space Oddity and Heroes. This proved to be - quite unexpectedly! - the highlight of the day. I had previously never taken part in anything like this but entered fully into the spirt of the occasion and thoroughly enjoyed the liberating experience.

The day concluded with a showing of the David Bowie is happening now film, which some of us had to miss due to the tube strike making it difficult to fit everything in before heading off to Brixton for the celebration gig (about which more later).

Celebrating Bowie at 70 was a great success and there is already take of the V and A holding a similar event at the same time next year.
Posted by Sean Marsh at 22:10