Project 30 returned to action last night with a rematch featuring the same teams as last week.

The same team won again only this time by a much more convincing margin. 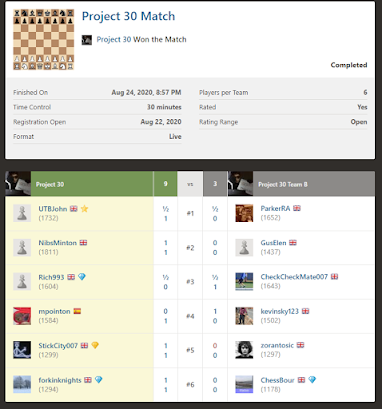 Richard Harris and Royce Parker were the captains again and Paul Weightman was in charge of the IT aspects of the match.
Now the early experiments have concluded I will put together a plan for the main Project 30 events of the forthcoming season. It looks very likely we will have to remain online for now.
Well done to both teams on providing another fine evening of entertainment.
We conclude with a gallery showing our chess stars in action.

Following on from the announcement from Mick Riding on the North vs. South chess match comes news of an actual over-the-board chess event - the 56th Northumberland Chess Congress.
The Congress will be on the weekend of Friday 25 September - Sunday 27 September 2020 at:

Mick and his team have worked very hard to ensure the tournament is as secure as possible regarding the Covid-19 situation.

Head here to see the entry form and also to read about the Covid-19 measure that will be in place.

This message is from the man himself...


On September 5 (match starts half 6) we have the opportunity to take part in a historic rematch between North and South, the first since 1894.

For the background stuff go to https://www.englishchess.org.uk/online-north-v-south-challenge-2020/

The occasion is about participating. Of course it's nice if you're a 200+ ECF player, but us lesser mortals need not worry. The match will look to pair people up as closely as possible to their playing strength - so there's room for all.

On the back of our stand out efforts in the County, Pool and U100 matches this would be a big fat cherry on the cake. And The North has never won this challenge. Time to put that right yes? 🙂

The only prerequisite is ECF membership. Be aware most expire end August. So if you haven't renewed please do - or at least sign up as a Supporter (£10) which can later be upgraded to membership - and your £10 will counts towards membership.
Posted by Sean Marsh at 07:03 No comments: 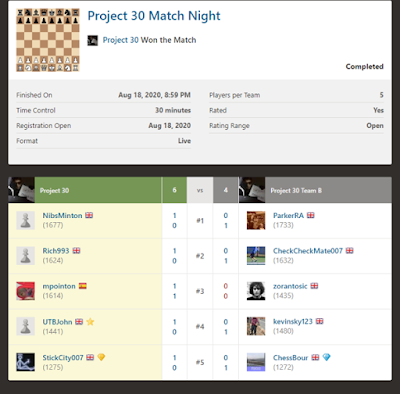 The Project 30 players were split into too well-balanced teams and Paul Weightman set up the match on Chess.com. 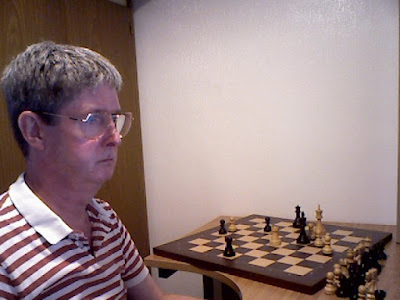 The players practiced social distancing by staying in their own homes.

Captains Richard Harris and Royce Parker sorted out the board orders and we played two rounds of Rapidplay chess.

Richard's team took a big lead from the first leg and even though Royce's team fought back valiantly in the second leg it wasn't quite enough to hold the match.

Mike Pointon won both of his games, clinching the match win for his team.

The match was a success and a rematch will happen soon.

Then we will look towards setting up some new events for Project 30 if the emergency continues to keep us away from our chess clubs.

English Chess Federation
BOOK of the Year 2020
Short List
The Short List this year features remarkably different books on two of the greatest World Champions; the first is an inside story of the coaching that helped make and then kept Kasparov as world champion, the second covers Emanuel Lasker before and after he lost his title but also looks at his numerous other activities. In contrast, two well written books by professional academics; one covering his short but lively chess career, the other is a delight to read whilst obtaining serious instruction.

These two volumes written by Kasparov’s coach from his early junior days to the Karpov matches, give detailed insight into the problems of coaching an outstanding talent (vol 1) and then the
different issues arising from working with a world champion (vol 2).

Essential reading for any coach, but also much to interest the general reader. Both volumes include previously unpublished Kasparov games as well as some known ones, annotated from the coach’s point of view.

The second volume of a trilogy, looks not only at chess issues but also at Lasker’s personality and wider life away from chess. All world chess champions concentrated on chess. Not so Lasker whose
wide ranging mind was always exploring subjects that interested him: games (Go, Bridge), mathematics, writing books on diverse subjects as well as chess, plus various business interests.

Despite all these distractions, Lasker remained a mighty chess player, heading Capablanca in all three tournaments they played together, and demonstrated by a fine selection of games.

The Best I Saw in Chess Stuart Rachels New in Chess paperback pp416 £26.95

Rachels was a talented junior playing chess at all levels. His biggest achievement was winning the 1989 USA championship at the age of 20, retiring from chess playing three years later.

This lively and fresh book is the story of experiences during his short career and covers a wide range of subjects some deep and profound, others humorous and entertaining. Rachels gives a vivid picture of the chess world before computers. An engaging book to dip into and enjoy its varied content.

The title might suggest that Smerdon’s book is just a collection of mishaps and disasters, but the underlying theme is more serious: how players may give themselves chances in the most difficult positions.

He covers various chess ideas, but also the importance of understanding the opponent’s state of mind to obtain the appropriate conditions for setting a snare. Smerdon writes exceedingly well, but best of all there are many delicious positions to savour. What entertainment!