Photos From The British

I was present at the 11th round of this year's British Chess Championship, held in Sheffield. Here are a few photos from a busy day. 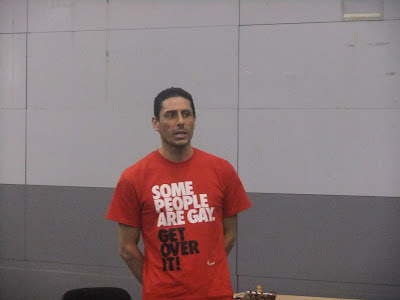 CJ de Mooi - the President of the English Chess Federation - announces the start of the 11th and final round of the 2011 British Chess Championships.

The President's T-Shirt was soon to become the subject of much debate which was, however, quickly swept aside by the tide of bad news from around the country. 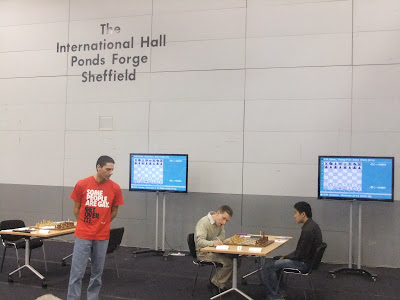 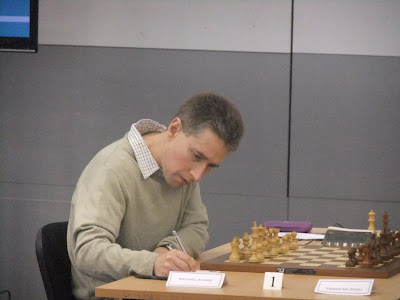 GM Michael Adams went on to become the British Champion, following a two-game play-off against... 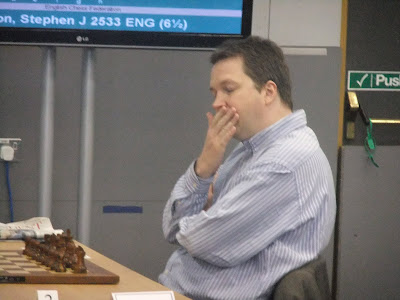 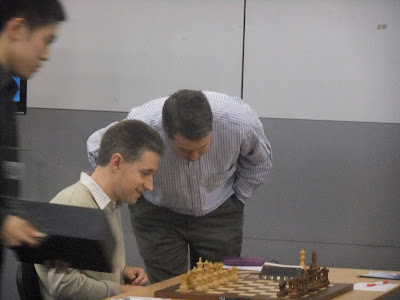 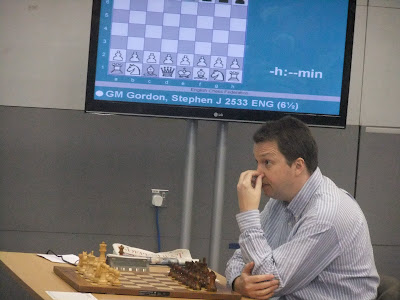 GM Short checks to make sure his nose is still where he left it. 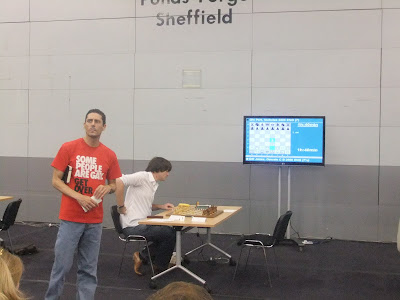 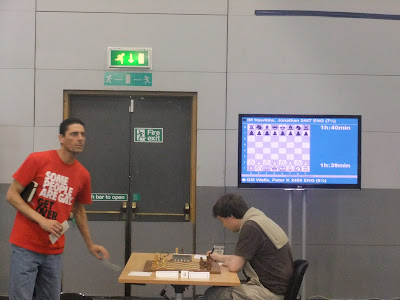 It was terrific to see IM Jonathan Hawkins battling away on the top boards throughout the tournament. Of the top players, he beat Howell, drew with Adams and Jones and lost only to Short. He earned his second Grandmaster Norm and was within half a point of earning a place in the play-off for the title.

Of course, The Hawk is no stranger to Marsh Towers. He was the special guest of honour at the recent Mike Closs Memorial Tournament. Jonathan is the strongest player the North East of England has ever produced - with a single exception: Grandmaster Jones! Gawain broke some of his first chess records while he was living in the North East.

It must surely be only a matter of time before Jonathan obtains his third and final Grandmaster Norm. I, for one, am very proud of him (and Gawain too, of course). 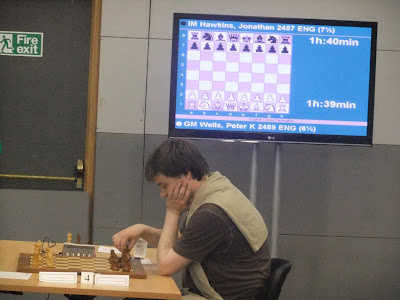 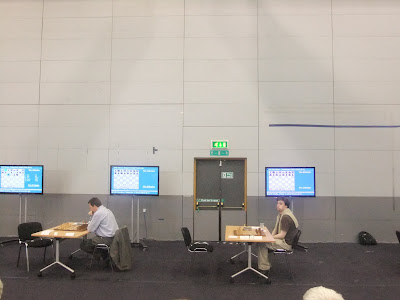 Still waiting for their opponents... 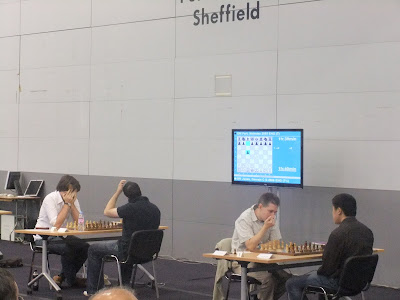 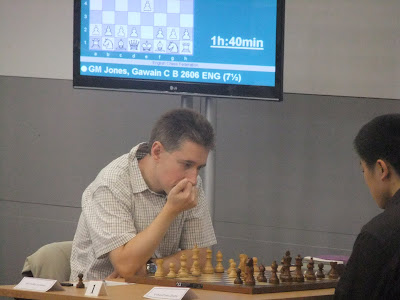 The game GM Adams v IM Yang-Fan Zhou turned into a real nail-biter. Rather surprisingly, the UK's No.1 player could only manage a draw with the white pieces. 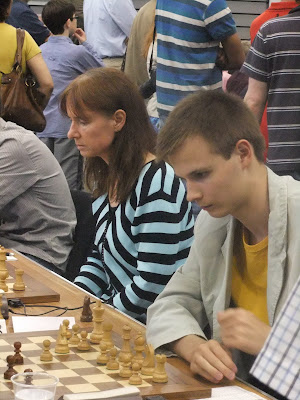 I was very pleased to meet some friends I'd not seen for a while, including Susan Lalic and her son, Peter. The latter produced the superb videos for the Mike Closs Memorial Site. 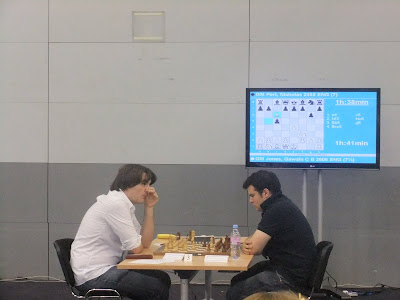 Now it's Gawain's turn to check on his nose. 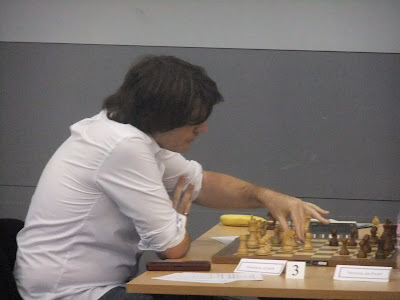 A typical hand gesture by the reigning Commonwealth Chess Champion. 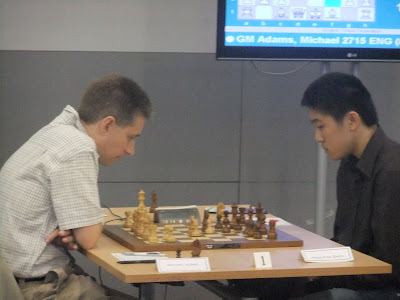 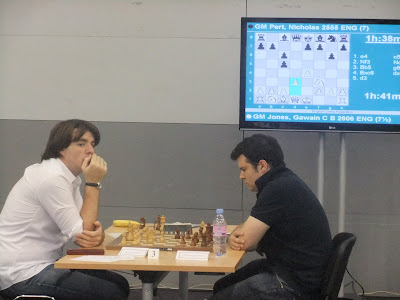 Gawain's game against GM Nick Pert went on for eight hours and 144 moves! Result - a draw. Gawain needed a win for a place in the play-off. 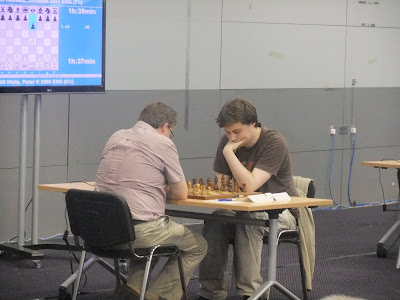 Jonathan made a comfortable draw against GM Peter Wells. 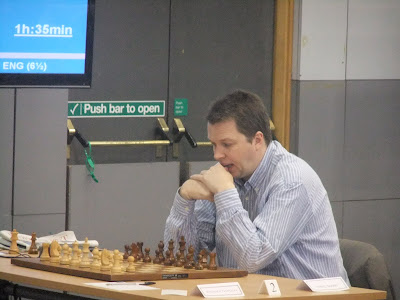 Nigel Short drew his game too - with GM Stephen Gordon. 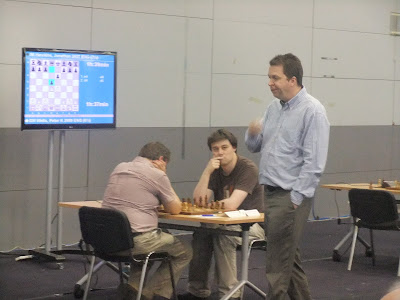 It was a great Championship this year with lots of interesting games.

The full scores from the British can be found over at the official website.
Posted by Sean Marsh at 08:04