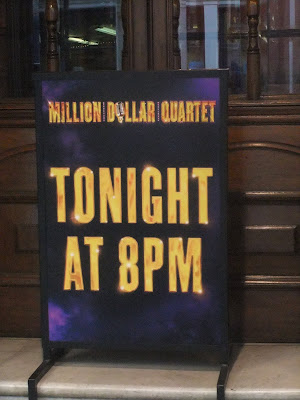 The night after seeing Brian Setzer, I thought I'd continue the Rockabilly theme with a trip to the Noel Coward Theatre to see 'Million Dollar Quartet'. 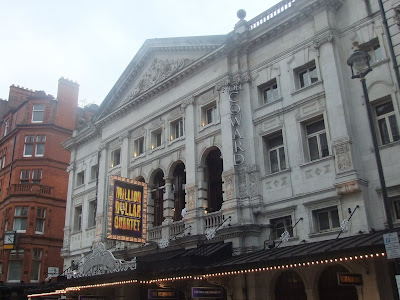 It turned out to be an excellent choice. It's a fusion of a play and a concert, based around the night when four of the brightest musical stars of all appeared together at the Sun Records studio on December 4, 1958.
Carl Perkins, Elvis Presley, Johnny Cash and Jerry Lee Lewis were the stars in question. All of them had benefited from the wisdom of Sam Phillips (owner of Sun Records) yet it was the one and only time they were in the same room at the same time. They played a famous, impromptu jam session which was recored. 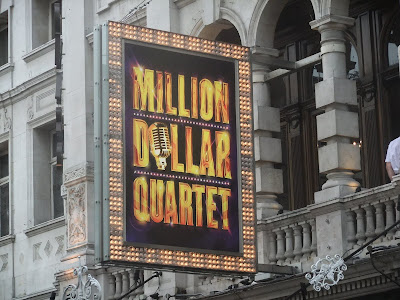 The play examines the relationships between the key players. There was a prevalent feeling that keyboards were out of place in the Rockabilly world, but of course Jerry Lee Lewis (portrayed as the cheeky new kid on the block) would overcome that way of thinking.
There were tensions between the friends too, with Carl Perkins still regretting the time Elvis had a monster hit with the former's 'Blue Suede Shoes'.
Between the dialogue, we were treated to full-on musical performances by the extremely talented cast, with three guitars, a piano, slap-bass and drums all working overtime.
It really is a good show. I was delighted to have secured a central, front row seat for this one.
For more details, please visit the official website.
Pygmalion
Garrick Theatre
26.7.2011 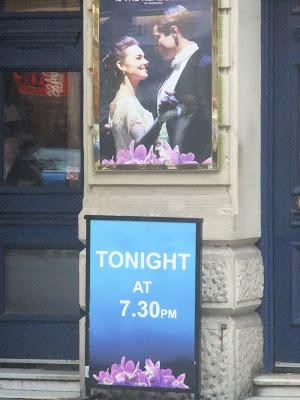 There was just time to squeeze in one more show before I had to leave London. I've been to the Garrick Theatre once before but this was the first time I've Pygmalion (or 'My Fair Lady - without the songs', as some would have it). 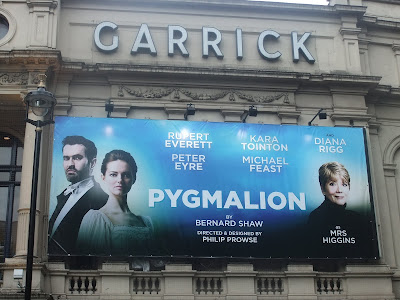 A slight disappointment awaited me on arrival. Diana Rigg was 'indisposed' and would not be able to appear!
I'm sure everyone knows the basics about George Bernard Shaw's famous play, in which Professor Henry Higgins (Rupert Everett) sets out to make a lady out of Eliza Doolittle (Kara Tointon). The cast was on good form and the quick-change scenery very well realised. It made for an enjoyable last night in London.
More details can be found on the Pygmalion website.
Posted by Sean Marsh at 01:05