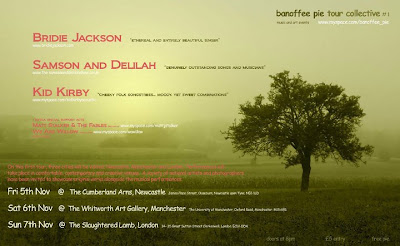 (Image copyright: Bride Jackson)
I first saw Bridie Jackson when she supported Cara Dillon at the Durham Gala Theatre earlier this year. Big plans are afoot with Bridie's music. The Banoffee Pie Tour Collective is coming at the start of November and it will feature a whole range of singers and musicians, with shows in Newcastle, Manchester and London.
I was interested in this venture and wanted to find out more. What better way than to ask Bridie herself...? I am delighted to present the first part of an exclusive interview with Bridie Jackson, in which all about the Banoffee Pie Tour Collective is revealed...

So, the Banoffee Pie Tour Collective…tell me exactly when you first had the idea for that.

I think it was sort of an idea born out of frustration, really. I really wanted to branch out in terms of the areas I was playing in, but it's really hard to get booked outside of the region your known in. Just hounding promoters with emails doesn't really cut it. So I decided that if I wanted to play out of the region, I would have to do it my own way or it would just never happen. I contacted quite a lot of musicians from other cities and actually found out that they were experiencing exactly the same thing. So I thought, well, we should just create our own network and support each others work.

Then I contacted my mate Laura (who performs under the name Kid Kirby) who used to run and promote a really good gig night called Banoffee Pie and asked her to be involved and she was up for it so that's how it started and it's sort of just grown and blossomed from there really.

The first tour is very small - it's just three dates but every single gig is very special and carefully put together. We've had complete control over the press and the promotion and booking the venues, which is what we wanted. Obviously, all the bands we've booked ourselves, so we know what to expect. And it's really taken off.

So the Newcastle gig is on the fifth of November - bonfire night - at the Cumberland Arms and that will feature me, Kid Kirkby, who's a London-based performer; Samson and Delilah, who are a Manchester band, and Matt Stalker and the Fables.

Do you know these people of old, or are did they all come from your recent contacts?

It's a mixture of people we've known of old and people we've contacted because we thought they would fit the bill. It's got a bit of an anti-folk vibe. There's also going to be an artistic element to it, in that the Manchester gig is actually going to shown in a gallery and it's part of an exhibition, and for all the gigs we are offering artists the opportunity to exhibit their work on the nights, both pieces of work and live artists

Yes - exactly! We will also be giving away free banoffe pie to everyone who comes to the gig.

Literally - everyone gets a piece of pie?

Yes - everyone gets free banoffe pie! Because you know, people will go anywhere for free food! That's the thinking. Hopefully, not only will the tour be a success, but it will lead on to us being able to do it again.

I there a precedent for this idea? Is there a template from other artists, or is it purely your own idea?

No, I haven't…although since then other people have approached me and said, 'Oh, I've been trying to do something a bit similar…' so we've made links with other people through the idea.

I think it's a fantastic idea. Going to the different areas, there will be a little bit of familiarity anyway, as the locals will know their local artists…

Are there potentially any problems with egos or band politics?

No, because that was one of the criteria, that everyone involved had to really nice and easy to work with!

Are you going to record the shows?

I haven't even thought about that, but it would be really good to maybe film them and show them on You Tube or something.

Will it be an annual event or more often than that?

Hopefully it'll be a bi-annual event, but with different performers each time. Fingers crossed that it'll actually happen!

Are the tickets selling right now?

No - it's turn up on the door for all of them. Obviously you're on the guest list…

That's the clincher! Can you tell me a little bit about the other artists?

Yes; Kid Kirkby is an incredibly creative, avant-garde singer-songwriter, with a completely unique voice. A bit like Joanna Newsome. She has this very fragile, expressive voice. She's really amazing..

Have you known each other long?

For a few years, And then the other band is Samson and Delilah, a five-piece folk-rock band.. I think they're a really special band. I saw a few years ago and I always remembered them. So I asked them to be involved and fortunately they were up for it. Then there's Matt Stalker and the fables whose playing both the Newcastle and London gig and We Are Willow, who will play for the Manchester gig.

How long will each act be on the stage?

Probably about 30 minutes each, but we'll take it in turns to headline and whoever's headlining will get a little bit longer.

So you headline in your own town, presumably?

You say your genre is anti-folk…

Well, I don't know… someone said that and I don't really know what to call it.

This is one the things I've found very interesting as I've explored more avenues of music; trying to pigeon hole something is incredibly difficult. The lines are very blurry between the genres. For example, years ago, it seemed that rock, folk and country were very distinct genres and nothing really stepped out of those genres. But now it's almost impossible to say to people exactly what it is.

If you mention the word folk, it could send people running a million miles..

It has a million connotations, too…but equally, if you don't label something at all, then people are fearful of it. If it doesn't conjure any sort of concept in their mind, you know…? So I do need to decide what it is that I do!

What is the pure definition of anti-folk?

I don't really know.. it's a movement which started in New York a while back; it's also sometimes referred to as new folk, psyche folk. It often means quite sparse, minimalist music - not heavily cluttered or arranged, often produced in quite a lo-fi way.. I think it's to do with the style of delivery as well; it's often quite personal, it's often a little bit uncomfortable…but I'm not entirely sure what it is and if I fit into that category or not, but so many people have said it, I'm sort of grudgingly going, 'All right!' Someone said post-folk; I thought that was quite fun.

As in what I should call my music - post-folk. But it sounds a bit pretentious doesn't it?
Not at all! We are looking forward to seeing the Tour Collective and a report should appear here in due course.
Bridie Jackson, thank you very much!

The next part of the interview will follow soon and it will focus on the songs of Bridie Jackson.

There's a little bit more information on the Tour Collective - and a link to the official Facebook page - here.
Posted by Sean Marsh at 03:00