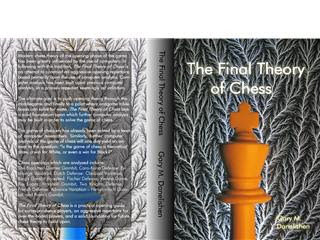 The Final Theory of Chess
By Gary M. Danelishen
Phillidor Press
386 pages
Can chess be solved? Is there now - or will there ever be - a computer powerful enough to provide a definitive answer on the best moves and the best variations? The author of this new and ambitious book certainly believes that to be the case. As he writes in the Introduction:
'The game of chess is a game of incredible complexity, yet chess is still a finite game and therefore solvable. Chess will one day be solved; the question is not if, but when. technology will ply key role in how chess is solved.'
To that end:
'The Final Theory of Chess is an attempt to lay a solid foundation upon which further analysis may be built in order to reach the first goal of a partial solution to the game of chess.'
Interesting chapters follow on 'The Problem of Complexity and the Final Theory', 'A Brief History of Chess Thought', an 'The Foundation of the Final Theory of Chess' before the meat of the book is reached.
Essentially, the book attempts to provide as definitive an account of modern chess theory as possible.
'The Final Theory of Chess a practical opening guide for correspondence players, an aggressive repertoire for over-the-board players, and a solid foundation for future chess theory to build upon.'
The method is an unusual one. Several computers were left to analyse things to exhaustion; the book represents a distillation of their efforts. Consequently, what prose there is in the main body of the book is largely confined to provide a little bit of background to the genesis of each opening. The rest is languageless strings of moves, punctuated by (on average) three diagram per page.
The repertoire for White starts with 1 d4 and the backbone is the Blackmar-Diemer Gambit. 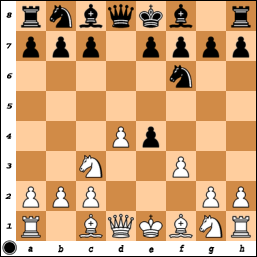 Position after 1 d4 d5 2 e4 dxe4 3 Nc3 Nf6 4 f3
It is a controversial choice. The gambit is often brushed aside in theory books but it retains a certain cult status. Will this book lead to a revival of the Blackmar-Diemar? That is up to you, dear readers, for you play much more chess than I do.
Naturally, Black doesn't have to fall in with White's plans and there are many other defences to try. Each and every one of them has been subjected to the analytical scrutiny of the powerful Fritz family.
For Black, 1 e4 e5 and 1 d4 f5 are the mainline recommendations, but every other White opening possibility is covered, starting with Anderssen's Opening (1 a3).
After 1 e4 e5, all of White's main tries are given substantial coverage, in particular The Marshall Gambit, which is given as a defence against The Spanish Game. The lines of analysis are long even in standard works; here, it is common to see a split after move 30, such as this one: 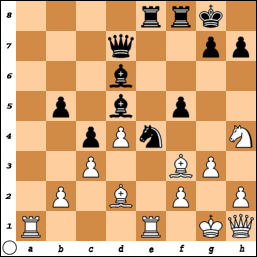 Five moves for White are analysed, namely:
30 Bg2, 30 Bg5, 30 h3, 30 Qg2, 30 Re2
I suspect the repertoire for Black will meet with more universal approval than the one for White; after all, 1 e4 e5 and The Marshall Gambit feature in the games of the World's elite. However, the critical test of the material will come in competitive play and given the amount of analysis on display I think correspondence players will be the likeliest guinea pigs.
This is not the sort of book you'd want to read on a bus but it has to be seen as part of a bigger picture. The 'Wiki project' for The Final Theory of Chess allows all readers (with certain stipulations) to make their own contributions.
It's a very unusual book and Mr Danelishen has certainly tried to do something very different to the norm
For further details, pop along to:
http://finaltheoryofchess.com
Posted by Sean Marsh at 08:14