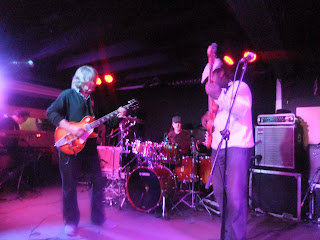 Mick Taylor doesn't tour particularly often and I was pleased to discover that he was appearing within reasonable striking distance.

The cavernous domain of Fibbers provided a very suitable venue for some real down and dirty blues by the former Rolling Stone and his band. Indeed, it was good night for blues fans in York; Oli Brown was playing just a couple of doors up the road, at The Duchess.
I saw the Stones in Sheffield back in 2007 but of course Mick Taylor was long since gone from 'the greatest Rock 'n' Roll band in the world' by then. What to expect? Mick played down expectations as soon as he appeared on the stage, with the greeting:‘Welcome everybody. There’s nothing really that slick or professional about what we play, so…here we go!’ 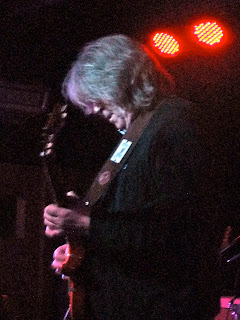 Fibbers makes for an intimate evening. I spent the full 80 minutes of the show right at the front, virtually within touching distance of the band and with my right ear almost touching the right hand side amplifiers.
The first two numbers were fast-paced songs, namely Secret Affair and Twisted Sister. Both are from Mick's solo album, A Stone's Throw. Self-deprecation was the order of the evening. After playing both songs back to back, Mick announced that they were a '...couple of obscure classics they were recorded, like, 14 years ago…On an album that as one actor said about one of his movies, it wasn’t so much released - it escaped…' 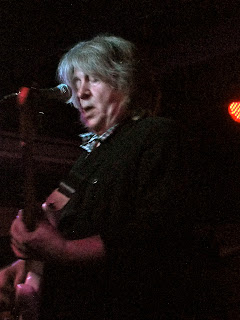 He never seemed entirely comfortable between the songs and said on more than one occasion that he found the sound too loud. 'We also play some blues but the bass drum’s too loud – we’re not a big disco band either.'

Indeed, the sound was frequently murky and dogged by a buzz of feedback for most of the evening. Somehow, the imperfections suited the evening. That's the blues for you.

Late at Night swiftly followed; a slower number, also from A Stone's Throw. Then Mick took a rest from vocal duties and introduced organist George Zoot Money ('I used to go and watch him play at the Flamingo Club when I was a 15 year old') who sang an extended Gospel song, May the Circle Be Unbroken. This led to a wistful post-song musing: 'But of course it always is…sadly. It’s just life, you know?' 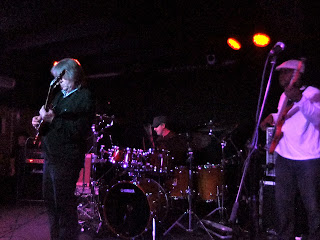 Going South was next up, a very long instrumental which gave room for extended solos from all of the band over the course of its 20 minutes. It was more Santana than Taylor. The rest of the band were introduced during the song, revealing that we had Jeff Allen on the drums, Michael Bailey on Bass and Robert Awhai on rhythm guitar.
Before the next song, there was a little bit more interaction with the audience which went something like this:
'This is a quieter song – promise!'
'We don’t want quiet!'
'Yeah, but I do! All this loud music…I’m going unplugged from now on.' 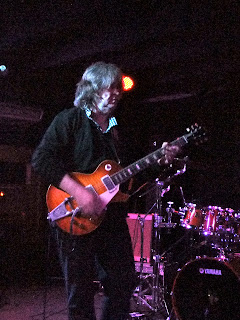 The song in question was No Expectations, the first Rolling Stones song of the evening (although it was from the time before Mick replaced Brian Jones). This version was faster than the original, heavy on the trademark Taylor slide, and was probably the highlight of the evening.


Stop Breaking Down was next; a Stones song Mick did play on originally, albeit one written by Robert Johnson. Suddenly we were into 'last song' territory and it was back to A Stone's Throw for Losing My Faith, which sounded very Clapton-esque.

The band left the stage but came back on after a minute or so. Zoot announced: 'Can’t go on without a bit of Chuck Berry up you’re a***' before taking the vocals on Promised Land. 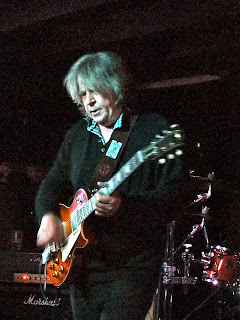 True - it was not a slick or polished evening but it was a very entertaining one nonetheless.


Keep up with the latest news and tour dates over at the official Mick Taylor website.
Posted by Sean Marsh at 12:18

I was looking for some review and photos from this Mick Taylor show!
Thanks!
Quique

yes thanks for keeping me up to date on Mick, p.s. Santana is up Mick's alley, his playing on theStones' "Can't You Hear me Knocking" is just one example. Allan Clark.