Continuing our review of some of the most interesting new music, it's time to look at Hillfolk Noir and their CD, Skinny Mammy's Revenge: The Gage Street Market Sessions. 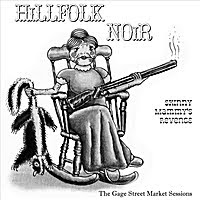 I thought for some time about how to sum up the sound but I couldn't produce anything more pertinent than the official word:
'Filtered through a half-century of folk, country and rock 'n' roll, and fed by family history and an affinity for acoustic mountain music, medicine show culture and Depression-era string-band blues, Hillfolk Noir's latest recording is raw and real, captured ''live'' around a single mic in a series of on-location field sessions in various log cabins.'
Or, to cut a long description short, there's the single word answer the band themselves have devised: 'Junkerdash'!
Skinny Mammy's Revenge was '...recorded with one microphone to 1/4'' tape at the old Gage Street Market' and that certainly comes across in the very earthy, roots sound. It's raw and blatantly unpolished; the sort of music one can imagine being played in the backyard or on the doorstep. It's the immediacy which is appealing.
The track listing easily reveals the type of song to expect. Hope, Depression, lost opportunities, unrequited love and trains are all well to the fore.
Red Eyed Crow
Dying Bed Blues
Run, Mollie, Run
Somefolk
Washboard Blues
The Lord Will Come
Do It Again
Broken Record
L&N
Ragged and Dirty Blues
Choo Choo Stomp
Sail Away Ladies
The Love I Thought I'd Never Know
Before the Farm
Mr. Wilson's Lament
Charming Betsy
Jack of Diamonds
Coo Coo
Fast Train Blues
Train Comes Along
Personel-wise, there's husband and wife Travis and Ali Ward (Travis wrote all of the songs), plus Mike Waite and Jared Goodpastor. 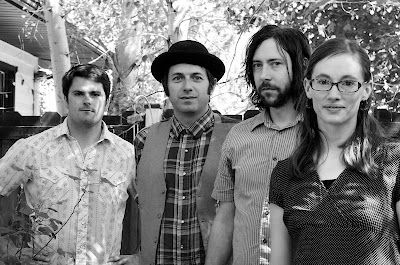 The official division of labour reveals some unusual instruments:

Alison Ward: Laundraphone, banjo, saw, singing
Mike Waite: Stand-up bass
Jared Goodpastor: Snare, tambourine, floor
It's always interesting to read the thoughts of artistes.
Travis says: 'We basically make the music for ourselves because we love it; we are having a great time and hopefully that is infectious. We sing and play our guts out - every song. We've definitely grown into what we are. Whether it's backwards or forwards, we're not real sure, but I guess we don't really care either.'
'None of it is really contemporary, but I think our attitude is,' says Ali.
'Part of the attraction also is that it's raw,' adds Waite. 'There's no pretentiousness in this kind of music, it's direct. I think people are kind of surprised that they like us, but that's rewarding.'
It's rewarding, too, to play the CD several times before judging the music. At first it's a little tricky to keep the songs settled in the mind and some of them sound similar before repeated listenings reveal the nuances and changes of mood.

For further details about Hillfolk Noir, head for their official website and this page on the Brookfield Knights site.
Posted by Sean Marsh at 07:41