Our Mike Closs Memorial season has been going very well and the website has attracted considerable attention, particularly the excellent ‘Game of the Month' features presented by the inimitable Peter Lalic.

It’s time now to share a few more personal memories of Mike (part one can be found here).


We played against each other many times and, of course, played very successfully side by side for both Guisborough and Elmwood. The following game is one of very few we played together, move-by-move. It has survived because I included it as a trinket in one of my old Guisborough Chess Club bulletins (those with good memories may remember reading ‘Guisborough Knights’). 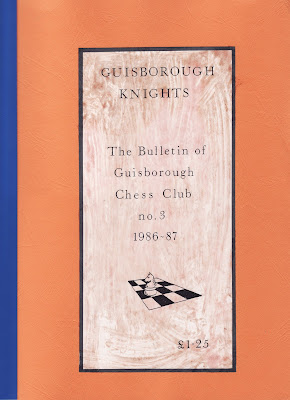 A blast from the past!

I’m glad we recorded the moves as the game conjures up lots of memories of fun times back in our Guisborough days. We were young and very keen.

Mike was proud of his Mephisto MM2. He used to talk his way into entering it into 5-minute tournaments at Guisborough Chess Club. The wisdom of his ways was eventually revealed one night when he pretended having trouble starting a game against it. He kept playing 1 e4 and pressing 'restart' until the machine played 1 ...e6, because he had found a flaw in its repertoire which he knew he could exploit.

In this game, which was played at my home while we were preparing for some tournament or other, Mike and I collaborated to try and crush the monster. It used to score heavily against us, but this is the only game against it we preserved!

Mike was already reaching for the 'restart' button. 'Leave it!' I said, 'I know a bit about the English!' 'Oh, go on then,' he replied. Under pressure not to stumble into a line I didn't know, and conscious of the fact that I couldn't allow the computer to make a lot of moves without it pausing for 'thought', I played...

'A typical computer move', I wrote at the time. I think this Bishop is better off on b2. They don't play like this these days. 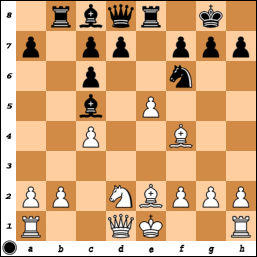 Did Mr Metal (as we always called Mike's chess computers) really believe we'd carelessly allowed our Knight to be trapped? In fact it was an intentional piece of bait. We could always start again if it didn't work. 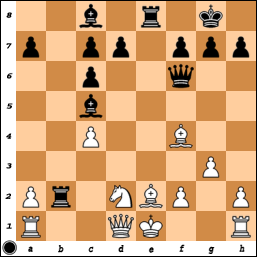 Big problems on f2 and the a1–h8 diagonal mean that White has to bring out his King.

I remember we were getting quite excited at this point. Oh, to be 21 again! 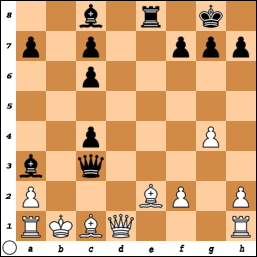 Modern machines tell us that both 17 ...Bxg4 and 17 ...Bf5+ lead to speedier victories, but then we'd have been robbed of an example of tripled pawns.

Thank you for the kind offer of a Bishop, Mr Metal - but we prefer to sacrifice pieces. 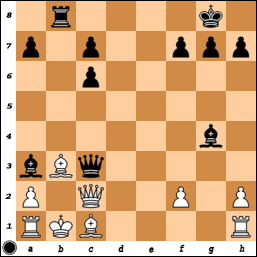 Two more sacrifices should do it... 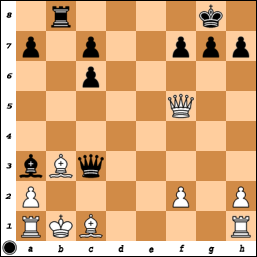 The 1980s saw us playing in lots of weekend congresses together. His luggage consisted of one suitcase full of cosmetics and clothes and one crammed with chess books (nearly all on 1 e4 openings, although there was a solitary 1 d4 opening book; he was trying to learn the Nimzo-Indian at the time).

I remember him telling me one Saturday morning that he had forgotten to pack his underwear. It was to our mutual good fortune (we shared a room) that the tournament in question was played at the top of Newcastle’s Eldon Square shopping centre. The plan was to pop down to the shops between rounds two and three. 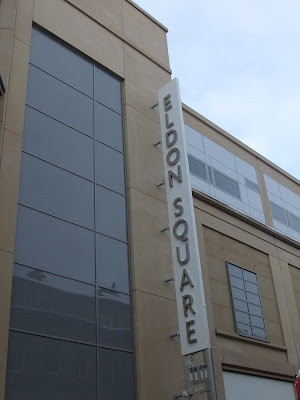 On and on his game dragged on. He stood worse against a Caro-Kann Defence (never his favourite) but put up terrific resistance. We were worried for some time that he wouldn’t have time to go shopping before round three and I was reluctant to go and buy the necessary items on his behalf. Guessing the size incorrectly would lead him either feeling insulted or receiving a boost to his ego and I desired neither of those possibilities to become a reality.

Eventually the game was over but still he nearly missed his shopping opportunity, because he felt compelled to conduct a lengthy post mortem. Luckily, he still had just enough time left to carry out his secret mission before the third round of the tournament started. He was pleased – I was delighted. 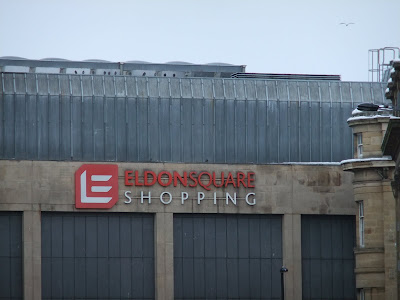 Brief encounter - Eldon Square as it is today

Mike didn’t relish endgames quite as much as openings or middlegames. At the start of the game, he was very happy to show off his preparation, which became extremely deep in his latter years. He had a brief dalliance with Queenless middlegames when he tried out The Lion in a few games during the course of one season, but generally he was much happier with the Queens still on the board.

I remember seeing one particularly impressive exception, which made Mike very happy. 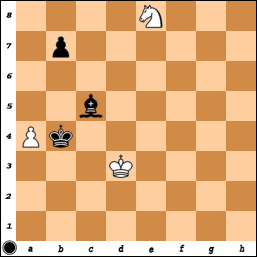 M. McKenzie v Mike Closs
Cleveland v Northumberland
It seems that the game will soon end in a draw. However, Mike's ferocious will to win would often lead to him playing on for as long as possible in the hope of finding some little trick. 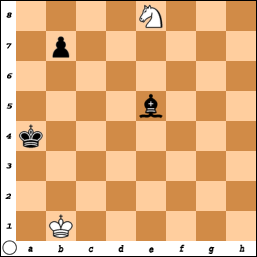 It wasn’t his only successful endgame, of course. I remember watching him hold the inferior side of King v King and pawn in a junior tournament when we first started to get to know each other. His exemplary technique in holding the opposition stuck in my mind. Before the start of that game, he and I had been reading the pairings. His opponent was called Haddock. He asked if I knew anything about him. ‘No, but it all sounds a bit fishy’, I said and he replied, ‘Yes, but he’s had his chips’. It was the first time we traded puns – but obviously not the last.

We played side by side in a couple of simultaneous displays. Actually, we did this from both sides of the board. We turned up to watch a junior tournament a very long time ago, and were cast as ‘local chess celebrities’ before we knew it. We were invited to give a simultaneous display, making alternate moves on each and every board. The number of opponents grew rapidly as the tournament games finished (we worked out later that we were not celebrities at all; we were just being used to keep the children quiet before the prize giving).

After a while, I found myself a Queen down in a couple of games and then things started to get somewhat worse, with Rooks disappearing between my visits to the board. I called Mike to the middle of the simultaneous ring for a word and asked him politely to stop sacrificing so much and to take the games more seriously. Soon, I told him, it would be too late to fight back and nobody who gives a simultaneous display wants to end the session with a string of losses. Mike looked at me and laughed. He had been waiting for an opportunity to ask me the same thing! It quickly became apparent that some of the juniors had been taking full advantage of the lack of continuity in our visits to the boards and had been taking pieces off when neither of us was looking.

On the other side of the board, we sat next to each other when we faced David Bronstein and Mikhail Suba back in the early 1990s. Against the former, Mike lost as White in a text book example of a well-played Sicilian. I even used it in my article about the event in CHESS Magazine, which gave Mike mixed emotions (although it was with his full consent!). The fame, he enjoyed…but to see a loss published…! 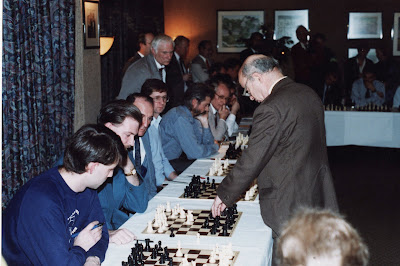 Me, Mike, John Suscens and David Wise all watching a Sicilian Defence appear. Note that David Bronstein was happy to alternate the colours!

Against Suba, Mike held a draw as Black in a long King’s Indian encounter. This was around the time that Suba had released the first edition of his excellent book, ‘Dynamic Chess Strategy’. Mike had bought a copy and brought it along to be signed by the author afterwards. During the game, the book was nowhere to be seen. It turned out that Mike had the book resting on his knees under the table, held open on a certain page…which just happened to feature the very line the players were contesting over the board! 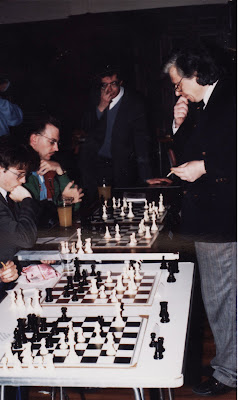 Mikhail Suba (back in the days when smoking was allowed at chess events), probably thinking he'd seen the position before somewhere. So had Mike - under the table! Julian Allinson is sitting next to Mike (Julian won the Memorial Tournament last year) and David Smith is watching the game. The hand with the crisps belongs to Jay Stockham. 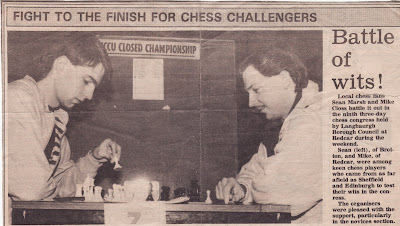 We made the papers a few times. Because we stayed and watched every game at a congress, we were usually easy targets for the photographers. I remember Mike was a bit annoyed because the photgrapher kept calling him 'Mitch' instead of 'Mish'!

Part three of 'Memories of Mike' is currently in preparation.