My quest for entertainment recently took me to three fine concerts. It should have been five, but things don't always go according to plan....
Emmylou Harris
Newcastle City Hall
10.9.2008 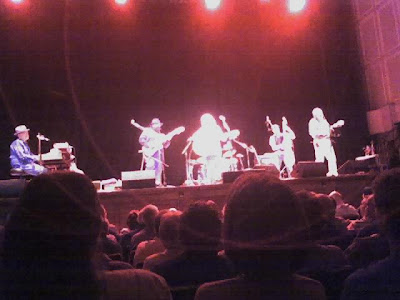 (Please excuse the poor quality of the pictures. I was relying on the camera on my phone and it struggled to rise to the occasion. Nevertheless, the pictures are included to merely provide a flavour of the occasions. A simple Google search should unearth better pictures for the curious.)

It was a real pleasure to Emmylou Harris. She is one of my absolute, all-time favourites and possesses the finest singing voice I have heard.

She looked and sounded amazing. The two-hour set feaured a sprinkling of the new songs from her most recent CD, 'All I Intended To Be' but there was plenty of room for material from all through her career. 'Pancho and Lefty', 'Red Dirt Girl', 'The Pearl' and 'Born to Run' were the stand-out songs for me.

The five-piece band was on great form too, displaying a mastery of all sorts of instruments (various guitars, drums, mandolins, violins, accordian, various items of bass etc).

I hope it's not too long before Emmylou comes back within reasonable striking distance. She's a simply wonderful artiste.

Stray Cats
Manchester Academy
11.9.2008
I’ve never seen Stray Cats live but have wanted to for some time. When they announced their ‘Farewell European Tour’ I pounced on a ticket a.s.a.p. Unfortunately, things didn’t turn out as planned.

At the end of a terrific show in Brixton on the previous night, when they did three encores and still looked set for more, Slim Jim Phantom slipped and fell off the stage, breaking his wrist in three places. Rather unfortunate, especially for a drummer.

Despite first announcing that the next show would go on, the more sensible decision was taken to fly Slim Jim back to America for treatment. Unfortunately, that meant that I had a wasted trip to Manchester, as I only found out the show was cancelled as I was getting to leave the hotel.
As yet, there’s no sign of rescheduled European dates but we live in hope. 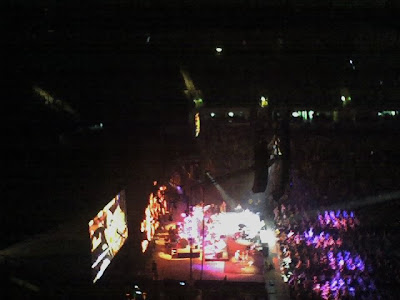 I was pleased to return to MEN Arena, in which I’d previously seen the legendary Santana.
This show was similar to the Santana concert in some respects, such as the numerous drummers, generally large amount of musicians (it was quite a packed stage) and the overall sense of rhythm.
I don’t know an awful lot of Stevie Wonder’s work but he was always going to run through his classics. I probably recognised about a third of the songs, mainly those at the latter end of the show.
It was a sell-out show and the audience was very appreciative. Everyone had a whole lot of fun.
Amy MacDonald
Carling Academy, Newcastle
5.10.2008
Unfortunately, illness led to the postponement of this show. Fortunately, I hadn’t booked any train tickets or accommodation for this one and I am available for the rearranged date, so all is well.
Bryan Adams
MEN Arena, Manchester
30.10.2008 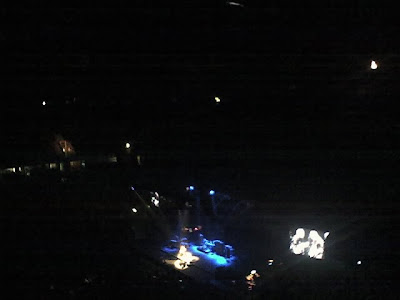 I wouldn’t say Bryan Adams was one of my favourite artists, but certainly, it’s easy to listen to most of his work. In fact, it can be a surprise to most people when they stop to think how many of his songs they actually know.

In the 1980s, wiser heads than mine realised that any cassette tape left in a car for more than a couple of months somehow managed to undergo a curious metamorphosis into ‘Queen’s Greatest Hits’. That’s exactly the reason why the whole world grew up knowing so many Queen songs. 20 years on, car cassettes have been completely outmoded by CDs and the modern metamorphosis changes them all into ‘Best of Bryan Adams’ discs. 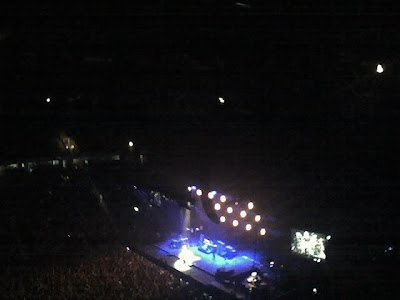 Anyway, I knew the show would be an entertaining display of pop-rock and going to such things keeps me off the streets. In fact, I was pleasantly surprised; the show was much better than I was expecting it to be.

Emerging through the crowd to a small stage in the middle of the standing area, he started off with a number of powerful acoustic numbers, before pointing to the main stage and shouting, ‘The band!’ The stage, formerly in darkness, was instantly lit up and the band started playing as Mr Adams started to wend himself towards them, shaking hands all along the way. With a final wiggle of his bottom as he ascended the stage-side ladder, he joined the band and launched into hit after hit after hit.

It was a very energetic performance and it was probably the noisiest audience (in a good way) that I have known. At one point, a young lady, randomly selected, was invited onto the stage to sing a duet. She did well!

The energy levels didn’t dip all night. The encore lasted for five songs (the last three acoustically solo) and then suddenly it was time to go home.

A very impressive display! If any readers have the chance to see Mr Adams and co. doing their thing, I’d advise them to snap up the opportunity. It won’t be regretted. 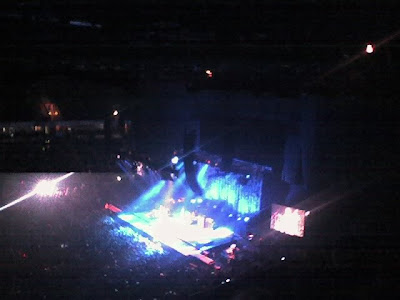 Coming up next in my quest for entertainment....the 'Dimensions' Doctor Who Convention at Newcastle. A full report will naturally appear in due course.