Time is running out to see the David Bowie Is exhibition. In just under two weeks it will be leaving the V&A museum and heading elsewhere.
Online tickets sold out some time ago but they release 450 new over-the-counter ones each day at the V&A. They open at 10 a.m. One day last week, I got there around 9.20 a.m. and there was already a sizable queue. Within a couple of minutes (literally) the queue had at least trebled. I gained some hope when I realised that some of the people ahead of me already had tickets.

Once inside the V&A, we formed another queue that stretched and twisted through various display areas. In all, I queued for approximately two hours before getting to the sales' desk and successfully obtaining a ticket. 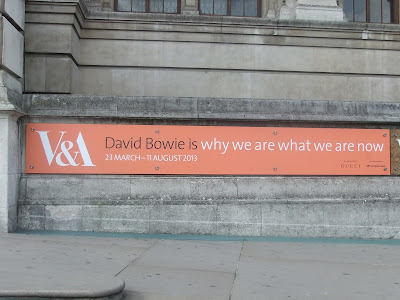 The exhibition is incredible. There's authentic costumes from Ziggy onwards, huge video screens replaying concert footage, hand-written lyrics and numerous other items. Information is automatically relayed through a headset (no extra cost). It took me just over two hours to see everything. It was packed with people and at times not so easy to see a particular part of a display, but one could always double back at any time.
Undoubtedly one of the most impressive exhibitions I have ever seen, David Bowie Is really brings home how much of an influence David Bowie has been for such a long period of time.

The Bowie theme extends to copious amounts of merchandise in the shop and even the cafe.

The exhibition is moving to Canada (Toronto) soon and will then travel to Brazil early in 2014. There's also going to be a live relay from the V&A at 'selected cinemas' on 13 August. Catch it while you can!

For further details, head for the official exhibition site.
Posted by Sean Marsh at 01:05