The Secret to Chess
How Grandmasters Find Amazing Moves
By GM Maurice Ashley
Four Hours
ChessBase
'On this DVD, Maurice Ashley reveals a simple idea that will forever change the way that you see chess. He shares the secret he discovered on his path to the Grandmaster title, a secret that every chess player must understand in order to reach the highest level.'
In real life, we are bombarded by people telling us they know 'the secret'. What secret does Grandmaster Ashley know about chess that will help all chess players? It's intriguing.
There are four sections to the presentation.
Introduction
12 videos on the secret
10 videos featuring puzzles
Outro
In the introduction, GM Ashley tells how he had a revelation: chess is similar to Aikido, where one can use the opponents' own energy to defeat them. In a nutshell, this is explained by the phrase: 'Every move you make has a drawback'. The logic is that whatever your opponent moves, some part of the position has been weakened. The first example shows this graphically. 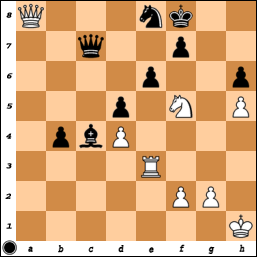 Andriasian - Anastasian
Black now played his pawn to b3. The question is: 'What squares are no longer defended?' a3 is the easy answer; White now finished the game in a couple of moves by exploiting this new weakness, starting with Qa3+.
The examples move up to the highest levels, showing how the drawbacks to moves even influence the outcome of battles between Kasparov and Karpov.
The recommendation is to train one's thinking to make it easier to make moves embellished with good points and very little drawbacks, while exploiting the opponent's lack of wisdom in this particular area.
Following the illustrative games, the viewer is invited to work through a number of puzzles to develop understanding of The Secret at work.
Here's one of the easier ones for you to try: 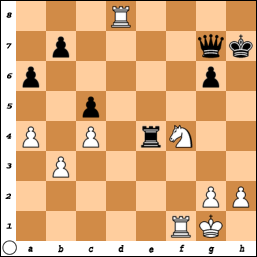 Iotov - Manolache
30 Nd5?? 'A serious howler'. Work out what has been weakened and exploit it.
My thoughts on this are that 'The Secret' to chess is the same as it has always been - if you play consistently stronger moves than your opponent, you will probably win the game. The DVD brings up some interesting analytical points, but I'm not entirely convinced that the big revelation will lead to a major increase in playing strength.
However, GM Ashley is a good presenter and the DVD is entertaining enough.

Power Play 14
Test Your Tactics
By GM Daniel King
Six Hours
ChessBase
'On this DVD Grandmaster Daniel King:
- demonstrates typical tactical patterns;
- shows how strong players use their tactical awareness;
- puts your tactical abilities to the test.'
The Power Play series is one of the jewels in the ChessBase crown and GM King is possibly the best presenter of Fritz Trainer DVDs. The combination of the two leads to a typically instructive and enjoyable product.
GM King explains how the key to to increasing one's tactical power is to get to grips with the various patterns and to learn how to recognise more and more such patterns. One way to do this, he advises, is to play through simple exercises in books on tactics.
The first video lecture on this DVD whets the appetite nicely by showing some examples of how strong players use such pattern recognition skills.
Things follow the usual Power Play format; the viewer is put to work on various positions from real games, starting with an encounter between Topalov and Anand from 2006. At certain points in the game, GM King asks the viewer how to proceed and the correct answer is revealed in subsequent videos.
Here's a delightful couple of moments from one of the greatest of all players, fully analysed on the DVD. 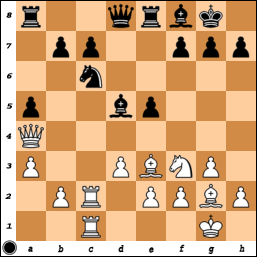 Botvinnik - Portisch
Black offered a little piece of bait with: 15 ...Nb8 16 Rxc7 Bc6 It is well known that Rooks can be trapped in this way after snatching pawns. Yet Botvinnik saw a little deeper...17 R1xc6 bxc6 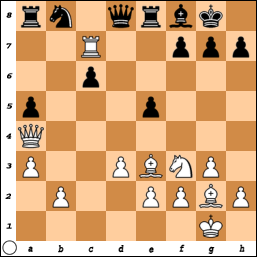 ...and now he completed his Rook-based surprises with the stunning 18 Rxf7! 1-0 (26) Have fun working out what would have happened if Black had played 18 ...Kxf7.
There's another good piece of advice to the end. Viewers are asked to go back to their older games to find the same tactical themes presented on the DVD. This should lead to a deeper understanding of tactical motifs. After watching the DVD, such things should be easier to spot.
I hope there are yet more Power Play volumes to come. This one certainly maintains the high standard of the earlier offerings.
For further details regarding ChessBase products, click here. 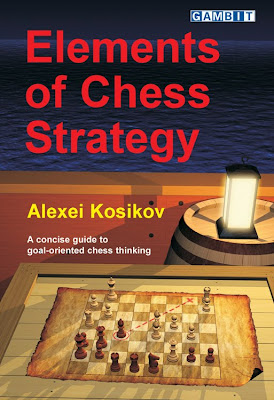 Elements of Chess Strategy
By Alexei Kosikov
160 pages
Gambit Publications
'The book examines a question of great importance to chess-players of any level - how to study the strategy of the middlegame.'
To that end, the author presents his material over the course of five chapters, namely:
Devising a Plan in a Game of Chess
'STOPS' - A System of Self-Discipline in Chess
The Advantage of the Bishop-Pair
Warning - Trap Ahead!
Opposite Bishops in the Middlegame
Readers are requested to attempt a series of exercises throughout the book, starting as early as the second page of the first chapter. Here's an example of what to expect: 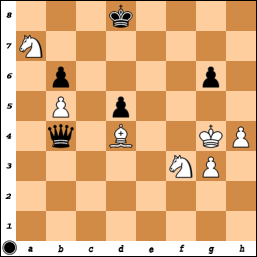 1) Identify the chief strategic elements.
2) Give your evaluation of the position.
3) In Black's place, what would you play?
Hmm...not so easy! In fact, the more I looked at the contents of this book, the more I came to realise that is offering some serious study material which lifts it clearly beyond the level of a standard primer aimed primarily at improving club players.
STOPS - a system of self-discipline - is an acronym: Self-control/Tactics/Objective evaluation/Prophylactic thinking/Staying calm make up the STOPS system, which the reader is encouraged to follow. As usual as such a system sounds - and as much as I have always admired by the master of chess acronyms, GM Motwani - I have yet to encounter one which would actually work in the heat of the battle; generally speaking, they don't appeal to me (but I'd be happy to hear from anyone who can testify to their worth as a practical application). However, the chapter is very short compared to the rest.
I like the way that oft-quoted pieces of advice are brought to life with pertinent game snippets. Here's a simplified demonstration of one of the easier examples.
'Chess-players have some reason for saying that an extra benefit of the two bishops is that you can always exchange one of them advantageously' 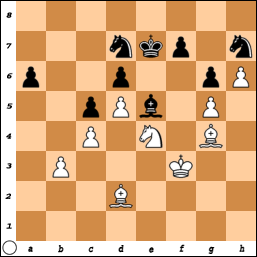 Dzhindzhikhashvili - Dementiev
Kaliningrad 1972
51 Bxd7! Kxd7 52 Bf4! Bxf4 53 Kxf4 Ke7 54 Nf6! and 1-0 (58)
Bishops receive considerable attention. I did rather get the feeling that this book was assembled from various coaching articles, rather than written as a dedicated project on the subject of chess strategy; there is slight problem with the balance of the material.
Ultimately, this is a book with some very good material which requires determination from readers with a strong desire to improve. Club players may be a little bit out of their depth, but those who play in Open tournaments will find some great study material. 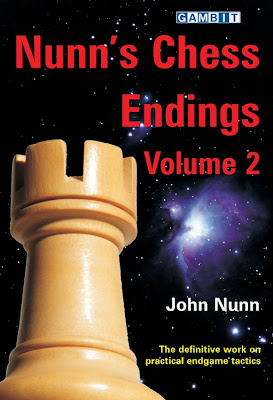 Nunn's Chess Endings
Volume 2
By GM John Nunn
352 pages
Gambit Publications
The second of this two-volume series covers Rook endings and those with Rooks and Minor pieces. Volume 1 set a high standard.
Following a short piece explaining Conventions and Terminology and an Introduction, it's straight into the main content. In fact, there are only two chapters in the book and they are numbered 8 and 9 to provide continuity from the first volume, but the first chapter in this volume weighs in at just under 300 pages.
The introduction sums up the point of the work very clearly:
'The main content of Nunn's Chess Endings is the careful analysis of hundreds of instructive endgames from practical play. By skipping the elementary parts, I have been able to go beyond standard endgame texts to consider more complex positions. In some cases I have been able to identify new and important motifs which occur in over-the-board play, but which are often overlooked even by very strong players due to their unfamiliarity.'
Chapter 8: Rook Endings
'It's not just the frequency of rook endings which demands such thorough coverage; it's also that rook endings are very often misplayed over the board. Even grandmasters are prone to making a mess of rook endings and, surprisingly, many of these mistakes could have been avoided had the players possessed more theoretical knowledge.'
The combination of GM Nunn, Deep Fritz and Rybka is obviously an absolutely formidable one and together they have overturned and improved plenty of older analysis.
Things start off 'simply', with a position featuring King and Rook v King and pawn. 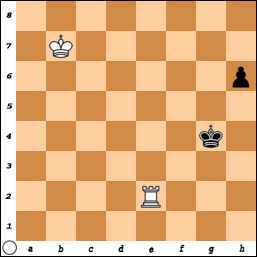 J.Fries Nielson - Plachetka
You'll have to see the book for the detailed analysis, but to cut a long story short, White only drew after 1 Kc6? when only 1 Rg2+! would have won the game.
By the end of the chapter, the examples have worked their way up to positions with four Rooks and a number of pawns. 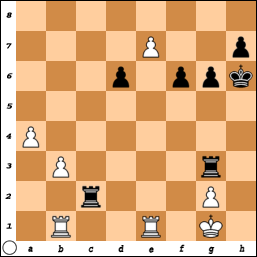 Korsunsky - Khantadze
1 Kh2! Rgxg2+? Black lost quickly after this obvious and very tempting capture. Gelfand thought the whole ending was lost, but Dr Nunn shows a drawing line starting with 1 ...Rcxg2+
Chapter 9: Endings with Rooks and Minor Pieces
Starting with positions in which one side enjoys the advantage of the exchange, this chapter works its way through various combinations of material, such as Rook and Bishop v Rook and Knight and Rook v two Bishops.
It's always interesting to see missed opportunities at a high level. It must be annoying and frustrating to let a big fish wriggle free from the hook when the end is in sight and the position is down to the 'matter of technique' stage. Black should not have lost the game from here. 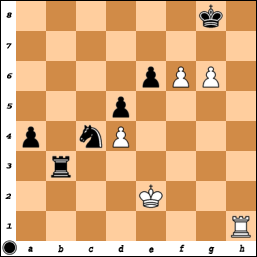 Korchnoi - Elson
1 ...Rb8? (1 ...Nd6! was best and should win) 2 Rh7 Nd6 3 Rg7+ Kh8?! 4 Rd7 Ra8? 5 Rxd6 Kg8 6 Rd7 1-0
John Nunn has consistently produced top quality works on the endgame. His tremendous knowledge and experience - backed up by the strongest of computers - have created a marvellous volume packed with fascinating examples of practical endgame play. This is definitely the pick of the bunch from Chess Reviews 152.
Full details about Gambit chess books can be found here.
Posted by Sean Marsh at 07:47