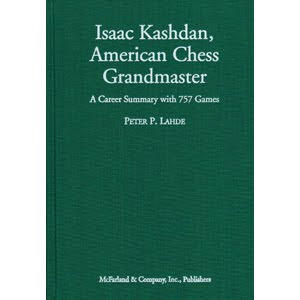 McFarland & Company have once again come up with an impressive volume on an under-publicised chess figure.

The Fifties The Later Years

As the title of the book suggests, this is not meant to be a complete biography but at just under 70 pages it does pack in a lot of information. I’ve certainly read some chess biographies will less meat than is served up here.

Isaac Kashdan’s chess strength steadily grew, as did his confidence. In a letter dated October 11, 1933 he opened negotiations with the legendary Frank James Marshall, reigning US Champion, with a view to a title match.

‘Will you name a time and a place that will be convenient to you? We can then discuss the various matters that may come up in arranging the match, and I trust bring it to an early fruition.’

They met soon afterwards to agree on terms but the great depression ruled out the prospect of the challenger raising the quoted $5,000.

Nevertheless, some good did come from Kashdan’s initiative. It was the beginning of the end of the US title being the property of Marshall and a tournament was eventually arranged to decide a new champion in 1936. Unfortunately for Kashdan, the emergence of Reshevsky and Fine made life over the board a lot more difficult. Kashdan did manage to share first place in the 1942 championship tournament but lost the play-off with Reshevsky by 3.5-7.5.

Kashdan was an integral part of the very successful USA Olympiad team in the late 1920s and throughout the 1930s. The author presents a very impressive summary of his exploits.

After 1955, Kashdan’s chess duties switched mainly from over the board to behind the scenes. Most famously, he was the director of the classic Piatigorsky Cup tournaments of 1963 and 1966. The latter event featured a remarkable comeback by Bobby Fischer, who very nearly caught Spassky at the end, despite a terrible start to the tournament. Earlier on, Kashdan’s wife (Helen) was delegated to track down a smaller chess set for Fischer to play on, as he declined those on offer.

There are several good photos too, from various stages of Kashdan’s life. Most of these were entirely new to me. The most recent one shows Isaac and Helen at the 1983 US Open. He was recovering from a stroke at the time and lived for two more years.

The Games of Isaac Kashdan

This is the largest section of the book, running from page 73 to 302. The author has done very well to collect 757 Kashdan games (a standard database contains juts over 400). Given his rather low historical profile, the vast majority of games should be new to most readers.

The author’s impressive amount of research uses numerous contemporary sources.
Many of the games feature annotations by Kashdan himself and others have notes by the likes of Alekhine, Fine, Reinfeld and Santasiere. The latter provides some authentic Wartime satire in his notes to game 477, in which Kashdan used 1 e4 e5 2 Nf3 Nf6 against Pilnik in 1942.

‘The rarely seen Petrov Defense or Russian Defense, a great favourite with Kashdan, Marshall and Hitler!!’

There are a couple of editorial lapses.

Game 200 is a fabulous shoot-out with Alekhine. The note to the diagram after White’s 68th move claims it depicts the position ‘after 24. Rd5’ (a move which didn’t appear in this game). 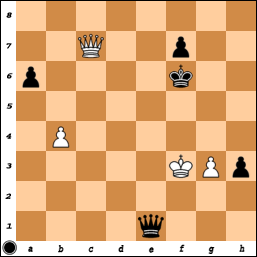 Kashdan’s own notes from Chess Review are quoted, but they refer to the wrong move number.

‘In order to approach the pawn with the king, and also to prevent the immediate exchange of queens. BUT - 68...Qe6?? A complete miscalculation, which sat once throws away the fruits of very considerable labor. After three sessions, something over 12 hours all told, I had for the first time in my career obtained a clearly winning position against the World’s Champion. And then to err on a simple matter of counting which every beginner is taught! White’s 68th move b4 gained just enough time to draw in the resulting ending. The correct procedure was 68...Qd5+ 69 Kg3 Qg2+ 70 Kh4 h2 71 Qd3+ Kg7 72 Qd4+ f6! ….’

I think the note can be saved after the next couple of moves: 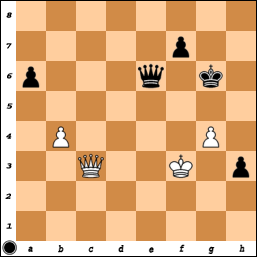 The line quoted above, starting with …Qd5+, should be used after this diagram and I think White’s highlighted move b4 should really be g4.

Black actually played the inferior 70...Qf6+ and the game was drawn four moves later.
Other slips are very minor notational matters. For example, in Game 421... 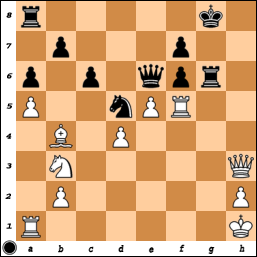 Kashdan - Collins Boston 1938
…the suggested continuation to turn the tables, 29...Nf5, should be 29...Nf4. Presumably these errors were either present in the original archive material of mistranslated during the switch from descriptive to algebraic notation.

There is a lot of great chess to enjoy. 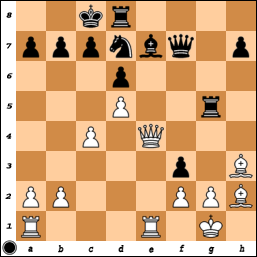 Kashdan - Euwe Hastings 1931-2
Kashdan’s own notes to his victory over the future World Champion are giving in the book. Here’s the very end of the game, showing how even the very best players can be checkmated.

The author highlights a curiosity from the 1931 Olympiad. 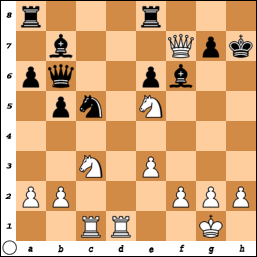 Final position - draw agreed!
This is the position in which the players agreed to a draw. Remarkably, the same position had been reached many years earlier, although that game took a move longer to get to the key position due to mutual extra tempo used in the Semi-Slav opening.

Janowski, another player whose games deserve to be better known (he was far more than mere Lasker fodder) knew how to wrap up a winning attack: 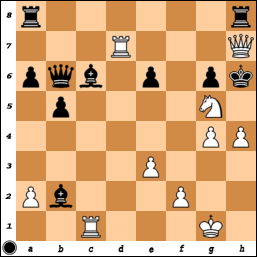 Despite the author’s best efforts, some of Kashdan’s games are still missing. Peter Lahde supplies a list for future chess detectives to get their searching teeth into.

McFarland typically go the extra mile when it comes the indices. Here we have a tournament record, crosstables for tournaments and matches, a useful bibliography, index of players, index of openings by ECO code and a general index.

Production-wise, the book is given the full McFarland treatment. It boasts a handsome, sturdy green hardback cover and paper of a high quality. Just like the contents within, this book should last you a lifetime.