This is much-revised and expanded edition of an earlier work by Dave Taylor, called Ponziani Power published in 2000. 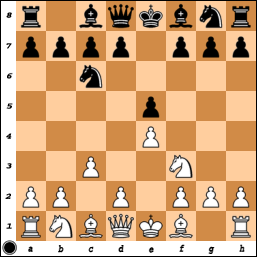 It loos a little passive, at least compared to the Ruy Lopez, in which White crosses the central boundary with 3 Bb5. The justification is given in the following explanation:


The Ponziani is often covered with a quick line or two in opening reference books. This one goes much deeper, offering no fewer than 12 chapters on the opening itself and a final one to round up Black's early deviations.
Theory doesn't advance very quickly, partly because the opening is not used regularly at a high level. Nevertheless, I didn't know that 'The sharp line 3...d5 4 Bb5 can no longer be considered playable for White'.
However, it's not all bad news: 'On the bright side, White's alternative, 4 Qa4, is scoring well.'
It is worth noting that chapter three covers a direct transposition to the Goring Gambit, which might appeal to a wider audience. 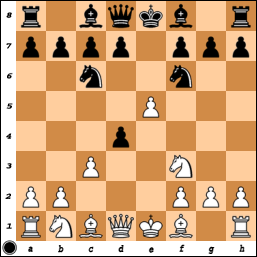 1 e4 e5 2 Nf3 Nc6 3 c3 Nf6 4 d4 exd4 5 e5 is the Ponziani route, giving the same position as 1 e4 e5 2 Nf3 Nc6 3 d4 exd4 4 c3 Nf6 5 e5.
This book certainly provides thorough coverage of the unusual Ponziani, but I'd have liked to have seen a little more on the history of the opening.
The thoroughness should ensure that this is the standard reference work for this particular opening for years to come. The depth means that this is unsuitable for a 'quick repertoire fix'; it will take some time to absorb the detailed material and learn the essential nuances. This book will appeal to players keen to refresh their opening repertoires and who are quite willing to get stuck into a large body of theory.

The heroes in question are Rubinstein, Smyslov, Fischer, Anand and Carlsen. I was rather surprised to see that Tarrasch (often neglected in English chess literature) was not included (few were more classical) but the introduction makes it clear that is a personal choice of heroes.


'My heroes are all supreme in the art of divining and following the strategic and tactical threads of a game. They see chess primarily as an organic whole, not as a series of artificial phases. they don't attack or defend for the sake of it, but only when the position demands it, and they are equally at home whether playing the opening, middlegame or endgame'.


Each hero is covered in turn, chronologically, with some background data and well-chosen illustrative games.


The majority of the games should be familiar but the new notes are mainly in prose form, with variations kept well under control. There's a good balance between the best games of the heroes and little pieces of biographical information. We are spared the dark side of Fischer's personality; it's just not that sort of book. The ethos is to emphasis the best side of each of hero.


My favourite chapter is the one on Smyslov. The 7th World Champion is often in the shadow of some of his more dynamic fellow champions, so it is good to see his games being dusted off for a fresh look.


Smyslov's wonderful demolition of Ribli in game five of their 1993 Candidates' match makes an essential addition to any anthology of his games (I wrote about that game a while ago:
http://marshtowers.blogspot.com/2007/06/archive-uncut-60.html ) His excellent endgame technique is highlighted in a key game from the 1982 Interzonal, the start of the incredible journey which brought him within one match victory of facing Karpov for the title in 1984 (unfortunately for Smyslov, that match was against Kasparov). 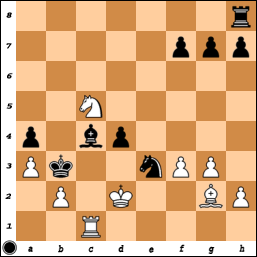 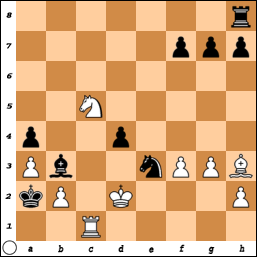 'And now astonishingly only this move wins. Just look at Black's king and bishop! Black's queenside light-square domination is absolute. His bishop defends his a-pawn, which must remain on the board to win the game, and Black's king, knight and rook now combine to end a last try for White on the d-file.'


All in all, this is very readable and accessible volume and one which brings alive games which are 'classic' in more ways than one.


For further details of these and other Everyman products, please visit: 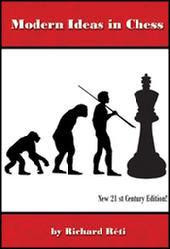 Modern Ideas in Chess
By Richard Réti
132 pages
Russell Enterprises
The mighty Rubinstein is also one of the stars (Tarrasch is there too) of Réti's famous book, now reissued as a '21st Century Edition'.
There's an introduction by Bruce Alberston, Réti's original preface and a foreword by GM Andy Soltis.
Réti reveals the point of the book in his preface:
'I have in this volume attempted to indicate the road along which chess has travelled; from the classicism of Anderssen, by way of the naturalism of the Steinitz school, to the individualistic ideas of the most modern masters'.
Here's a map of the journey:
The Development of Positional Play
Steinitz
The Steinitz School
The Perfecting of Chess Technique
New Ideas
Conclusion
The author essentially takes us on a whistle-stop tour of chess through three ages, namely those of the Romantic, Classical and Hypermodern periods. Along the way he presents impressive games from Anderssen to Euwe (one of the 'youngest masters').
Students of chess history will, again, find the majority of games to be very familiar but there some examples of a couple of 'forgotten' players, such as Breyer. One of the original 'Hypermodern' players, Breyer died young (even before this book first appeared) and the world still awaits a serious collection of his games.
This is the sort of thing we have been missing: 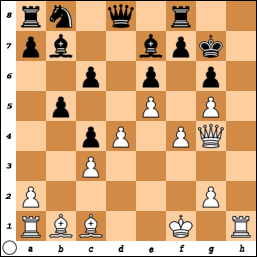 Breyer - Dr. Esser
Budapest 1917
17 Rh7+ Kxh7 18 Qh5+ Kg7 19 Qh6+ Kg8 20 Bxg6 fxg6 21 Qxg6+ Kh8 22 Qh6+ Kg8 23 g6 and Breyer finished off in style.
Very little has been changed of the original text. Naturally, the notation has been converted to algebraic and the layout now enjoys a clean, modern feel. There are numerous quaint comments, authentic for the time (the bulk of the book was written in 1921, and Capablanca was the new World Champion). Here's a couple of examples:
'When Capablanca in his championship match with Lasker gave us at the beginning a very large amount of drawn games, he is said to have expressed himself as follows to a newspaper reporter. Chess technique and the knowledge of openings have progressed to such an extent today that it might, even against a weaker player, be difficult to win a game.'
'Through the world war the old Europe has lost its lead in the world, not only politically, but in culture. Americanism has forced itself into Europe, perhaps transiently, perhaps permanently. Who knows?'
Richard Réti certainly took chess seriously:
'...in the idea of chess and the development of the chess mind we have a picture of the intellectual struggle of mankind.'
'Modern Ideas in Chess' will appeal mainly to readers with an interest in the history and development of chess and to those who would like to build a library of the undisputed classics of chess literature.
For more on books from Russell Enterprises, pop along to:
http://www.russell-enterprises.com/

The Giant Chess Puzzle Book
by GM Zenon Franco
288 pages
Gambit Publications
1001 brand new chess puzzles to challenge and entertain players from novices to grandmasters
One of the main selling points for this particular collection is the freshness of the puzzles themselves. It is claimed that none of them have appeared in such collections before. The initial aim was to ensure that the positions were all taken from tournaments from the last two years and/or the authors own games, but there was, ultimately, some scope to stray beyond those criteria.
The material is arranged thus:
The Most Important Tactical Themes
Elementary Puzzles
On the Attack
Intermediate and Complex Puzzles
Tests 1-5
Defence and Counterattack
Mundo Latino
Tests 6-10
The World of Endgames
Tests 11-15
The Ultimate Challenge
Most of the headings are self explanatory. The chapter 'Mundo Latino' presents 90 puzzles from the games of players from Latin countries, starting with a winning combination by the great Greco from 1620. This is one of the easier puzzles for the reader to solve. 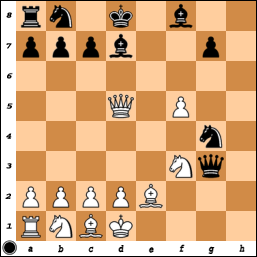 NN v Greco
1620
Black to play
The vast majority of the puzzles are indeed very recent examples and should honour the promise of freshness. Here's an interesting position from 2009. 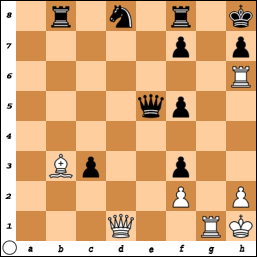 Black has three extra pawns, but this doesn't matter as
White can create unstoppable threats to the Black King
Can you see how? It's not obvious.
Each chapter starts with relatively simple positions, often with small hints, and then works up to tougher nuts. The answers are annotated to assist the learning process.
'The Ultimate Challenge' offers a final selection of 81 brain teasers. Here's one to try: 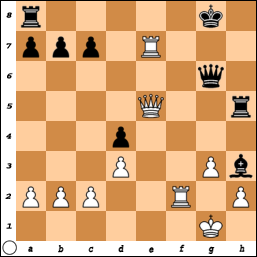 The game went 25 Rf6 and Black resigned. Is there any way to defend?
There's a great deal of fun to be had from this puzzle book, which should suit players who like to test and improve their tactical prowess. Anyone who tackles even just a reasonable percentage of the puzzles should be able improve their own vision and awareness.
For further details regarding the Gambit books, please visit their website: