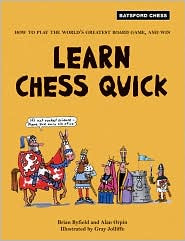 Batsford chess books are a rare sight these days. However, there are several in the pipeline for 2010.

This new beginners' book has just been released. The jokey ethos is established early on: 'As Nigel Short once said, ‘‘Chess is ruthless…you’ve got to be prepared to kill people.’’ Learn Chess Quick is the perfect way to get started. Ideal for bullies, adventurers and psychopaths, and even their parents.’

Having psyched up the reader, the book presents the main contents over the course of five chapters:

The Whole Shooting Match from Start to Finish

The descriptions are generally colourful, such as in this piece of advice, encouraging the reader to leave the slow King behind when confronting trouble.‘Would you send your grandpa downstairs to see off the burglars instead of your beefy marine-corps brothers?’


However, the tone of the book is schizophrenic. On the one hand, the colourful presentation and glossy pages make it ideal for children but then some of the internal cartoons are clearly aimed at amusing an older audience, such as the Miss Whiplash on page 53, giving an apparently naked prisoner King a good seeing to.

‘I like this game - it’s dangerous’ comments the King, with a smile.

So it does indeed enable the reader to easily assimilate the rules of chess, but it is not entirely clear who the book is aimed at.

Nevertheless, there's some nice chess moves towards the end which should provide entertainment.

Here's a couple of samples: 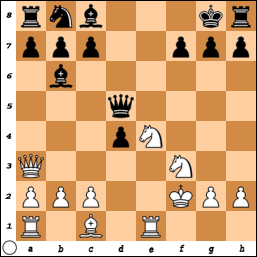 Go on - you can force a mate from here 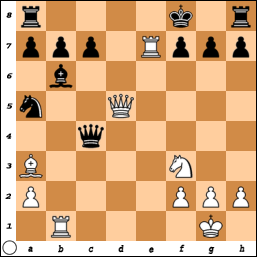 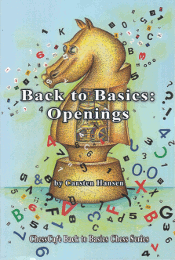 The 'Back to Basics' series is already well-established (earlier volumes are reviewed in my archive) but it has been a little while since the last one. This time the focus is firmly on chess openings.

The author starts with an unexpected piece of advice:

‘…I would recommend you first take a look at some of the other books in this series on tactics and endings, as these will help you better realize the advantages from the positions this book will hopefully help you obtain. Having noted that, this book will certainly assist you gain a solid understanding of chess openings.’

The material is split into the following chapters:

My Own Experiences with Openings

How do I Decide which opening to choose?

An Introduction to Opening Theory

Where do I go from here?

Index of Names and Variations

It's good to get a little bit of chatty autobiographical material. The author owns up to the fact that his own first taste of opening theory wasn't particularly successful; it came when he was a young junior in 1978, on the wrong side of a Scholar’s Mate.

A short time later, he won a book on the 1978 World Championship match and based part of his opening repertoire on Kortschnoi’s games.

Throughout the book, the emphasis is always on understanding the openings rather than just learning long strings of moves.

‘In many openings where the lines are finely balanced, the player with the better understanding has an excellent chance for winning the game.’

To that end, the book is very strong on explanatory text and keeps the branches of variations to a minimum.
For example, in the French Defence, the Classical Variation is covered thus: 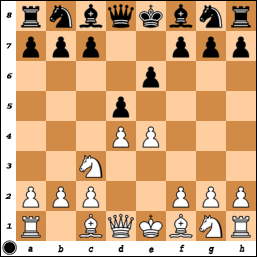 Black tries to force White to close the centre.

The chapter 'Where do I go from here?' is a very useful one, offering expert advice on which chess to buy and how to go about using them.

It is important for a student of chess to make the most of the available time.
This is a good, solid guide to the basics of all chess openings. It would suit adult club players who are making their first explorations into the scary world of chess theory.

The sample given above should enable the reader to judge whether or not the book gives sufficient depth to match current playing strength.


For more on books from Russell Enterprises, pop along to:
http://www.russell-enterprises.com/


Missed a review? Pop along to my archive:
http://marshtowers.blogspot.com/2007/12/chess-review-archive.html
Posted by Sean Marsh at 00:45

As always, very interesting! I would like to ask for a minor clarification: Is the author discussing chess books or chess tools? ("The chapter 'Where do I go from here?' is a very useful one, offering expert advice on which chess to buy and how to go about using them.")

Books tend to be well covered by reviews but DVDs and softwares gets less attention.

The book gives five pages to the discussion on which books, DVDs, software etc to buy. It is in general terms rather than a list of specific titles (although some are given).

Areas of discussion include: 'How much money should I spend on opening books?' and 'Do I really need the book I'm about to buy?'

Sean, Thank you for the clarification! You have added another book to my need-to-buy list.

Shouldn't the title be "Learn Chess Quickly"? "Quick" is an adjective and "quickly" is an adverb. Chess book editing never ceases to surprise me.

You are correct, Howard.

I don't even like the trend of giving books titles in lower case.